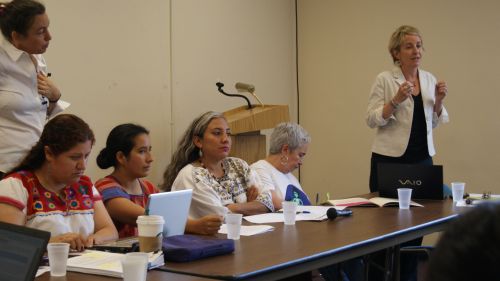 UNITED NATIONS, Jul 19 2012 (IPS) - There has been an alarming increase over the past two years in violence against women human rights defenders and journalists in Mexico, according to women’s human rights organisations.

Reports of violence, threats, sexual abuse and, in some cases, rape and torture, have emerged, but have largely failed to gain the attention of international media, activists said.

“The problem is that the situation is so complex and volatile the journalists who report on that violent situation are targeted by both government and organised crime and there are not enough protections. The government has no interest in protecting them,” said VeneKlasen.

Margarita Martinez, a member of the National Women Human Rights Defenders Network in Mexico, told IPS, “The issue that unites all the different social movements in Mexico is precisely human rights violations.”

Martinez was part of a panel discussion Wednesday at the United Nations Church Center about women human rights defenders and journalists in Mexico.

She described the many abuses that have been committed by the government against women in Mexico, in particular, the indigenous community.

“Under the free trade agreement our territories have been given away to multinationals,” Martinez said.

She has first-hand experience with human rights abuses in Mexico. “In February 2009, I was jailed and tortured and raped and up to now there’s not even been any investigation of the case and that’s why we really need your help.”

Lucia Lagunas, a member of the National Network of Women Human Rights Defenders in Mexico, spoke about the Mexican government’s lack of action on the issue.

“The violation of the rights of women journalists and women human rights defenders is a symptom of the weakness of democracy in Mexico and a product of the totalitarian government, which is disguised as peace,” said Lagunas.

Press freedom groups report that 76 journalists have been killed in Mexico and more than 300 have been threatened or attacked since 2000.

Last year alone, there were 68 cases of attacks against human right defenders, with 41percent being women, according to a report compiled by the Mesoamerican Initiative for Women Human Rights Defenders.

“Currently, Mexico has a very good image internationally. What it has done is try to contain the bad press nationally and really censor, or leave out, or erase all the violence against women defenders and the violations of human rights,” said Maya.

“Up to now the state has been able to defend its image with its control of the media but because of our alliance with progressive journalists that facade is starting to crack,” said Maya.

The media oligopoly was identified as a key factor in government censorship which prevents reports of human rights abuses exiting the country, or being broadcast at all.

“What makes it so challenging in Mexico is the mainstream media is a monopoly of two companies… there’s all kinds of radio and social media but it’s not penetrating that huge monopoly which is the monopoly that works with international media,” VeneKlasen told IPS.

Social media has been an important tool in voicing protests about human rights violations, especially within youth movements. However, there are many regional communities in Mexico that do not have access to the internet.

“We do have links with other social sectors which do use social media even though it’s not present in a lot of our communities,” Martinez told IPS.

Martinez works with her organisation in regional communities, interacting with youth, children, women and farmers to educate them about human rights.

“The organisation is built from the ground up, and you start training leaders so that the grassroots community themselves organise and lead their own struggles,” Martinez said.

Another topic of discussion during the panel was the importance of raising awareness internationally, especially within the United States.

Alda Facio, one of the founders of the Women’s Caucus for Gender Justice of the International Criminal Court, told IPS, “I think the pressure has to be done by U.S. citizens or people living in the U.S. to the U.S. government.”

During the conference VeneKlasen spoke about the cultural, political, economic and social importance of Mexico to the United State, but said the information and analysis about what was happening in Mexico and the role of the United States was “extremely limited”.

The speakers acknowledged that their task would be a very slow process, and a large part of the change would have to occur on a social and political level within Mexico if it were to succeed.

“The legal mechanisms are there, it’s political will pressure that needs to come to bear,” VeneKlasen told IPS.