Full Access to Justice Elusive for Women in Latin America

BUENOS AIRES, Apr 6 2012 (IPS) - Only a small proportion of women in the region whose rights are undermined achieve full access to justice, says a collective of women’s organisations from eight countries of Latin America. 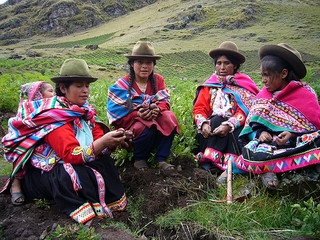 “It’s not just a question of litigation costs or of bringing an issue to court, but of gaining access to good judicial service, in which it is possible to obtain a legal ruling in a reasonable period of time,” one of the activists who denounced the situation, Natalia Gherardi, told IPS.

But even when they manage to overcome these barriers, they often find “a courtroom burdened with gender stereotypes,” which she said was the result of a lack of sensitisation efforts and would require “a cultural change in society.”

A report on the issue was presented in late March at a hearing before the Washington-based Inter-American Commission on Human Rights (IACHR) by the Articulación Regional Feminista por los Derechos Humanos y la Justicia de Género, a regional feminist network for human rights and gender justice that was created in 2004.

The women active in the regional network, who belong to organisations from Argentina, Bolivia, Chile, Colombia, Ecuador, Guatemala, Mexico and Peru, asked the IACHR to hold a “special hearing,” with two aims.

“One regional political objective is to draw the IACHR’s attention to problems that go beyond the borders of any single country and that show up as a pattern of behaviour in countries with diverse economic and social realities,” Gherardi said.

This wakeup call is key, the activist said, because of the role that the IACHR can play in getting governments to follow up on these issues, by means of visits, special reports and other actions.

The second objective of bringing the issue up in a forum that oversees each country’s compliance with human rights commitments is to show the importance that the international community puts on internal problems.

In its report, the regional feminist network denounced to the IACHR that advances made in gaining rights have not been reflected in a transformation of the reality of many women in Latin America.

Besides ELA, the regional network includes the Corporación Humanas branches in Chile, Colombia and Ecuador; the Coordinadora de la Mujer, of Bolivia; La Cuerda, of Guatemala; Equis: Justicia para las Mujeres, of Mexico; and Demus: Estudio para la Defensa de los Derechos de la Mujer, of Peru. Carolina Carrera, head of Corporación Humanas Chile, told IPS that turning to the IACHR helps “visibilise” problems that have been repeatedly denounced in countries in the region, but that persist, such as the problem of gender-based violence.

There are also new challenges, she said, such as the lack of access to justice faced by indigenous women, or the poverty suffered by elderly women who are unable to access legal assistance to defend their right to a pension.

Carrera said one of the main hurdles is seen at the legislative level. In many countries, laws on violence only cover domestic violence, leaving aside the question of impunity for gender-based violence committed in other spheres.

Through its Observatory of Judicial Sentences, the regional feminist network monitors legal verdicts involving women, and says it has found “patterns of systematic violations of women’s rights” in the region.

This is seen mainly in cases of violent crimes against girls and women, but also in cases of sexual and reproductive rights – such as the denial of emergency contraception or abortion in cases of rape – or cases involving economic, labour, social or cultural rights.

And the more marginalised women are, the bigger the barriers they face when it comes to gaining access to justice, the groups said. This means that poor, rural, and indigenous and black women face especially large hurdles when it comes to getting their rights respected.

In Argentina, a case in point is the problem of access to abortions for women in cases in which it is legal, such as when the pregnancy is the result of rape or incest, or when the pregnant woman’s life or health are in danger.

Gherardi said doctors refer many pregnant women in these situations to the courts, where they end up seeking authorisation that is not even required by law – and which, if it is secured, invariably arrives too late.

And in Colombia, women victims of violence are required to take part in a hearing aimed at “reconciliation” before the case goes to court – a process that means further delays in cases involving rape.

The report cites the case of a girl who was raped by her father. The case has spent four years winding its way through the courts, without charges being brought against the father, while the girl has been forced to provide painful testimony over and over again.

In Mexico and Chile, the justice system offers the possibility of suspending legal action brought by women in situations of violence and opting for alternatives that do not imply penalties – which has led to “an alarming rate of impunity” in cases of violent crimes, the report says.

Carrera also pointed to the case of Chilean Judge Karen Atala, who was denied justice because of discrimination. In a landmark ruling in March, the Inter-American Court of Human Rights ruled that Chile must pay damages to the judge, who was denied custody of her three daughters by the Supreme Court because she is a lesbian.

Another high-profile case, which forced women to turn to the Inter-American human rights system, was that of Gabriela Blas, an Aymara Indian from