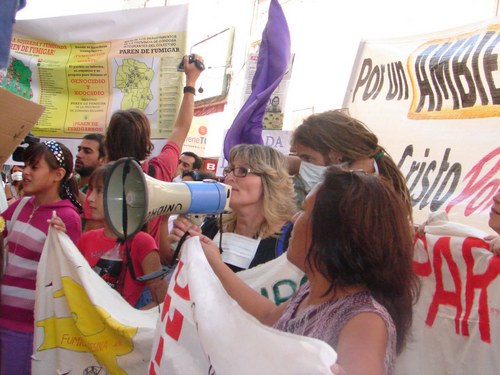 Sofía Gatica, with a loudspeaker, at a protest against agrochemicals. Credit: Mothers of Ituzaingó

BUENOS AIRES, Aug 17 2012 (IPS) - After more than a decade of campaigning against toxic agrochemicals, a group of women from a poor neighbourhood in the northern Argentine city of Córdoba have brought large-scale soybean growers to trial for the health damages caused by spraying.

The trial began in June, and the sentence is to be handed down on Aug. 21. In the dock are two soybean producers, Francisco Parra and Jorge Gabrielli, and the pilot of a spray plane, Edgardo Pancello.

The prosecutors are seeking four years of prison for Parra and three years for Pancillo. But the prosecutor’s office has not filed charges agaimst Gabrielli, due to the lack of clear evidence of his responsibility, and he is expected to be acquitted.

The court must decide whether there is enough evidence to link the spraying of agrochemicals with harmful health effects, and sentence accordingly.

“We are not satisfied with the sentences sought by the prosecutor. They have done so much damage to us, and we were hoping for more. But at least it will set a precedent in the country,” one of the plaintiffs, Sofía Gatica, told IPS.

Gatica won the prestigious Goldman Environmental Prize this year for her activity in defence of the environment and the lives of people in her working-class neighbourhood, Ituzaingó Anexo, on the outskirts of Córdoba.

For years, the 5,000 people of Ituzaingó Anexo suffered the impacts of spraying on the commercial soybean fields surrounding the neighbourhood. Many homes are just metres away from the crops.

In 1999, Gatica’s daughter died of kidney failure three days after her birth. The mother’s grief turned into anger, and she started to keep track of the cases of cancer, birth defects and other health problems in the neighbourhood.

She suspected that the numerous health problems were caused by glyphosate, the herbicide used on fields of genetically modified soybeans, sprayed by hand or from planes.

Gatica’s list included cases of newborns with six fingers or without a thumb, with deformed jaw bones, or without intestines. “We had malformations, cancer, lupus, purpura, haemolytic anaemia,” she said.

The Mothers of Ituzaingó, the name of the group of women who began to draw attention to the suspected link between the herbicide and the health problems in their community, had blood samples from local children tested, and carried out tests of the water, air and soil.

The results of the testing pointed to a link between exposure to glyphosate and health problems.

The women discovered that the cancer rate in the community was 41 times the national average. Rates of respiratory diseases, neurological problems, and infant mortality were also far higher than average.

As a result of their activism, they won a municipal ordinance banning spraying by hand within 500 metres of the neighbourhood, and aerial spraying within 2,500 metres, which created a buffer zone around the community.

But aerial spraying continued, and in 2008, the Mothers of Ituzaingó brought legal action against the commercial soybean growers, providing as evidence videos showing spray planes flying close to the community.

The lawsuit was backed by the under-secretariat of health in the city of Córdoba, which also filed its own case. The prosecutor’s office ordered an investigation, which found that not only glyphosate, but endosulfan – a controversial insecticide that is being phased out globally – were sprayed in the area.

After the lawsuits were brought and “stop the spraying” protests were held by rural organisations, environmental groups and community associations campaigning against the use of agrochemicals in virtually every province, the national government decided to intervene.

In 2009, President Cristina Fernández decreed the creation of a national commission to investigate agrochemicals, under the Health Ministry.

Shortly after the commission was set up, the experts issued a report, the “Evaluación de la Información Científica vinculada al Glifosato en su Incidencia sobre la Salud y el Ambiente” (evaluation of scientific information on glyphosate’s impact on health and the environment), which assessed the studies carried out on the issue, but did not provide conclusive results of its own.

“Because there is not enough data in Argentina on the effects of glyphosate on human health, it is important to promote further research,” was the report’s final recommendation.

That year, Dr. Andrés Carrasco, a professor at the Molecular Embryology Laboratory of the University of Buenos Aires School of Medicine, also demonstrated damage caused by glyphosate in amphibian embryos.

According to his study, published in the magazine Chemical Research in Toxicology in 2010, the herbicide was extremely toxic for amphibian embryos, even in doses much lower than those used in agricultural spraying.

“The results found in laboratories are compatible with birth defects observed in human beings exposed to glyphosate during pregnancy,” added Carrasco, one of the expert witnesses summoned by the plaintiffs in the trial.

Agronomist Javier Souza, another witness for the plaintiffs, told IPS that the trial “is a very interesting case because it will set a precedent in a province where one-third of the soy grown in the country is produced.”

Argentina is the world’s third-largest soybean exporter. In the last growing season, nearly 19 million hectares of soybean were planted, and some 50 million tonnes were harvested.

According to Souza, coordinator of Pesticide Action Network – Latin America, the judges as well as the prosecutor have shown an interest in “gaining an in-depth understanding” of the health effects of agrochemicals.

“The problem is that not all live organisms react the same; there can also be long-term effects. For that reason, in my testimony I insisted that a cause-effect relationship should not be sought, because it is not going to be found.”

Souza advocates the precautionary principle, which states that, even if a cause-effect relationship has not been fully established scientifically, precautionary measures should be taken if the product or activity poses a threat to health or the environment.

In the trial, the expert was also asked to describe organic alternatives to monoculture production that is increasingly dependent on chemicals.