WASHINGTON, Aug 22 2012 (IPS) - Intervention in Syria was “only a matter of time”, wrote Emile Nakhleh in February in the Financial Times. Seven months later, the fighting and divisions within Syria continue to worsen. Now, a diplomatic solution is no longer possible, Nakhleh, a retired CIA analyst, believes.

At the CIA, Nakhleh was a senior analyst and director of the Political Islam Strategic Analysis Program and of regional analysis in the Middle East. During that time, he and his analysts briefed policymakers on how Bashar al-Assad used repression to maintain stability. Since retiring from the U.S. government in 2006, Nakhleh has served as a consultant to the government on national security issues, particularly Islamic radicalisation, terrorism, and Arab states. 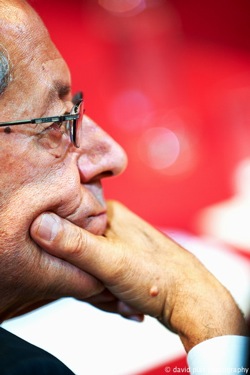 An estimated 8,000 to 20,000 people have been killed and tens of thousands of Syrians have fled their homes into neighboring countries. The Obama administration has shown reluctance to become directly involved in the conflict.

IPS correspondent Jasmin Ramsey spoke with Nakhleh about the conflict in Syria and his belief that the longer the West waits to assist the rebels, with NATO and Turkey leading, the bloodier the conflict will become.

Experts from the interview follow, and the complete interview can be found here.

Q: What is your current assessment of the situation in Syria?

A: I wrote an article about Syria in the Financial Times in February and some of the things I wrote about then are happening now. Namely, there’s more talk about a security zone. The regime is basically fraying and is going to fall. The question is how it’s going to fall and what kind of chaos and instability will follow.

I’m not that concerned about these fears of instability and Islamic extremist groups. These fears are being pushed by the regime to scare people. The regime is saying, “We are providing security and stability and the alternative is insecurity and instability.” There are some Jihadist and Al Qaeda elements, but the fact is that those were also in Libya and some of them were in Tunisia.

Q: Why, then, is the United States saying that one of the reasons it’s not directly supporting the rebels is because it’s unsure who they are?

A: That is a legitimate excuse. In fact, that argument was one of the reasons that delayed our recognition of even the Libyan rebels in Benghazi and our action there. It was the same argument in Egypt. We kept hearing the word “leaderless”. Well, they are leaderless, we don’t know what leaders to deal with, and therefore we delay action.

But I suggest that assistance now from the U.S. and its NATO allies, especially Turkey, are crucial. I’m not saying necessarily direct military participation, but I consider the Syrian regime, as one Syrian expert recently said, a mafia. There’s no negotiating with them. They’re going to go down fighting and in the process destroying Syria and killing so many more.

Q: So what should support to the rebels look like?

A: The regime is strong in the air and tanks, so the rebels – through Turkey perhaps – need rocket-propelled grenades against tanks and stinger missiles against planes. They need to even the playing field in those two areas. The rebels also need ammunition.

We could recognise a geographic area, something like a safe haven contiguous to Turkey. Once we recognise that, then through Turkey we can send humanitarian assistance, medical aid, and other logistical assistance. I say Turkey because then we can go around the Security Council by saying that this is a NATO thing. We are members of NATO and so is Turkey, which could argue it feels threatened by the growing insecurity on its border.

Turkey can act, but we should also be wary a bit of Saudi and Qatari support.

A: Yes, but I’m not going to speak for anyone. But that’s why Turkey initially went to NATO as well and I think NATO’s role can be increased. I don’t mean flying there or doing a no-fly zone and protecting the people through NATO planes as they did in Libya.

What they can do is arm the opposition with anti-aircraft and anti-tank weapons and the opposition can do the job. That’s an important distinction – it also will keep the Western and NATO powers more free to act.

Q: Is a diplomatic resolution no longer possible?

A: That time has passed because the regime is not interested in negotiating with the opposition.

If you listen to their propaganda, the opposition is labeled as foreign terrorists, and yet, what about these thousands of people that have been killed? Most of them are Syrians, they’re not foreigners. Those who are still talking about diplomacy are using it as a delay tactic while providing their own form of assistance. But now it’s time to fully assist the rebels without necessarily putting boots on the ground.

Q: But just to be clear, what should the U.S.’s role be in all this?

A: Encouragement and logistical and communications support. According to media reports, the U.S. already has contacts with the opposition and is perhaps already providing covert support in the areas of control, command, intelligence, and communications.

But I don’t expect the U.S., as we are heading toward the presidential election, to play a major open military role in Syria. Necessary weapons could be provided by Turkey, with NATO’s approval, to help the opposition save their own towns and save lives.

I was never really in favour of direct and massive military action in Syria. I have argued elsewhere that military action should develop gradually. The opposition already controls a safe zone and other geographic areas in rural and urban Syria.

When I wrote the FT column, there were no geographic areas that were under the control of the opposition. Now there are areas that the regime does not control – take the statement made by the prime minister who recently defected, speaking in Jordan, who said the regime now controls 30 percent.

That’s difficult to verify, but most observers agree that there are areas that the regime doesn’t control, next to Turkey, and elsewhere. If that’s true, the opposition obviously controls these areas. So then we can recognise that territory, deal with the opposition that’s there on the ground—civilian and military leadership.

We can engage Syrian politicians in Turkey or somewhere else and the Syrian National Council, and then start providing needed support—humanitarian, medical, food, fuel, munitions, et cetera, in order for the Syrian opposition to be able to defend its own people.