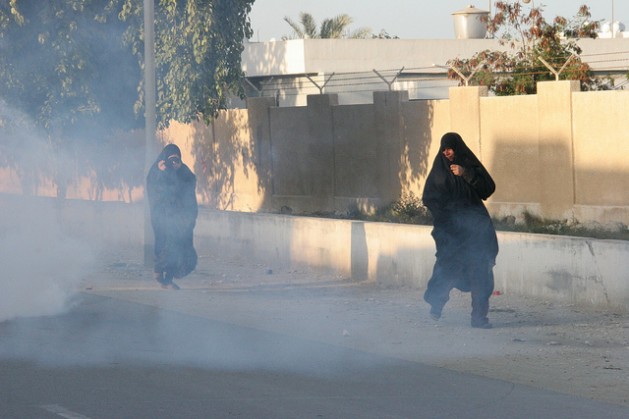 WASHINGTON, Aug 17 2012 (IPS) - The U.S. State Department released a statement Friday urging the Bahraini government to reconsider a ruling that sentenced the director of the Bahrain Center for Human Rights, Nabeel Rajab, to a three-year jail term for organising opposition rallies.

“We are deeply concerned that a Bahraini court sentenced Nabeel Rajab to three years in prison on charges of leading ‘illegal gatherings’. We expect that the verdict and sentence will be reconsidered in the appeals process without delay. We urge the government of Bahrain to consider all available options to resolve this case,” it said.

Mariwan Hama-Saeed of Human Rights Watch welcomed the statement but told IPS that it was “long overdue”.

“The U.S. should have spoken up much earlier, and still should be putting pressure on the Bahraini government to release all peaceful protestors,” he said.

He cited the first line as especially problematic: “The Government of Bahrain has committed to respect freedom of expression and assembly and we look to it to fulfill these commitments.”

Rajab, who had already been serving a three-month sentence for tweeting about the unpopularity of the Bahraini prime minister, was sentenced to three years in a verdict that defence lawyers Jalila Al-Sayed and Mohamed al-Jishi claim was handed out by the judge before they could make it to court. Rajab was taken to prison before he could meet with his lawyers, or his family.

Rajab, who has more than 150,000 followers on Twitter, has been at the heart of protests since February 2011 calling for a more representative government in Bahrain. He spoke vociferously against inequities based on ethnic lines. Bahrain is ruled by the Sunni Al-Khalifa royal family, but has a Shia majority. More than 75 percent of the population is Shia.

Reporters without Borders also ranked Bahrain 173rd in its freedom of speech index. Since February 2011, bloggers, journalists and human rights activists have been arrested and thrown into jail on trumped up charges of “inciting hatred”, “promoting sectarianism”, “disseminating false news” and “calling for the regime’s overthrow in online forums”.

Last year, a military court sentenced 21 human rights activists to lengthy terms in prison. Amidst this chaos, Rajab is on the front lines.

“All Rajab did was exercise his right to assemble peacefully. The Bahraini courts have produced no evidence that proves that Rajab was inciting violence or hatred. This is a terrible ruling,” said Hama-Saeed.

Human rights group the world over urged the U.S. to speak out against the verdict. Human Rights Watch released a statement on Aug. 16 stating, “The Obama administration should raise Rajab’s case forcefully with the Bahraini government.”

“The inabilities of NGOs to register, the numerous arrests, and prison sentences in no way reflect the U.S. government’s statement which calls Bahrain a country that ‘respects freedom of expression and assembly’,” Radsch told IPS.

Radsch, however, recognises the constraints that the U.S. government has in the context of its ties with Bahrain.

“Strategic” is perhaps the best term to describe U.S.-Bahrain relations. The U.S. has a fleet of more than 20 ships based in Bahraini waters. The Fifth Navy Fleet houses more than 2,300 U.S. personnel, and in 2011 approximately 45 million dollars was requested by the Pentagon for an expansion at Shaykh Isa Air Base.

Bahrain buys U.S. weaponry and aircraft worth hundreds of millions of dollars, and the two countries have robust trade relations.

Still, Radsch believes the U.S. can do a lot more to pressure the Bahraini government to halt its brutal crackdown.

“There has been a paucity of attention from the U.S. media and the U.S. government. It’s strange, the Arab Spring is spoken about but people forget that Bahrain is still ongoing, and is still struggling,” she said.

Hama-Saeed is sceptical that the rather tepid statement will have much political impact.

“We appreciate that the U.S. government has spoken up, but we have to wait and see if anything comes of it. A strong condemnation will certainly help,” he said.