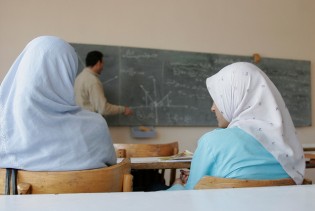 By Aniqa Haider
As the youth population has increased to unprecedented levels in Arab and Asian regions, governments need to do more to invest in them.

By Jim Lobe
Monday’s expulsion order by Bahrain against a visiting senior U.S. official has set back tentative hopes for internal reforms that could reconcile the kingdom’s Sunni-led government with its majority Shia community and drawn a sharp protest from Washington.

By Emile Nakhleh
Bahraini opposition groups announced on Tuesday their opposition to participating in the dialogue that is supposed to start tomorrow. According to the Bahrain Mirror, the five opposition groups that signed the joint statement included al-Wifaq, Wa’d, al-Minbar, al-Tajammu’, and al-Ikha’.

By Emile Nakhleh
The lengthy prison sentences handed down to 50 Shia activists last week and the refusal of Bahraini courts to hear their allegations of torture once again confirm the regime’s continued repression of the opposition.

By Jasmin Ramsey
In May 2011, almost a year and half after a Tunisian street vendor’s self-immolation sparked waves of revolution still rocking the Middle East, Bahraini journalist Nazeeha Saeed was tortured during her 13-hour detention before signing a confession she was not allowed to read.

OP-ED: Why Bahrain’s Al-Khalifa Family Is Losing the Right to Rule

By Emile Nakhleh
By continuing its repressive policies and refusing to engage civil society and moderate political groups in meaningful dialogue for genuine reform, the Khalifa family has squandered its legitimate right to rule Bahrain. King Hamad could still salvage his rule, but he would need to act boldly by taking the following steps.

By Jim Lobe
Human rights groups here are calling for the United States and the European Union (EU) to exert more pressure on Bahrain, home to the U.S. Navy's Fifth Fleet, to seriously engage its opposition and end its repression of its majority Shi'a population.

OP-ED: Ian Henderson and Repression in Bahrain: A Forty-Year Legacy

By Emile Nakhleh
Ian Henderson’s death announcement Apr. 15 in Bahrain brings to an end the life of a British expatriate who was the architect and supervisor of the harsh internal security policies of the al-Khalifa ruling family since the early days of independence over 40 years ago.

OP-ED: Genuine Constitutional Monarchy Is the Only Way Out for Al Khalifa

By Emile Nakhleh
As the Bahraini and international media continue to dissect the meaning of Crown Prince Salman’s appointment as first deputy prime minister, powerful factions within the ruling Al-Khalifa family must be pondering the future of their rule.

By Jim Lobe
On the eve of the second anniversary of the uprising in Bahrain, the administration of President Barack Obama is being urged to press the royal family to make genuine compromises with the predominantly Shi’a opposition.
Next Page »
ADVERTISEMENT ADVERTISEMENT