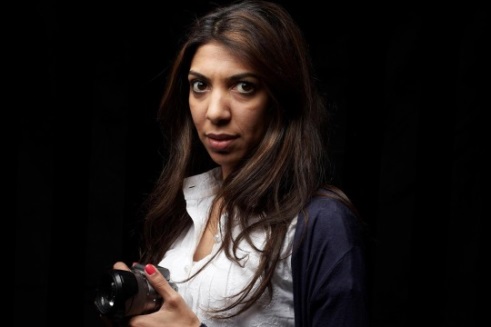 WASHINGTON, Jul 10 2013 (IPS) - In May 2011, almost a year and half after a Tunisian street vendor’s self-immolation sparked waves of revolution still rocking the Middle East, Bahraini journalist Nazeeha Saeed was tortured during her 13-hour detention before signing a confession she was not allowed to read.

Saeed, who had been covering Bahrain’s pro-democracy movement for France 24, was blindfolded, slapped, kicked and beaten with a hose in Riffa police station where she had voluntarily gone for questioning.

She was charged with fabricating news reports, working with Iranian and Lebanese channels and being part of a terrorist cell. A photograph of her covering a protest in the capital, Manama, is the only evidence she’s seen.

Following complaints from France24, Bahrain’s Ministry of the Interior launched an investigation that resulted in the acquittal of one female officer two years later.

Saeed was never tried or sentenced. Lingering psychological trauma prevented her from fully returning to work for six months.

Though King Hamad of Bahrain’s ruling Sunni Al-Khalifa family has urged for reform in the Shia-majority island kingdom, freedom of association and online activism are severely restricted, while charges of torture and unfair trials continue to surface.

More than 60 people have died since protests began in February 2011.

On Jul. 9, Bahraini officials said two attacks in a Shia-majority village left one police officer dead and at least three others injured.

“My country was not violent before Feburary 2011,” Saeed told IPS correspondent Jasmin Ramsey. Excerpts from the interview follow.

A: Since two years ago, it has not been easy for us journalists to work. The freedom we were used to has been reduced. We have to be careful with each and every word we write and say in our coverage. We can be arrested; we can be interrogated just for using certain words.

Q: What happened two years ago?

A: Two years and four months ago the uprising started in Bahrain. People went into the streets inspired by the Arab Spring, asking for more freedom, democracy and accountability. But there was a huge crackdown and maybe that’s why people in Washington and other cities don’t really know what happened.

Maybe they know that at one point people went out to protest in Pearl Square for a month, but since then they may have heard little to nothing because most of the protestors were either arrested, sacked from their jobs or left the country because they felt they were in danger. Some were killed.

Q: Can you describe what happened to you while in police custody?

A male officer met me and said it’s better I tell him everything because it’s useless to lie. He said they had all the videos, phone calls and pictures that prove I’m guilty.

Q: What did they charge you with?

A: There were three charges. Fabricating reports and news, dealing with Iranian and Lebanese channels that I have never worked with, and they accused me of being part of a terrorist cell – its media element.
I said where did you get this from if I didn’t do these things?

He said I should stop lying.

Then a female officer came into the room and began punching me on my face and pulling me from my hair. “Don’t lie, don’t lie, you are a liar.” “You are a Safawi” — a term used in Bahrain to insult Shia and accuse them of being loyal to Iran.

Then another policewoman came into the room, pulled me from my hair and threw me onto the floor. All of them started to kick me, punch me and step on me. This happened in an office with a desk and computer in it.

They made fun of the way I looked and dressed. One woman put a shoe in my mouth and said it was cleaner than my tongue. She said she was so happy to see me like this. I had that shoe in my mouth for 30 minutes.

They took me to another room with other female detainees. I could only hear their voices. Every time they moved me from room to room they pulled me by my hair, so hard that it was bruised for days afterwards. They told me to face the wall and put my hands up. After 30 minutes they came in again and began beating me from all sides with a hose. They go in and out of the room and since you’re blindfolded, you can only wonder who will be beat next.

Then it got more professional. They shocked me with electronic Tasers. Every time I got shocked, they all burst into laugher. Then they took me out of the room, put me on a chair lying on my stomach and beat me on my back, head, legs and the heels of my feet with a hose. They accused me of working with an Iranian TV station and I kept saying no. They said I lied in my reports about people being killed by the army.

During one of the sessions a female officer tried to force me to drink from a bottle. I was blindfolded and she wouldn’t tell me if it was urine so I pushed it away with my hand. She poured it on my face in anger (it left an allergic reaction). She also pulled me by my hair and forced my head into a toilet.

I was there for 13 hours before being allowed to leave.

A: I don’t know. I wasn’t allowed to read the document. I was just shown the place where I was supposed to sign.

Q: Bahrain’s government argues the protest movement has been incited by Iran. You interviewed many of the protestors. What is your take?

A: Such a thing never came up Pearl Roundabout. I never saw an Iranian influence. I can’t speak on behalf of all the protestors. Maybe some of them are allied with Iran. I’m not sure. But the protestor’s demands are obvious. Some said they wanted to overthrow the regime, but that’s an example of freedom of speech. The protestors were demanding freedom, democracy, accountability and the end of corruption.

During my arrest they identified me as Shia. All the time they were accusing me of being allied with Iran. They said I supported Velayat-e faqih [a Shiite principle that gives supreme power to a religious figure and was implemented in Iran after its 1979 revolution] but I didn’t even know what that meant at the time. They accused me of many things I didn’t know the meaning of.

Q: What can Washington do to support the movement for democracy and human rights in Bahrain?

A: I need support from any human being in this world. This is my story and I didn’t get justice. All governments, be they American, British or any other, should influence my government to implement fair trials and to stop harassing journalists.