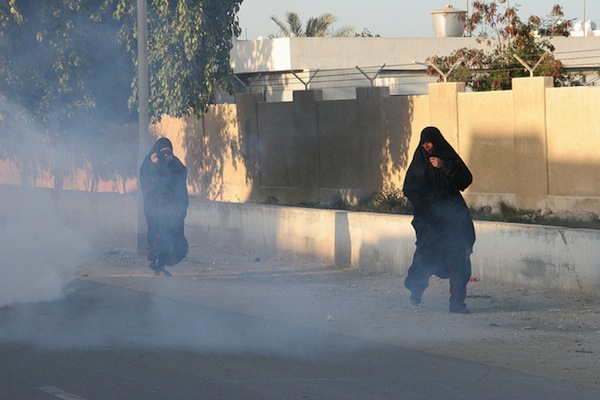 WASHINGTON, Jun 20 2013 (IPS) - Human rights groups here are calling for the United States and the European Union (EU) to exert more pressure on Bahrain, home to the U.S. Navy’s Fifth Fleet, to seriously engage its opposition and end its repression of its majority Shi’a population.

“Bahrain claims to be on a path of political reform, but it is heading altogether in the wrong direction,” according to Joe Stork, deputy Middle East director at Human Rights Watch (HRW), which issued an 87-page report Thursday on how the kingdom is cracking down harder on independent civil society organisations (CSOs).

“The new draft law on association – just like the continued imprisonment of opposition activists – shows all too clearly how the ruling family is rolling back genuine reform on so many fronts,” he added.

"Bahrain claims to be on a path of political reform, but it is heading altogether in the wrong direction."
-- Joe Stork

Brian Dooley, a specialist in the Gulf states for Human Rights First (HRF), said that the Obama administration “is realising, if belatedly, that it’s been had” by Bahrain’s promises of reform. “It needs to figure out what to do instead.”

“There’s been a slow, but unmistakable increase in repression. The current situation can’t go on year after year, because there’s a real danger it will explode into something much worse,” he said.

The new HRW report, as well renewed appeals for Washington to take a tougher stance, comes ten days before EU High Commissioner and several EU commissioners are to meet their Gulf Cooperation Council counterparts in Bahrain.

“They should convey beforehand their expectation that key political prisoners will be released in advance of the summit,” said Stork.

The crown prince has been Washington’s favourite in the ruling al-Khalifa family due to the perception that he favours at least limited democratic reform that would give the Shi’a community, which makes up about 70 percent of the island-state’s population, some share of power. The al-Khalifas, who have ruled Bahrain for more than two centuries, are Sunni Muslims.

In a bid to increase the crown prince’s leverage back home, the administration announced during his previous visit here 13 months ago that it would deliver some weapons from a previously agreed 53-million-dollar arms package. The package was held up by lawmakers in Congress concerned about human rights abuses committed during Bahraini security forces’ fierce, Saudi-backed crackdown on opposition during the 2011 “Arab Spring”.

The crown prince, however, has failed to deliver. Despite the February launch of a much-heralded national dialogue, repression has actually increased, according to human rights monitors and independent analysts, who noted that no new arms announcements were made during this year’s visit, during which Obama nonetheless reiterated his support for “advancing reform” and the dialogue process.

“The national dialogue has essentially frozen,” noted Toby Jones, a Gulf expert at Rutgers University in New Jersey. “It’s accomplished exactly what the royal family had hoped it would; that is, to basically paralyse the political process in Bahrain.”

“Washington had hoped that the crown prince and Al-Wefaq, the mainstream Shiite opposition party, could reach some negotiated compromise, but the crown prince is not as powerful as the U.S. would [like] him to be,” Jones explained.

“His rivals have used this kind of public politics as a way to give the appearance of accomplishing something without really accomplishing anything at all.”

The situation actually appears to have deteriorated, said rights advocates here, several of whom, including Dooley and the U.N.’s Special Rapporteur on torture, Juan Mendez, were given visas to Bahrain this spring only to have them cancelled at the last minute.

Since February, when HRW researchers visited the country to compile information for its new report, “‘Interfere, Restrict, Control’: Restraints on Freedom of Association in Bahrain”, the group has been denied visas to return.

“New laws and lengthy jail terms for activists have put freedom of association in Bahrain under severe threat,” HRW said Thursday, pointing to a draft bill that would be even more restrictive than current law, which bans CSOs from engaging in politics. “Bahraini authorities have left hardly any space for peaceful political dissent.”

“We’re seeing an uptick in the last month of people being pulled from their houses at night by masked men without warrants, similar to what happened [during the repression of] 2011, though not on the same scale,” Dooley told IPS. He also pointed to more “reports of torture in custody” and “a clampdown on social media”.

“No senior officials have been prosecuted for torture or extra-judicial killing. Judicial harassment of dissidents has continued, as has the excessive use of force by police, plus the problem of increasingly violent protests…with no light at the end of the tunnel,” he continued.

The Obama administration, according to Dooley, is deeply frustrated by the situation and increasingly impatient with the Khalifas to follow through with promises for reform. He noted that recent official U.S. government reports on human rights, religious freedom and labour rights in Bahrain have been noticeably more critical than in the two previous years.

In 2011 and 2012, no one in Washington considered moving the Fifth Fleet out of Bahrain, Dooley said. “But there’s now much more open discussion about it in two ways – that the level of repression may reach such a pitch that’s it’s just too embarrassing to have the fleet there and that the political situation is becoming so unstable and volatile that it’s just too risky for the fleet to remain.”

Jones, however, was more doubtful, particularly given rising regional tensions around Iran’s nuclear programme and strong Saudi pressure to support the monarchy.

“Washington continues to see Bahrain not as a place with complicated politics, but as a strategic asset.…If it had to choose a menu of options, it would choose the Al-Khalifas and a more or less stable Bahrain over a political system in which the opposition has more say,” he told IPS.

“Except for the crown prince, the other major players in the royal family don’t believe American pressure is real, and it’s not as evidenced by the continued sale of military hardware.” Indeed, in its proposed 2014 foreign aid budget, the administration asked for 10 million dollars in military sales credits, the same as in 2012, and 450,000 dollars in security training programmes for the Ministry of the Interior (MOI), which is in charge of the police.

In defending the latter, the State Department said the training would “contribute to counterterrorism and investigative support”.

As explosive devices from opposition protesters grow in sophistication, “the MOI needs training to better counter and prevent terrorist activities,” it said, and all training “will underscore the importance of adherence to international human rights standards while confronting serious threats”.