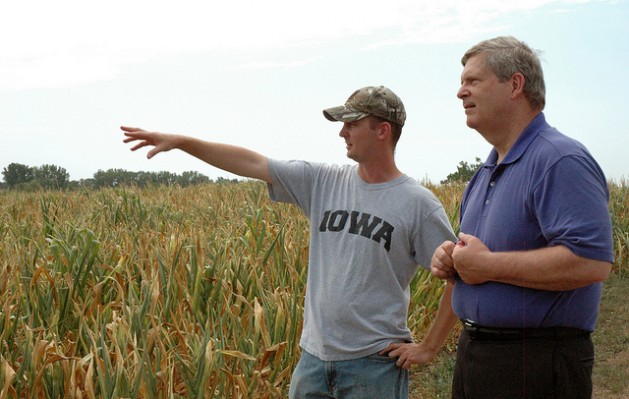 NEW YORK, Aug 11 2012 (IPS) - The historic drought withering much of the United States this summer has revealed a need for strategies to better manage water supplies that could remain under severe pressure both this year and in the longer term.

On Friday, the U.S. Agriculture Department said that corn yields – which account for nearly 40 percent of the global harvest – would be 17 percent lower than expected, contributing to an overall rise in food prices of three to four percent next year.

Van Ayers, an agriculture and rural development specialist with the University of Missouri Extension in Bloomfield, predicts a continued expansion of irrigation systems.

“When I first moved to southeast Missouri over 20 years ago, there were approximately 300,000 acres with irrigation,” he told IPS. “Now there is over one million. This trend will not change.”

The main problem this year is that farmers in southeast Missouri had to irrigate more land than they expected, and some of the systems failed.

“I don’t think anybody expected a drought this severe throughout the growing season,” said Ayers.

According to a July report from the National Climatic Data Center, 33 percent of the country was classified as experiencing a moderate to extreme drought and 55 percent fell in the category of moderate to extreme. The high plains, the midwest and the south are the areas most affected.

July 2012 was the hottest month on record for the U.S., with the average temperature at 77.6 degrees F, 3.3 degrees above the 20th century average.

On Aug. 2, the U.S. House of Representatives passed a 383-million-dollar emergency drought aid package for livestock producers and farmers. The Agricultural Disaster Assistance Act of 2012 will extend expired programmes such as the Emergency Livestock Assistance Program to help farmers to deal with the current drought.

States are also taking action. In Missouri, Governor Jay Nixon established an emergency cost-share programme to provide water for farmers and livestock producers. Some 3,712 applications have been approved, which equals 18.7 million dollars in assistance.

But emergency relief is just a bandaid on the much bigger problem of changing climate patterns and extreme weather events that will continue to impact water supplies for the foreseeable future, environmentalists say.

Gerrit Jöbsis, southeast regional director of American Rivers, calls it the “hydro-illogical cycle” – a “jargon to convey that we are illogical in our approach to managing water supply shortages.”

The cycle consists of panicking when there is a drought, failing to address the shortages with preventive measures for the future and then, once it rains, returning to the previous mismanagement of supplies until the next drought.

“This illogical approach is a cycle of ineffectiveness that we need to end,” Jöbsis told IPS.

For the southeast region, American Rivers says water efficiency is the solution.

“In the southeast of the United States, we have a long history of taking for granted the amount of water that we have,” Jöbsis said. But in the last 40 years, cities have extended their boundaries and the population has increased, putting added pressure on water supplies.

The metropolitan area of Atlanta, Georgia is dealing with precisely these challenges.

“We generally oppose the construction of more reservoirs for water supply until communities have maximised their existing supplies through water efficiency and other means first,” Ben Emanuel, southeast associate director of water supply of American Rivers, told IPS.

The area has nearly four million residents and consumes 652 million gallons of water per day. American Rivers estimates that through water efficiency measures, Metro Atlanta would save 300 million to 700 million dollars, and there would be no need to build new dams.

Ayers also believes that in the mid-south, another area hit by drought, there is a need to efficiently manage the supply of water. Ayers’ focus is primarily on irrigation, and “the efficient use of these irrigation systems is paramount,” he told IPS.

But even in areas where the drought is not as severe, there is a need to better manage water supplies. In Washington state, a clear example of this is the Yakima basin.

Negotiations among stakeholders started back in 2009 and now environmentalists, farmers, the Yakima native nation, and state and federal governments have reached general agreement on an integrated plan.

But the plan also has other elements that need to be implemented in order to meet its goals, such as better groundwater management and renovation of existing dams.

The common thread in all these measures is simple, conservationists say: you may not be able to predict a drought, but you can be prepared when it comes.