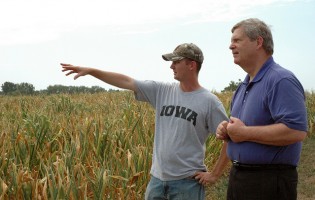 By Carlota Cortes
The historic drought withering much of the United States this summer has revealed a need for strategies to better manage water supplies that could remain under severe pressure both this year and in the longer term.

By Carlota Cortes
Roasted foie gras fillet, with fresh chestnuts and soymilk skin. This dish from Mugaritz, considered the third-best restaurant in the world, sounds exotic. But how this "delicacy" - foie gras means "fat liver" - is produced and at what cost have been unmasked in an investigation led by Animal Equality.

By Carlota Cortes
Each year, 16 million girls aged 15-19 give birth. 50,000 of them die from complications related to pregnancy and childbirth. And 95 percent of those births occur in developing countries.

By Carlota Cortes
An investigation by the Conflict Awareness Project has exposed an active arms trading network of associates of former trafficker Viktor Bout that involves companies from the United States, South Africa and the United Kingdom, among other countries.

By Carlota Cortes
An annual report card on the ambitious U.N.-led initiative known as the Millennium Development Goals (MDGs) says that in three areas - poverty, slums and water – the goals have been met ahead of the 2015 deadline, but persistent gaps remain, notably in the critical area of maternal health.

By Carlota Cortes
Radhika Coomaraswamy has been the United Nations Special Representative for Children and Armed Conflict since April 2006.