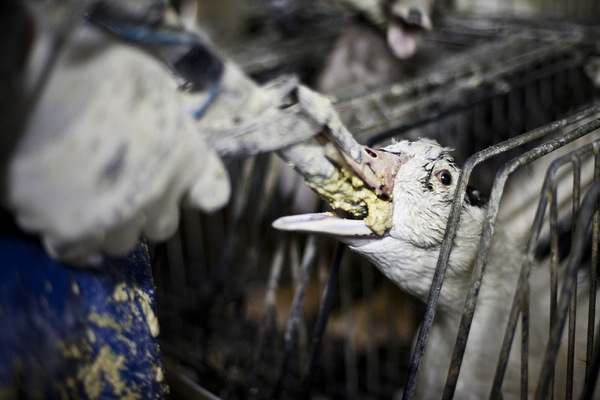 NEW YORK, Aug 2 2012 (IPS) - Roasted foie gras fillet, with fresh chestnuts and soymilk skin. This dish from Mugaritz, considered the third-best restaurant in the world, sounds exotic. But how this “delicacy” – foie gras means “fat liver” – is produced and at what cost have been unmasked in an investigation led by Animal Equality.

The organisation exposed the internal management of multiple foie gras farms – six in Spain and four in France. In the undercover study, which began in July 2011, activists shot footage and photographs and conducted interviews by pretending to be interested in the industry.

“They want to hide what they do, because foie gras implies so much suffering to animals,” Sharon Núñez, general coordinator of the organisation, told IPS. All the footage was acquired legally because they did not use hidden cameras.

The Committee of the European Convention for the Protection of Animals Kept for Farming Purposes established recommendations concerning the welfare of ducks and geese. Adopted in 1999 by the Council of Europe, these guidelines’ key points concerned the health and behaviour of ducks and geese.

Article 7 of the document states: “At the inspection it must be borne in mind that the healthy bird has sounds and activity appropriate to its age” including “clear bright eyes, good posture, vigorous movements if unduly disturbed…good plumage…effective walking, bathing and preening, and active feeding and drinking behaviour.”

Article 10 requires that housing system allow the animals to “flap the wings, turn around without difficulty and stand up in a normal posture”.

But as one of the videos from Animal Equality shows, the animals do not exhibit what is considered appropriate behaviour. Some of them drop their heads in water containers and are unable to move, sometimes due to their weight and at other times because of individual cages.

A European Commission spokesperson, Frederic Vincent, told IPS that according to the recommendations, “until new scientific evidence on alternative methods and their welfare aspects is available, the production of foie gras shall be carried out only where it is current practice and then only in accordance with standards laid down in domestic law”.

But since foie gras farms are apparently not following these recommendations, in January, the European Commission adopted a new strategy where effective implementation is a high priority.

“The recommendations explicitly acknowledge the legality of the production of foie gras as such and only put countries allowing foie gras production under certain obligations,” said Vincent.

Today, only five countries produce foie gras: France, Spain, Bulgaria, Hungary and Belgium. France, the biggest manufacturer, produced around 20,000 tons of foie gras in 2011, according to the report by the ministry of agriculture.

Foie gras in the United States

In the United States, the debate reached the U.S. Department of Agriculture in early July, when the Animal Legal Defence Fund filed a lawsuit.  The key point of the group’s argument is that in order to get foie gras, ducks and geese are force-fed in order to enlarge their livers up to ten times their normal size.

“They are literally willing to torture the animal just to make them taste better and that’s really barbaric,” said Dillard.

On Jul. 1, the state of California banned force-feeding. As a result, foie gras may no longer be consumed, produced, or sold there. Since the closing of Sonoma Farm in California, only two foie gras farms remain in the United States. Both are in the state of New York – La Belle Farm and Hudson Valley Foie Gras.

The organisation Humane Society has been very active in this debate. Paul Shapiro, the group’s vice president for farm animal protection, told IPS that ” cutting off the California market for this cruel and inhumane product is an important move forward for the humane movement”.

The more Americans learn about “how abusive and inhumane…force-feeding is,” Shapiro added, “the more horrified they would be.”

The Humane Society, however, has also intervened in this lawsuit. They are working primarily to keep the California ban in force, said Shapiro. On July 18, the judge ruled that the law would remain in force during course of the case.

The latest development in this debate is the amendment introduced by Congressman Steve King (R-IA), to the 2012 farm bill, which will prevent states from imposing their own standards on agricultural products imported from other states. This amendment will affect directly to the foie gras ban.

“California has no right constitutionally to tell a New York farmer or an Iowa farmer that they can’t sell their product, legally produced under federal regulations, in the state of California,” said Henley.

While organisations like Artisan Farmers Alliance or Hudson Valley Foie Gras are trying to fight bans on the consumption of foie gras, maintaining that force-feeding is not a practice that causes animals to suffer, Humane Society and Animal Legal Defence Fund are focusing on the law’s effective implementation, emphasising the cruelty of the activity.

The debate is ongoing. Indeed, foie gras production is not going to stop soon, as there is some evidence of an emergent black market in California. For others, this product has an expiration date.

“I think 50 years from now people will be horrified that we ever did this,” Dillard said.