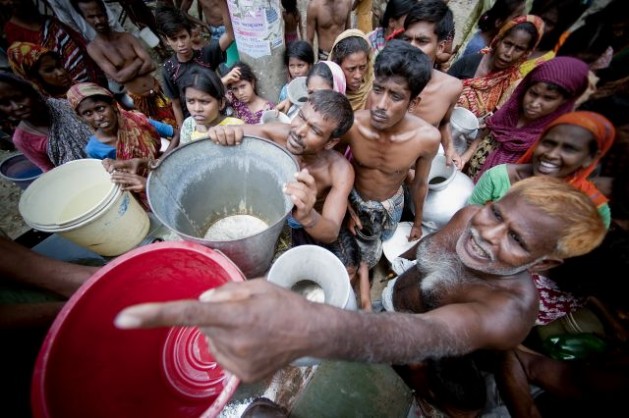 The proportion of people using improved water sources rose from 76 per cent in 1990 to 89 per cent in 2010. Credit: UN Photo/Kibae Park

UNITED NATIONS, Jul 2 2012 (IPS) - An annual report card on the ambitious U.N.-led initiative known as the Millennium Development Goals (MDGs) says that in three areas – poverty, slums and water – the goals have been met ahead of the 2015 deadline, but persistent gaps remain, notably in the critical area of maternal health.

The report , released Monday, also says that the ongoing financial crisis has undermined progress on many of the goals.

“Some of the biggest challenges are the most difficult ones. It doesn’t mean we should give up,” Jomo Kwame Sundaram, former U.N. assistant secretary general for economic development, told IPS.

Based on data compiled by over 25 U.N. and international agencies, the report presents a complex and sometimes contradictory picture.

The official poverty line, as set by the World Bank, is one dollar a day. This decision was “arbitrary” and “convenient”, he said.

Francesca Perucci, chief of the U.N.’s statistics planning and development section, told IPS, “Some developing countries, because of scarce resources, still face some challenges in ensuring that effective data collection programmes are conducted regularly and rely heavily on surveys sponsored and/or carried out by international organisations.”

Eastern Asia (China and Mongolia) is the region with the highest improvement in average. China had a remarkable progress in reducing poverty. The country had a poverty rate around 60 percent in 1990 and it dropped to 13 in 2008. "China had very fast growth, so even though inequality increased, the growth was so fast that everybody was better off," Sundaram told IPS. However, China increased its emissions of carbon dioxide from three billion metric tonnes in 1990 to 8.3 billion in 2009.

Southeast Asia (Philippines, Vietnam and Malaysia among others) achieved the goal of gender parity in primary, secondary and tertiary education – 99 percent, 104 percent and 107 percent respectively, girls' school enrolment ration in relation to boys' in 2010.

North Africa (Western Sahara, Morocco, Algeria, Tunisia, Libya and Egypt) also performed positively. For example, there was a decrease in the proportion of the urban population living in slums from 20 percent in 2000 to 13 percent in 2012.

Sub-Saharan Africa had a big improvement in maternal mortality, with 850 maternal deaths per 100,000 live births in 1990 to 500 in 2010. However, the results are far from the 2015 target. Moreover, this region continues to have the highest birth rate among adolescents (women between 15 and 19 years old).

Oceania fell by one percent in efforts to provide improved water sources. This region fell from 55 percent in 1990 to 54 percent in 2010 of the proportion of people, moving away from the 78 percent target.

Latin America and the Caribbean halved the proportion of people who earn less that 1.25 dollars a day, meeting the goal before 2015. In 1990, the percentage of people was 12 percent and it fell to six percent in 2008.
The hunger indicator is affected by food prices, among other factors, Perucci noted. “More needs to be done, certainly, to better understand all dimensions of poverty. And income poverty alone does not provide a full picture of deprivations suffered by those who do not have all their basic needs satisfied.”

According to the report, the proportion of people living on less than 1.25 dollars a day fell from 47 percent in 1990 to 24 percent in 2008 (the most recent data available). If this pace continues, by 2015 the global extreme poverty rate would be below 16 percent – one billion people.

Water is another goal with positive results. In 1990, 76 percent of the world’s population had access to safe drinking water. This number grew to 89 percent in 2010. Estimates indicate that by 2015, 92 percent of the global population will be covered, which means that the goal would be fulfilled.

Finally, the target to achieve “a significant improvement in the lives of at least 100 million slum dwellers” had improvement but with mixed results. According to the report, the share of urban slum residents declined from 39 percent in 2000 to 33 percent in 2012, which means that more than 200 million people gained access to improved water sources, sanitation facilities and better housing.

Nevertheless, even if the percentage of population living in those conditions has decreased, the absolute number of slum dwellers continued to grow, due mainly to intense urbanisation. It is estimated that right now, 863 million people are living in slums, a considerable increase compared to the 760 million in 2000.

“Even where the targets will be met by 2015, the job will not be done,” said Perucci. “The MDGs have proven to be an important framework for development and will be the basis on which to build the agenda for the post-2015 era.”

Progress for some of the goals is slow, revealing a more profound challenge. Maternal health, for example, is the goal with the least improvement. Reducing maternal deaths and advancing reproductive health requires different interventions, including transportation to hospitals, access to skilled health professionals and a minimum of four visits for antenatal care (recommended by the World Health Organization.)

“There has been visible progress in the provision of some reproductive health services, although not as rapid as in other MDG areas,” said Perucci.

Every goal has different targets, for a total of 21 targets measured by 60 indicators.

“Some of the targets were not very ambitious, but quite modest,” Sundaram told IPS.

A key issue is data availability and accurate methodology. “We need to understand what is being reported, what those numbers mean,” said Sundaram.

But progress does not come only with better data, it also requires international cooperation. “With a continued political commitment, renewed partnership and the necessary funds, progress will continue,” Perucci told IPS.

The next step comes with the MDGs deadline of 2015, and the advent of Sustainable Development Goals (SDGs) as discussed at the Rio+20 summit in June.

“We must not overburden the SDGs,” Sundaram told IPS. “If you have too many targets and indicators, the focus would be gone.”