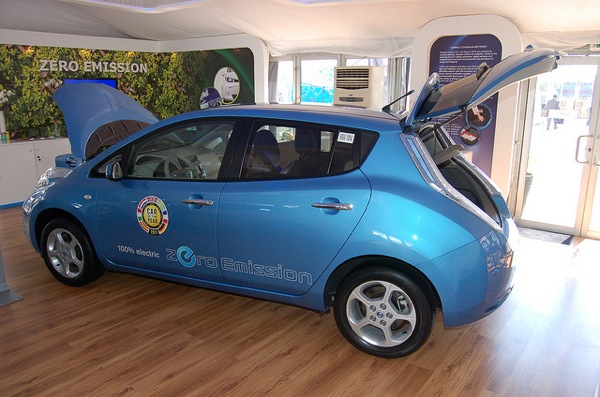 ATLANTA, Aug 29 2012 (IPS) - A 120-million-dollar grant from the U.S. Department of Energy to the nationwide Electric Vehicle (EV) Project aims to promote and expand the use of electric vehicles in the United States.

The grant is part of the American Recovery and Reinvestment Act, the economic stimulus package enacted by President Barack Obama and Congress to invest government dollars in programmes to create jobs, and, among other things, make green investments.

Free smart chargers are available to anybody who purchases a Nissan LEAF or Chevy Volt, the two most common models of electric vehicles, while businesses can host commercial chargers for free.

Proponents of the programme point out that increasing the use of electric vehicles in the United States will reduce U.S. dependence on foreign oil.

However, the electricity still must be produced somehow, and in many cases still, it is done through coal and nuclear power plants.

A recent report by Environment Georgia has found that nevertheless, switching from gasoline-powered cars to electric ones still has benefits in reducing global warming, even in a state such as Georgia, which is far behind other states in moving to renewable energy.

And if the vehicles are powered solely with renewable energy, the report projects that these emissions could be reduced by more than 1.9 million metric tonnes each year.

“There are still (pollution) savings. Obviously you would see greater savings if the grid mix were to change and improve,” Jennette Gayer, executive director of Environment Georgia, told IPS.

“A normal internal combustion vehicle – the cleanest it’s going to be is the day you drive off the lot….The older it gets, the dirtier it gets,” Echols said.

Georgia Power is one of the industry groups that is partnering with Ecotality. The company is offering a reduced energy rate for customers who use most of their energy at night; the rate is designed for customers with electric vehicles who are charging their cars between the hours of 11 pm and 7 am, which are considered extremely off-peak hours.

Utility companies undoubtedly stand to gain by promoting electric vehicles, which, after all, boost demand for electricity. But even though consumers must pay for electricity, the cost must also be compared to the prospect of paying for gasoline instead.

The Environment Georgia report pointed out some of the many costs of relying on oil, recalling the British Petroleum Deepwater Horizon oil spill of 2010 along the Gulf of Mexico. Electric cars have the potential to reduce such costs by shifting the reliance onto renewable energy.

Cleaning up the grid

Yet there are risks. “If you do a huge roll-out of electric vehicles and don’t change the grid, Georgia Power and companies can use it as excuse to push really dirty proposals. But we’re headed as a country overall – not necessarily in Georgia – we’re heading in the right direction,” Gayer said. “There are (Environmental Protection Agency) rules coming down the pike that will continue to push towards cleaning up our grid.”

Electric vehicles are indeed making a comeback. A 2006 documentary, “Who Killed the Electric Car,” shows how the oil and automobile industry conspired to prevent an electric car model, the General Motors EV1, from becoming popular in the mid-1990’s.

By comparison, the success of electric vehicles today is a stark turnabout from nearly twenty years ago, when the EV1 died young. Environment Georgia reported that in 2011, the first year electric vehicles came back on the market in the United States, over 17,000 were purchased.