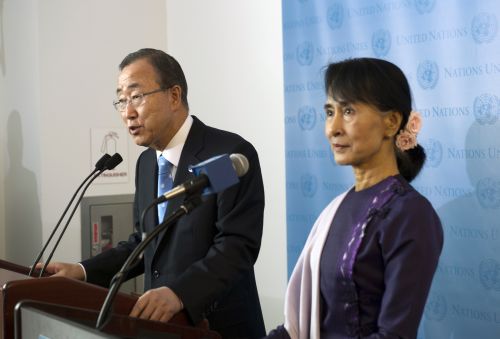 UNITED NATIONS, Sep 21 2012 (IPS) - When world leaders heading politically shaky authoritarian regimes lead their country’s delegations on overseas visits or attend international conferences, including the annual U.N. General Assembly sessions in September, there is always a lingering fear of either an insurrection or an attempted military coup back home.

As far back as 1966, Ghana’s then-president Kwame Nkrumah was ousted from power when he was visiting China. And in March 1970, Prince Norodom Sihanouk of Cambodia was dethroned – immediately after returning from visits to Moscow and Beijing – in a bloodless coup led by Lt. Gen. Lon Nol.

General Idi Amin overthrew the government of Prime Minister Milton Obote of Uganda when he was at the Commonwealth Heads of Government meeting (CHOGM) in Singapore in January 1971.

But the CHOGM political curse did not stop there.

In June 1977, the President of Seychelles James Mancham was deposed in a coup while he was attending the London Commonwealth summit six years later.

And most recently, Thai Prime Minister Thaksin Shinawatra was ousted in a military coup 24 hours before he was to address the General Assembly sessions in September 2006.

Perhaps Thaksin made the supreme mistake, like all others, of leaving his army chief back home. He paid a heavy price for it, and still lives in political exile.

As the weeklong high-level segment of the General Assembly begins next week, a new generation of Arab leaders will be at the United Nations.

But these are heads of state and heads of government who succeeded authoritarian leaders who were ousted by revolts and insurrections during the “Ärab Spring” – in Tunisia, Libya, Egypt and Yemen.

The line-up of Arab leaders expected at the United Nations includes President Moncef Marzouki of Tunisia who took power in December 2011 after Zine El Abdine Ben Ali fled the country; Mohamed Yousef el-Magariaf, president of Libya’s National Congress who took over after Muammar el- Gaddafi was killed in the October 2011 civil war; President Abd Rabbuh Mansur Al-Hadi of Yemen who succeeded Ali Abdullah Saleh who went into exile in February 2012; and President Mohammed Morsi of Egypt who took power from Hosni Mubarak who was ousted in February 2011.

Since all of them assumed power either after popular revolts on insurrections, the chances of these leaders being ousted when in New York seems remote.

At his press conference Wednesday, Secretary-General Ban Ki-moon told reporters he expects 123 heads of state and government – besides deputy prime ministers and foreign ministers – to attend the current 67th session of the General Assembly where the high-level debate is scheduled to begin Tuesday.

Besides the “deteriorating situation” in Syria, he said, the United Nations will be hosting a series of mini-summits and special meetings focusing on the emergency in the Sahel; progress in Somalia (whose new president Hassan Sheikh Mohamud is also due here); the transitions in Myanmar and Yemen; instability in the Democratic Republic of the Congo; and the relations between Sudan and the new neighbouring country of South Sudan.

“We will also discuss the threat of nuclear terrorism and press for the early entry into force of the Comprehensive Nuclear Test-Ban Treaty,” he added.

But Samir Sanbar, a former U.N. assistant secretary-general and a longtime observer of Middle Eastern politics, is sceptical of the “new generation” of Arab leaders.

Asked for his political insight, Sanbar told IPS, “Whatever speeches are made at the General Assembly next week, there are certain facts on the ground.”

First, Arab Women and Youth who spearheaded the dynamic protests two years ago will argue that the so-called Arab Spring has been hijacked through a deal with Islamist movements mediated by two regional sub-contractors (no naming required), he pointed out.

Second, the new generation is new to governance but they are of the old generation; it is therefore the forces behind them that would matter- and they have not shown their hand yet, said Sanbar, who served under five different secretaries-general and is currently editor of an electronic newsletter titled U.N. Forum.

Third, he said, the rulers who had emerged after the Palestinian Nakbah of 1948 were military coup leaders who suppressed freedom ostensibly to liberate Palestine (“the outcome was no liberation and no freedom”).

And the new leaders are already attempting to control freedom, especially of women, the media and creative arts, under the guise of religion, he observed.

“We may end up again loosing freedom and distorting the holy message of religion,” Sanbar said.

Political rhetoric during confused times may tend to conceal more than reveal, he said, pointing out that as recent events show, “more of the same trouble is likely to continue”.

“God help the people – decent, honest dedicated – of that region who always end up paying the price,” declared Sanbar.