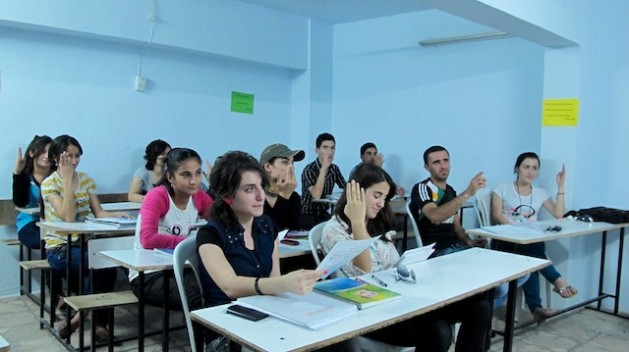 At a Kurdish class in Derik in northeast Syria. Credit: Karlos Zurutuza/IPS.

DERIK, Northern Syria, Sep 10 2012 (IPS) - “I want to learn how to read and write in my own language,” says Manal, a young Kurd from Syria. Neither she nor any of Manal’s 30 classmates have ever been so close to achieving their goal.

And it’s not that Manal doesn’t have an education: the 21-year-old explains in almost perfect English that she hopes to get her degree in economics next year at the university of Hasake, 600 kilometres northeast of Damascus. But until two months ago, she had never had a chance to write in her native Kurdish, banned for the nearly 50 years the Baath party has remained in power in Syria.

During this summer vacation, Manal has attended Kurdish language classes at the Badarhan academy in Derik, 700 kilometres northeast of Damascus. This is one of two language centres in town that have recently included Kurdish in their offers: three one-hour sessions a week, free. The teaching is funded by contributions from private individuals.

“I speak English, so I was already familiar with the Latin alphabet, also used for Kurdish,” Manal explains just before she walks into class.

At the end of the school day, headmaster Mohamed Amin Saadun briefs IPS on the background to this initiative. It’s just two months old in Derik but it has precedents in virtually every Syrian location under Kurdish control. Some opened almost from the very start of the uprising more than a year and a half ago.

“We had taught English and Turkish for years and we were aching to get the opportunity to include Kurdish language lessons, as well as history, poetry and culture of our people,” says Saadun, also a renowned writer and poet.

Mohamed Sadik gave two of his two back rooms to the school for free so that it could accommodate the rush of new students. “A lot of people have died for the Kurdish cause,” says Sadik amid the snap of the metal shutters closing behind him. “What I’ve done is nothing compared to that.”

Following the agreement signed last July between the main Kurdish political parties in Syria in Arbil – the administrative capital of the autonomous Kurdish region of Iraq – educational management in the region is controlled by the Democratic Union Party (PYD), the dominant coalition among the Syrian Kurds. Today, the education committee is working against the clock to include subjects like math and history in the academic year.

With the coming of the Baath Party to power in 1963, the Kurds of Syria – estimated to be between two and four million depending on the source – have been subjected to a systematic policy of Arabisation. But now Badarhan has 600 students learning Kurdish.

Theirs is an Indo-European language of five variants, two of them are dominant: Kurmanji spoken by the Kurds of Turkey and Syria and written in Latin script, and Sorani, used by most Kurds in Iraq and Iran and written in the Arabic alphabet. There is a standard for each of these two variants but still no common language and alphabet for the 40 million Kurds worldwide.

Manal shares her desk with Fatima, a nurse. “It is doubtless important for us, but especially for the future generations,” Fatima says. She recalls she was once expelled from school for a week for speaking Kurdish in class.

“We would speak it in secret, even with some of the teachers.”

Fatima today strives to write correctly in her native Kurmanji thanks to a photocopied grammar book but, above all, to the volunteer teachers such as the young tutor Hoshank.

“When I heard that they needed teachers I did not hesitate for a second,” he says.

“I learned how to write by myself, through the Internet and books I would keep hidden at home. Today I want to make things easier for others and to do something for my people.”

The colonial borders drawn in secret between Britain and France in 1916 over the Baghdad railway line divided the local Kurdish families into Turkey and Syria. The subsequent Treaty of Sevres (1920) considered the creation of an independent Kurdish state but the agreement was never fulfilled.

Since the Internet arrived, Damascus has enforced a severe veto over the main social networks and all sorts of websites the regime considers potentially dangerous. Such blockade has been worsened by the erratic Syrian telephone communications since the beginning of the war.

Most Syrian Kurds, however, benefit from almost barrier-free Internet access thanks to the Turkish network across the border that can be easily accessed. Albeit unintentionally, that would be the Turkish government’s contribution to a cohesion of the Kurdish people amid their cultural revolution.