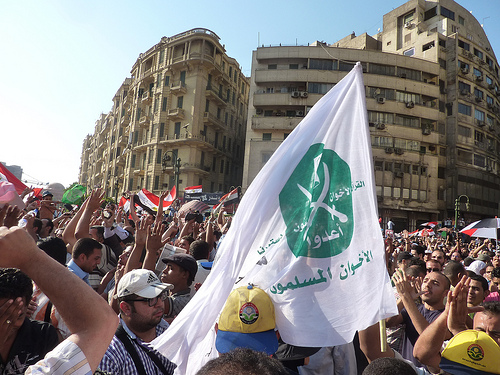 WASHINGTON, Sep 17 2012 (IPS) - While Tuesday’s killing of the U.S. ambassador to Libya and three other U.S. officials in Benghazi dominated the headlines here last week, the larger concern for most foreign policy experts here was focused on neighbouring Egypt and specifically how the government of President Mohamed Morsi was dealing with anti-U.S. protests.

Five days after demonstrators breached the walls of Washington’s Cairo embassy and replaced the U.S. flag with a black banner that some media here identified with Al-Qaeda, it appears that the bilateral relationship has survived the crisis.

As relative calm returned to the Egyptian capital this weekend after three days of protests against a privately produced video that defamed the Prophet Muhammad, U.S. officials voiced measured satisfaction with Morsi’s reaction, however belated.

Tuesday’s attack on the embassy, which may have sparked the fatal assault on the Benghazi consulate, provoked angry calls by some right-wing commentators and lawmakers to immediately cut U.S. aid to Cairo – and block a pending 4.8 billion-dollar-loan by the International Monetary Fund (IMF) to help rescue its floundering economy – to punish Morsi for failing to prevent or, unlike his Libyan counterparts, quickly condemn the violence.

Congress also could vote this week on a one-billion-dollar debt relief package for Egypt.

Critics noted that Morsi initially expressed more sympathy for the protestors’ anger over the video than displeasure at the violation of diplomatic norms.

But their demands were swiftly rejected by the administration of President Barack Obama, even as Obama himself pressed the Egyptian leader privately to take a stronger stand against the attack and defuse rising tensions.

Some influential Republicans also argued that Washington has far too much invested in its relationship with Cairo – including its Muslim Brotherhood-led government at a time when Islamists have been empowered by “Arab Spring” – to cut off ties.

“We need to avoid an undiscriminating Islamophobia and distinguish between those who want to kill Americans and those who may dislike the West but are primarily interested in rebuilding their societies after decades of dictatorship,” wrote Robert Kagan, a leading neo-conservative thinker at the Brookings Institution in the Washington Post Friday in an appeal to others on the right to “tone down their apocalyptic rhetoric”.

Given its population of some 86 million, its historic influence, and strategic location, Egypt has long been regarded by U.S. policy-makers as Washington’s most important partner in the Arab world, along with oil-rich Saudi Arabia.

Since it signed the Camp David Accords with Israel in 1979, Cairo has been Washington’s second biggest aid beneficiary – second only to the Jewish state – receiving an average of more than two billion dollars a year in bilateral assistance since, most of it in the form of military aid.

Through virtually all of that period, Egypt was ruled by former President Hosni Mubarak, a former Air Force general who kept the country firmly in the pro-Western camp, even as he defied sporadic U.S. and European pressure to implement democratic reforms. As popular demands for his ouster mushroomed with the onset of the “Arab Spring” in early 2011, however, Obama administration sided – albeit with considerable trepidation – with the protesters.

At the same time, it reversed decades of official U.S. policy by publicly engaging leaders of the Brotherhood, which had been severely repressed under Mubarak and whose subsequent decisive success at the polls – along with the more-radical Salafist Nour Party – surprised many analysts here who had favoured those more Western-oriented liberals who had led the initial phases of the revolt against Mubarak.

From the outset, the administration’s engagement with the Brotherhood – and most recently its backing of Morsi in a series of face-offs with the U.S.-backed military this summer – has been scorned by many on the right, particularly neo-conservatives concerned about the group’s historic hostility toward Israel and the Camp David Accords, as well as many leaders of the Christian Right who have become unabashed Islamophobes since 9/11.

“…(T)he true face of the misnamed Arab Spring, so enthusiastically supported by Obama is finally undeniable,” wrote Caroline Glick, an Israel-based fellow at the neo-conservative Center for Security Policy (CSP) in The National Review last week about the violence. “The Obama administration has played a central role in overthrowing U.S.-aligned regimes and replacing them with regimes that are hostile to the U.S. and its strategic interests,” according to Glick is also an editor at the Jerusalem Post.

“No one should consider Egypt too big to fail,” wrote Michael Rubin of the neo-conservative American Enterprise Institute (AEI) shortly after the attack on the embassy. “Subsidizing a Muslim Brotherhood government enables the Egyptian leadership to shirk responsibility for its actions and its incitement,” in one of a number of criticisms suggesting that the Brotherhood itself had incited the embassy attack.

Similarly, the normally more moderate Washington Institute for Near East Policy (WINEP), the Israel lobby’s main think tank, called for suspending all aid and debt relief for Cairo and putting a scheduled meeting here between Morsi and Obama later this month on hold until the Egyptian government met certain conditions.

For these critics, the embassy attack was the latest in a series of actions by Morsi – not least his attendance, in defiance of Washington, at the Non-Aligned Summit in Tehran earlier this month – that raises questions about his reliability on Washington’s priority issues.

Obama himself made clear his own disappointment with Morsi’s initial failure to condemn the embassy attack, suggesting in an interview with a Spanish-language network Thursday that his administration considered Egypt neither an “ally” nor an “enemy”, but rather a “work in progress”.

His remarks followed what the New York Times described as a “blunt phone call” by Obama late Wednesday night in which he told Morsi that bilateral aid and relations and would indeed suffer if Cairo failed to protect the embassy and denounce the attackers.

According to the Times account, Obama’s quiet diplomacy paid off, although there were already indications that Morsi – whose experience with balancing popular sentiment and his Islamist constituency with Egypt’s dependence, for now anyway, on Western economic assistance is only just a few months old – was already moving in the desired direction.

On Thursday, Morsi took to the airwaves, insisting that it is a “religious duty to protect our guests and those who come to us from outside the nation” and appealing for protesters to “maintain peaceful ways that the whole world accepts”.

At the same time, Khairat El-Shater, widely acknowledged as the Brotherhood’s leader, expressed condolences for the deaths of the four Americans in Libya and declared the breach of the embassy compound in Cairo “illegal” in a letter published by the Times.

“We hope that the relationships that both Americans and Egyptians worked to build in the past couple of months can sustain the turbulence of this week’s events,” he wrote.

Even the Nour party – the Brotherhood’s right-wing Islamist rival which some analysts blamed for the original attack – condemned the violence, as well as the video that sparked it, and called for future demonstration to take place away from the embassy. It also issued a statement expressing appreciation for the administration’s own denunciation of the video.