Christians Worry Over a Future in Egypt 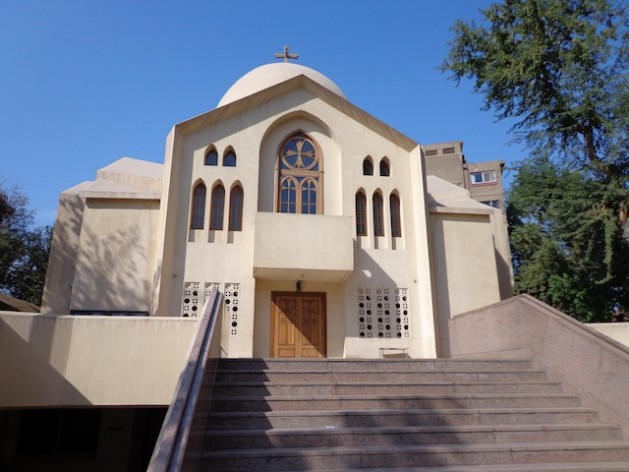 But this bubble of tranquility stands juxtaposed to another reality which threatens other parts of Egypt and undermines the confidence of Coptic Christians in a future for them in their country they love but feel increasingly uncomfortable in.

Maadi is a suburb favoured by wealthy expatriates and educated Muslims and Coptic Christians. “The relationships between Christians and Muslims in Maadi are very cordial.  When I walk in the streets in my clergy clothing I’m greeted and treated with respect by most people,” Father Makarious Morris, who has led St. Marks Coptic church in Maadi for 20 years, tells IPS.

While personal relations between Muslims and Christians in many parts of Egypt are fine, in other areas there are problems which have led to regular outbreaks of violence and death. Copts, who comprise approximately ten percent of the population, often bear the brunt of the inter-religious clashes.

Cairo’s Copts recently commemorated the one-year anniversary of the Maspero massacre, remembering the persons killed by Egyptian security forces last year as they peacefully protested the destruction of an 80-year-old church in upper Egypt by Salafist extremists.

Copts marched on the state’s TV broadcasting centre in central Cairo, known as the Maspero, after the church’s destruction. This followed a refusal by the Christians to remove the church’s steeples or speakers as ordered by the Salafists. The authorities for their part argued that the church had been built without a permit.

“This is just one element of the discrimination which Christians in Egypt face. Before a church can be built, or alterations can be made on an existing one, a permit is required by law. This doesn’t apply to mosques with Muslims free to build them where and when they please to a large degree,” says Morris.

“This has forced us to build churches in a clandestine manner which in itself is insulting. Many have been built without permits and then congregations begin praying in them. By the time the authorities are aware it’s often too late, and unwilling to have a violent confrontation with the international condemnation that would follow they have let it slide,” Morris tells IPS.

“But last year this approach backfired in upper Egypt and the church was destroyed. In the protest march in Cairo that followed the crowd was peaceful until security force members opened fire on the crowd and killed many by running over them with personnel armoured carriers.”

No legal action was taken against military officers involved. Two junior soldiers received jail terms of two and three years for their involvement.

“Another area of discrimination is that no Christian can ever rise high up in any government institution, including the military, irrespective of how much they love their country and how patriotic they are. Senior positions are reserved for Muslims. In the business community it is different and there have been several prominent Christian businessmen who have become very wealthy and developed large business empires,” Morris tells IPS.

“My congregation from a small part of Maadi comprises about 1,500 parishioners. Since the Muslim Brotherhood came into power, eleven of those families are now trying to emigrate. They are worried about the future of their children.

“Arabic is part of the school syllabus. However, about a quarter of Arabic language instruction is based on the Quran as the authorities say that the standard of Arabic in the Quran is of a very high calibre. All children, irrespective of their religion, therefore are taught from the Quran. However, Muslim children don’t learn from the Bible.”

A 33-year-old mother with two young daughters aged 13 and five tells IPS she is considering emigrating. “I’m afraid for their future,” says the woman, not giving her name. “I don’t want them to be treated as second-class citizens as women in Saudi Arabia are treated. I want them to be able to continue to drive, dress up in attractive clothing without having to cover their hair, and to have careers if that is what they choose.”

Her fear of recriminations may be groundless. However, Egypt has become increasingly sensitive to religious criticism as witnessed by the riots outside the U.S. embassy recently after an American video portrayed Islam and Prophet Muhammad in a derogatory way.

“The border between criticism and insult has become increasingly blurred,” says Morris. “We don’t want to become like Pakistan or Afghanistan.”

A young Coptic man was arrested by the Egyptian authorities recently for making a video critical of all religion. Alber Saber Ayad, an activist from the 2011 uprising was charged with “defamation of religion”. If convicted he could receive a six-year prison sentence.