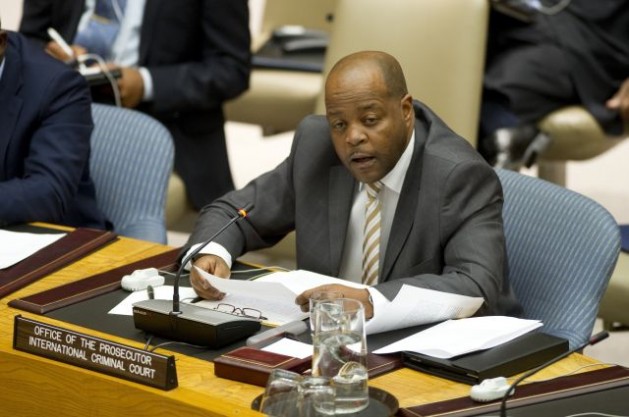 Phakiso Mochochoko, representing the Office of the Prosecutor of the International Criminal Court (ICC), addresses the Security Council’s open debate on the promotion and strengthening of the rule of law in the maintenance of international peace and security, and the role of the ICC. Credit: UN Photo/Rick Bajornas

UNITED NATIONS, Oct 18 2012 (IPS) - Ten years after the International Criminal Court (ICC) opened its doors in The Hague, the United Nations Security Council held its first open discussion on the role of the court, with some nations reiterating complaints that its docket is highly politicised and has unfairly singled out African nations for censure.

The ICC is the only permanent international court with a mandate to prosecute individuals accused of the most heinous crimes – genocide, crimes against humanity and war crimes.

The official seat of the court is in the Netherlands, but proceedings can take place anywhere in the world. The ICC has received complaints about alleged crimes in over a hundred countries, but investigations have only been opened into seven states so far, all of them in Africa – Uganda, the Democratic Republic of Congo, Sudan, the Central African Republic, Kenya, Libya and Cote d’Ivoire.

During the debate on Wednesday, representatives from several countries expressed concerns about the Security Council taking politicised decisions about which cases to refer to the Court.

The fact that the Security Council has not referred the burning case of Syria to the ICC, for example, was highlighted by representatives from a number of states.

Human Rights Watch  recently sent a letter to 121 foreign ministers urging them to address the inconsistency of the Security Council’s referrals to the ICC. The letter calls for a development of a “coherent approach for referrals… to avoid double standards”.

”What I found most enlightening was the second part of the debate, with excellent interventions of non-Security Council members,” Richard Dicker, international justice director at Human Rights Watch, told IPS. “You heard again and again the same phrases repeated, a call for consistency.”

Under the ICC’s founding treaty, the Rome Statute, the Security Council shall refer a situation in any country to the ICC prosecutor if it determines that the situation amounts to a threat to international peace and security. But according to Human Rights Watch, the Council has failed to refer cases that are politically controversial, such as the situation in Gaza or Syria.

Human Rights Watch especially highlights the influence of the United States, Russia and China, all permanent veto-wielding members of the Security Council, and accuses the superpowers of going after their perceived enemies while protecting leaders of countries that they have close ties with.

”What I found lacking in the U.S. ambassador’s comment today was any firm commitment to an ICC referral on Syria,” Dicker said.

He said that even when it comes to the two cases that the Security Council has managed to refer to the ICC – Libya and Sudan – the actions of the Council have been insufficient.

For example, the Council referred the case of Libya unanimously to the ICC. But once the Muammar Gaddafi regime fell, the Security Council no longer actively supported the ICC investigation, nor did it press Libya’s new government to cooperate with the court.

”The court is just a light switch for the Security Council members to turn on and off to advance their political agenda… The Council seems to regard the ICC as a marriage of convenience,” Dicker told IPS.

”The ICC is a young institution… with plenty of work and progress, and still much to learn,” Sang-Hyun said.

He also expressed concern about funding, noting that “it is difficult to sustain a system” where the Security Council can refer cases to the ICC on behalf of all 193 U.N. member states while the cost of pursuing the cases is paid only by states parties to the ICC, those which have ratified the Rome Statute.

Currently, 121 nations are formal members of the ICC, 33 of them in Africa. While the African Union has advised its members not to cooperate with the ICC arrest warrant issued against Sudanese President Omar Hassan al-Bashir, Malian government officials recently went to The Hague to request that an investigation be opened into atrocities committed by Islamists in the country’s north.

Speaking to Women News Network, the president of the Assembly of State Parties to the Rome Statute said she is working to restore political support for the International Criminal Court (ICC).

“Yes, there are concerns that there is less political enthusiasm about the court right now, and one of the reasons is quite obvious. The court is 10 years old so a lot of countries who in principle are very committed, they just take the court for granted. A lot of countries do not realise how much political support the court still needs,” said Ambassador Tiina Intelmann.

“They are forgetting that we are really in the business of trying to bring perpetrators of atrocities to justice. And it just so happens that very often the perpetrators of such crimes are people who have held or are holding high positions (in government). So, by definition, political support is necessary because these issues, besides being legal, are also political.”