Where Drugs Abound – and Syringes to Fight AIDS Are Scarce 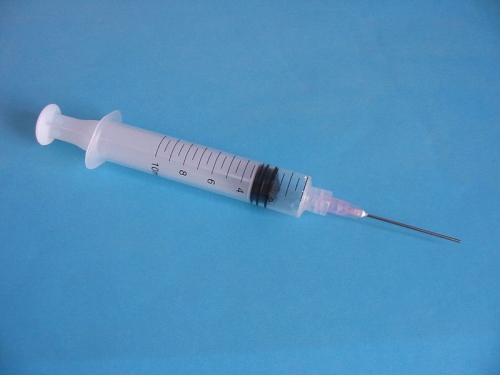 The cost of syringes to reduce the spread of AIDS would not cripple the Mexican budget. Credit: CC BY-SA 3.0

MEXICO CITY, Oct 11 2012 (IPS) - In northern Mexico, one of the areas in the country hit hardest by drug trafficking, there are not enough syringes to protect intravenous drug users from HIV/AIDS and hepatitis.

“It is a serious public health problem, because they are sharing needles,” the director of the non-governmental organisation Programa Compañeros, María Ramos, told IPS. “Added to their risky practices, they are living in conditions of extreme poverty, which means they don’t have the money to buy injection kits.”

Programa Compañeros was founded in 1993 to raise awareness on HIV/AIDS and provide assistance to patients in Ciudad Juárez, on the U.S. border, where the organisation estimates that there are about 7,000 intravenous drug users.

“The (needle swap) programmes function to the extent that drug users have access to them, but the problem is that this issue overlaps with the questions of security and drugs,” added Ramos, referring to the deployment of troops to fight drug trafficking organisations in the border city, which in 2010 had a population of 1.3 million.

According to a project financed by the Global Fund to Fight AIDS, Tuberculosis and Malaria since 2011, the prevalence of HIV/AIDS in Mexico is 5.77 percent among intravenous drug users – 5.4 percent among women and 7.77 percent among men – compared to 0.24 to 0.3 percent in the general population aged 15 to 49.

The cities with the largest numbers of intravenous drug users are Tijuana, Ciudad Juárez and Hermosillo, in the north, according to the project “Strengthening the national strategies of prevention and harm reduction targeting men who have sex with men, sex workers, and intravenous drug users”.

There are 28 syringe exchange programmes in this country of 112 million people, insufficient to serve the entire population of intravenous drug users.

The programmes distribute an average of seven syringes a year to each user, when “more than 200 per year are needed,” according to the National Report on Progress in the Fight against AIDS.

The Joint United Nations Programme on HIV/AIDS (UNAIDS) estimates that needle exchange programmes should provide at least 100 per year per user.

“The government does not have a clear policy on the distribution of syringes, because it is not seen as a priority and because it is not fully understood. This is a form of transmission that can be easily prevented” but nevertheless, “access to syringes is difficult,” independent consultant Anuar Luna told IPS.

In Ciudad Juárez and Tijuana, a city of 1.55 million people with an estimated 10,000 intravenous drug users, addicts tend to shoot up at spots known as “picaderos”.

Each syringe costs 30 cents of a dollar. Considering that there are some 20,000 intravenous drugs users in Tijuana, Ciudad Juárez and Hermosillo combined, distributing 100 per year to each user would require a budget of 600,000 dollars a year.

In Tijuana, it is legal to purchase syringes without a prescription. But there are hurdles to obtaining them, according to a study carried out in 164 pharmacies in that city, published in 2011 by the U.S. Harm Reduction Journal.

Although 88 percent of the pharmacies sold syringes, an anonymous buyer only managed to purchase one in one-third of the cases, the study found.

Mexico has a target of cutting HIV transmission among intravenous drug users in half by 2015. To reach that goal, the programme “Strengthening the national strategies of prevention and harm reduction targeting men who have sex with men, sex workers, and intravenous drug users”, financed by the Global Fund to Fight AIDS, Tuberculosis and Malaria, is essential.

The Global Fund, a public/private partnership, disbursed 26.4 million dollars to attend the most vulnerable populations in 2011 and 2012. But last year it notified Mexico that it would not be able to finance the project for the entire five years, and invited the government to present an alternative proposal for a 12.2 million dollar project for 2013.

Under the project, injection kits and condoms were distributed in 2011 to 783 people out of a projected total of 1,500, in Tijuana, Ciudad Juárez, Hermosillo and Sonora.

However, it has been impossible to assess the impact of the initiative so far, an evaluation of the project states.

“The targets are set without considering the needs and opinions of drug users,” said Ramos, whose organisation has distributed 600 kits, thanks to assistance from the Global Fund. “We insist that they must be given a voice in designing policies.”

Drug users have no voice in the country coordinating mechanism, set up to coordinate implementation of the project and made up of representatives of government bodies, civil society organisations and academic institutions.

In a letter dated Sept. 13, Mexico’s minister of health, Salomón Chertorivski, asked the Global Fund to approve 12.2 million dollars in financing for 2013.

But that year, the plan is to expand the exchange of syringes in order to eliminate used needles, and to carry out campaigns on the ground, with the goal of reaching 7,713 people who will be given kits in Tijuana, Ciudad Juárez and Hermosillo.

“The problem will be when the financing runs out. Then it will have to be evaluated how to fund the national effort,” Luna said.