Acquittal in The Hague Sparks Controversy

BELGRADE, Nov 24 2012 (IPS) - Stojan Kovacevic spent last weekend going about his usual routine in his tiny dwelling in the village of Grocka, near Belgrade: cleaning the kitchen and bedroom, going to the local green market and watching TV. 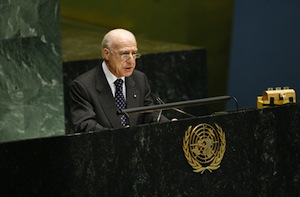 But it was not as pleasant as it sounds. Kovacevic (55), a Serb who fled Croatia in 1995, has had no home of his own for 17 years now. He rents a tiny flat and does many odd jobs to survive.

And last Friday, a news item that came to him on his small television set has only added to his troubles.

On Nov. 16, the Appeals Chamber of the International Criminal Tribunal for former Yugoslavia (ICTY), based in The Hague, overturned the convictions of two 57-year-old Croatian generals, Ante Gotovina and Mladen Markac, who had been sentenced in April 2011 to 24 and 18 years respectively for war crimes and crimes against humanity.

The generals were pronounced guilty for their roles in the notorious Operation Storm, a four-day military offensive in August 1995 in which hundreds of Serb civilians were killed and over 200,000 expelled from the predominantly Serb region of Krajina in Croatia.

The operation ended the rebellion of Krajina Serbs against Croatia’s 1991-1995 independence drive from former Yugoslavia. It also signalled the end of centuries of Serb history in Croatia, as long columns of refugees on tractors and trucks flooded into Serbia.

That was how Kovacevic arrived in Grocka, a village 30 kilometres east of Belgrade, after putting his mother, father, sister and her three children into a small truck fleeing the Croatian artillery attacks on his hometown of Gracac.

Their home was later burned down, as were scores of others in the cities of Knin, Obrovac, and Benkovac.

Like most Krajina Serbs, Kovacevic and his family never went back.

The controversy over Operation Storm blocked Croatia’s road to membership in the European Union (EU) for years, and also impeded normalisation of relations between Croatia and neighbouring Serbia.

But the acquittal of the two generals last week suggests that the history of Operation Storm is about to be re-written; the decision led to a patriotic frenzy in Croatia and left thousands of Serbs flabbergasted.

“I have barely been able to sleep or eat since Friday, when I saw the broadcast from The Hague,” Kovacevic told IPS. “I felt a blow to the stomach and it won’t go away… My world fell apart once again and the sense of injustice will stay as long as I’m alive,” he added.

As Gotovina and Markac returned to their homeland last Friday to a heroes’ welcome – with Croatian President Ivo Josipovic declaring, “The generals are innocent” – the mood in Serbia was one of shock and disbelief, with President Tomislav Nikolic calling the acquittal “scandalous”.

Savo Strbac, head of the Documentation Centre ‘Veritas’, a representative group for Krajina Serbs in Belgrade, labelled the decision a “slap in the face”.

“It also looks as if everything surrounding international justice in cases of war crimes will (now) be called into question as well,” Natasa Kandic, a prominent Serbian human rights activist, told IPS.

“The court ruling did not bring justice to the victims,” she added.

Internal disagreements between judges within the appeals chamber have fanned the flames of controversy.

Two out of five international judges – Fausto Pocar and Karmel Agius – opposed the acquittal, standing against two important decisions made on Friday: that the indiscriminate shelling of Krajina towns was not unlawful and that there was no joint criminal enterprise (JCE) with Gotovina, Markac and the then Croatian head of state, Franjo Tudjman, to forcibly expel the Serb civilian population and settle the area with Croats.

JCE is a term established by the ICTY and represents the basis for most war crimes trials, including the trial of late Serbian President Slobodan Milosevic and the ongoing trials against ex-Bosnian Serb general Ratko Mladic and Bosnian Serb leader Radovan Karadzic.

More than 30 sentences by the ICTY, including one life sentence and several sentences of 35 and 40 years, used the JCE as a basis for judgements.

Judge Pocar said in his separate opinion in the appeals decision, “I fundamentally dissent from the entire appeal judgment, which contradicts any sense of justice.”

For Belgrade attorney Novak Lukic, who defends some indictees before the ICTY, “It’s unbelievable that judges could differ so much in opinion – both within the appeals chamber and in regard to the sentence pronounced previously by their colleagues.”

“The ICTY has basically changed its legal postulates with this acquittal; this sentence calls into question many other sentences dealing with deportations or evictions,” he told IPS.

For Katarina Subasic, an international journalist who covers war crimes, the acquittal could impact ongoing trials, such as those of Mladic and Karadzic, who stand accused of war crimes for the massacre of more than 7,000 Muslim men and boys in Srebrenica, in July 1995.

“The idea of JCE has lost ground and that will undermine any process against military and political leaders (for the charge) of war crimes before the international courts…We see what is happening in Gaza now, Syria and what happened in Libya. The acquittal will bring controversy that will remain” and have echoes in future trials, she added.

According to the prominent historian Dubravka Stojanovic, “The acquittal shows that the ICTY can no longer represent the instrument of reconciliation in the region.”

“The ICTY was, for me, an instrument that could clear up some events from the wars (of the 1990s), involving all its participants (Bosniaks, Croats and Serbs),” she told IPS.

“Now it looks unwise to me; first a harsh JCE-based sentencing of 24 and 18 years, now an acquittal…the ICTY has lost credibility,” she concluded.