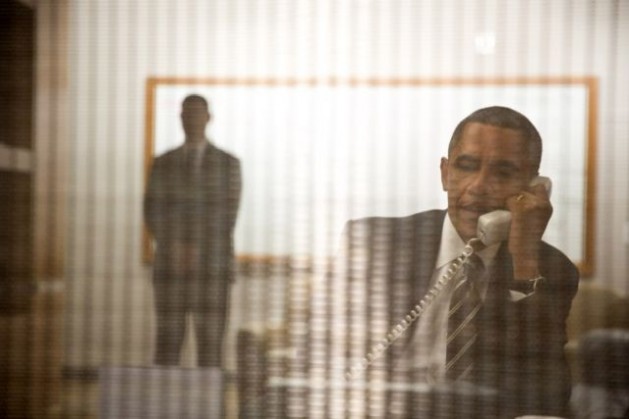 Obama will be constrained by certain political realities, most notably the fact Republicans will still hold a solid majority in the House of Representatives and 45 seats in the Senate, enabling them to effectively block any legislation to which they are strongly opposed. Credit: Official White House Photo by Pete Souza

WASHINGTON, Nov 8 2012 (IPS) - With President Barack Obama winning re-election, foreign policy analysts here are pondering whether his victory will translate into major changes from the rather cautious approach he followed overseas in his first term.

For now, speculation is focused primarily on the Middle East, the region that has dominated the international agenda since 9/11, much to the frustration of those in the Obama administration who are hoping to accelerate Washington’s “pivot” to the Asia/Pacific, especially in light of growing tensions between China and Japan and the ongoing political transition in Beijing.

Others are hoping that Obama will be willing to invest a fair amount of whatever additional political capital he gained from his victory on reviving international efforts to curb global warming, a challenge that thrust itself back into public consciousness here with hurricane-force winds as “Super-Storm Sandy” tore up much of the northeastern coast, including lower Manhattan.

Indeed, long-frustrated environmental groups seized on Obama’s allusion to the “destructive power of a warming planet” in his Chicago victory speech early Wednesday’s morning as a hopeful sign that the president, who hardly mentioned the problem during the campaign for fear of key coal-producing swing states, notably Ohio, may make climate change one of his “legacy” issues.

“President Obama’s legacy will be shaped by his ability to take on big challenges, including climate change, clean energy, environmental protection, and sustainability,” said Andrew Steer, president of the World Resources Institute (WRI).

As with climate change and other issues with major domestic implications, however, Obama will be constrained by certain political realities, most notably the fact Republicans will still hold a solid majority in the House of Representatives and 45 seats in the Senate, enabling them to effectively block any legislation to which they are strongly opposed.

“You’ve had an election that more or less preserves the status quo in the House,” noted Charles Kupchan, a foreign policy expert at the Council on Foreign Relations. “At a time when Obama’s top priority is getting the economy going, I’m not sure we’ll see a major initiative on climate change.”

And, while Obama won a sturdy majority of the electoral vote, his margin in the national vote is unlikely to exceed three percent when all the votes are counted. As a result, the institutional and partisan balance of power remains much the same as before the election.

Moreover, the fact that foreign policy did not play much of a role in a campaign dominated by the economy – only five percent of voters told pollsters as they left the voting booth that foreign affairs was the most important issue facing the country – suggests that Obama cannot claim a clear mandate for major policy changes.

Still, the fact that his Republican challenger, Mitt Romney, dropped his earlier hawkish, neo-conservative rhetoric as the election approached and essentially embraced Obama’s general policy approach, including even in the Middle East, in the closing weeks of the campaign was taken by some as a green light, if not a mandate, to pursue the president’s instincts.

“The election campaign, and not only the outcome, should be seen as the rout of the neo-conservatism of the disastrous 2001-2006 period of the Bush administration and the consolidation of a broad, bipartisan foreign policy consensus,” wrote Middle East analyst and occasional White House adviser Marc Lynch on his foreignpolicy.com blog Wednesday.

He predicted that what he called Obama’s “caution and pragmatism” in the region, particularly with respect to generally supporting democratic transitions, seeking ways to convene Israelis and Palestinians, engaging moderate Islamists, and pursuing Al-Qaeda and its affiliates, is unlikely to change, although he suggested that bolder approaches in some areas were called for.

In particular, the administration should begin “serious efforts at real talks with Iran” on its nuclear programme and “be prepared to take yes for an answer,” he wrote, echoing a consensus among realists in the foreign policy establishment that Obama will have greater flexibility to strike a deal with Tehran now than at any time in the last two years.

Reports of back-channel talks between the U.S. and Iran in preparation for a new round of negotiations between Tehran and the so-called P5+1 powers after the election have been circulating for two weeks.

Lynch also called for Washington to get behind a major push to unify the two main Palestinian factions and “encourage the renewal of a peace camp in the upcoming Israeli election” in hopes reviving serious efforts to achieve a two-state solution – a recommendation that also been urged by many analysts disappointed by Obama’s failure over the last two years to apply real pressure on Israel to halt the growth of Jewish settlements in the West Bank and East Jerusalem.

Since 2010, Obama and his fellow Democrats have avoided confronting Israeli Prime Minister Benjamin Netanyahu – who made little secret of his support for Romney – on either issue in major part because they felt their re-election chances depended heavily on the neutrality, if not the goodwill of the powerful Israel lobby.

Remarkably, however, those fears appear to have proved largely unfounded. Despite the expenditure of tens of millions of dollars in swing states on ads by the hard-line neo-conservative Republican Jewish Coalition and the Emergency Committee for Israel, as well as repeated charges by Romney that Obama had “thrown Israel under the bus,” 70 percent of Jewish voters opted for the president – a result that suggested that at least those hard-line neo-conservative elements of the lobby most closely tied to Netanyahu and the settler movement were not nearly as powerful as generally believed.

If so, Obama may have more room for manoeuvre on both Israel-Palestine and Iran, if he chooses to exercise it, than he himself previously thought.

Indeed, the election results were greeted with some considerable anxiety by Netanyahu’s supporters both here and in Israel.

“I believe that he will forcefully act to progress on all three fronts, and this could bring him into conflict with Israel,” he added. “So start filling your sandbags. We’re in for a rough ride.”

Moreover, surveys of Jewish voters nationwide and in the swing states of Ohio and Florida commissioned by J Street, a “pro-peace” Zionist group, found that Obama’s tally among Jewish voters was only four percent less than in 2008 – roughly the same proportionate loss he suffered among virtually all demographic groups, except Latinos, who increased their support for the president significantly compared to four years ago.

The surveys also found overwhelming (79 percent) support for the creation of a Palestinian state in the West Bank and Gaza and East Jerusalem, 76 percent support for an active U.S. role in negotiating a settlement, as well as a significant plurality for continuing diplomacy with Iran.

“I think the chances of a major push on the peace process are slim,” said Charles Kupchan, a foreign policy expert at the Council on Foreign Relations. “That would happen only if there is an opening of sorts in the region or if it comes primarily from within Israel and a shift in the electoral landscape there that gives it Netanyahu an incentive to do something bold.”

“The one place you’ll see a growing footprint and presence and growing activism,” he said, will be in Asia, especially if “things heat up more over territorial disputes between China and its neighbours. And the new Chinese leadership may pursue a more confrontational stance which could in turn invite an American response in kind.”