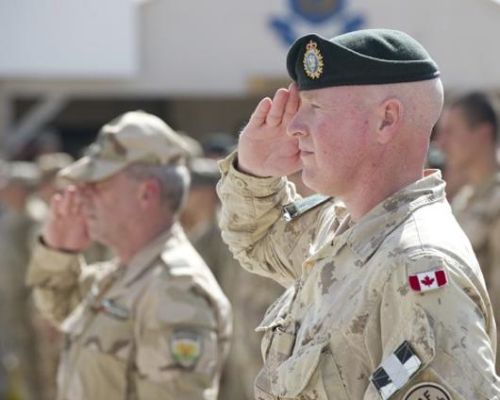 TORONTO, Nov 21 2012 (IPS) - Canada’s military buying binge under the current Conservative government has hit a financial brick wall in these austere times, but there is no nostalgic return in sight for Ottawa’s once robust participation in United Nations-led peacekeeping missions.

Walter Dorn is one of the very few professors in the Canadian Forces’ military schools still teaching a course on peace support operations to Canadian officers. “There is a tendency in the senior ranks to look down on U.N. peacekeeping,” he told IPS.

During the Cold War tensions between the United States and the Soviet Union, Canada was a recognised international leader in terms of offering its military to mediate between warring parties in hotspots like Cyprus and the Suez.

But following the fall of the Berlin Wall in 1989 and especially after the 9/11 terror attacks on New York and Washington, Canada has reoriented the Canadian Forces with new purchases of planes, ships and other expensive hardware to play its part in the so-called “war on terror” led by the United States.

The tipping point came in the last decade, when Canada contributed a few thousand soldiers and support personnel to the NATO mission in Afghanistan, now fighting a difficult and protracted war against the Islamic fundamentalist Taliban forces, which previously ran the Central Asian country.

Compared to the U.S. or UK contingents, it is a relatively modest deployment. But for Canada, the self-declared “peaceable kingdom”, the Afghan engagement also represented a sea change for a country that had not participated in a major war since sending soldiers to the Korean peninsula in the early 1950s.

“(We) have put so much more emphasis on counterinsurgency operations that peacekeeping dropped by the wayside. Plus, there are now so many (Canadian) officers who don’t have experience in peacekeeping operations,” added Dorn.

Another major change was the planned long-term outlay of 490 billion dollars for new military hardware, including the controversial F-35 stealth jet fighters and an array of new naval vessels, as part of the Canada First defence strategy –ironically introduced by the pro-military Conservative federal government in 2008, the year of the world financial crisis.

Canada First also included a commitment to both extended international missions such as Afghanistan and shorter term deployments “in response to crises elsewhere in the world” such as Libya, where Canadian jet fighters and one naval war ship participated in the 2011 NATO mission to assist in the overthrow of the Muammar Gaddafi.

But the promised 490 billion dollars was never very realistic and is finally being reconfigured to meet a new financial situation in Canada, said Philippe Lagassé, a University of Ottawa defence expert.

“It wasn’t affordable to begin with, and it certainly is not affordable now,” he told IPS.

Recently, Prime Minister Stephen Harper made it plain in his across-the-board austerity cuts for federal government departments and agencies that the very large Department of National Defence can easily reduce its excessive administrative costs without doing damage to the Canadian Forces operations.

Essentially, DND is being instructed to take out 2.5 billion dollars from its annual 22.8-billion-dollar annual budget.

University of South California Canada specialist Patrick James describes this announcement as a “blessing in disguise” for Harper because it permits the PM to fully implement his 2006 election promise to ramp up security for a resource-rich and insufficiently defended Arctic, now undergoing warming because of climate change.

“Canada doesn’t have anything like the military spending of the United States, even per capita for the moment. But it is getting pretty big and it is not a bad idea when you have a bureaucracy that has been expanding steadily for an indefinite period of time to have a pause as you will and take a really cold, hard look,” James, author of “Canada and Conflict”, told IPS.

Yet there is resistance in DND, resulting in a rift between these natural allies, the Conservatives and the Canadian military, observes Lagassé.

“I think this government feels burned by the procurements. They don’t feel that Afghanistan really turned out all that well for them,” he said.

“Both the military and the Conservatives approached each other with the assumption that they were going to be very close. Like any government, they are starting to realise that DND kind has a mind of its own, and it does its own thing. That is not easy for them to deal with.”

This is a complete switch from what occurred after Harper and the Conservatives came to power in 2006, initially heading a minority government, and faced an Afghan combat mission started by the previous Liberal government. The then new prime minster made the declaration that Canada would not “cut and run” from its responsibilities under NATO.

Michael Skinner, a researcher with the York Centre for International and Security Studies, argues that the differences between Harper and the military are somewhat overblown.

“Whether it is orchestrated or not, the options are really good for the government, they can play both sides. On one side they can say ‘we are pro-military and want to support Canadian forces,’ and on the other side, they can say to all of the peaceniks, ‘look we have to cut back on military spending,’” he told IPS.

Skinner says that the planned 2.5-billion-dollar cut in defence is reasonable and doable since it will probably include both buyout packages for middle-level DND administrators and close to retirement senior officers, and the winding down of the expensive Canadian Afghan combat mission.

“The Harper government is playing an accounting shell game in order to maintain its aggressive foreign policy regime while simultaneously instituting domestic austerity. Considering the CF/DND budget increased 30.9 billion since 2001, a rollback of two billion (or even 2.5 billion as one analyst claims) is not very significant,” he noted.