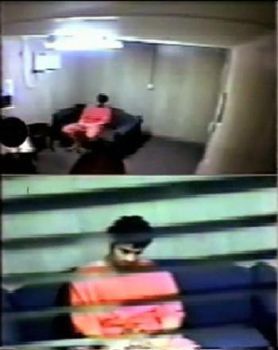 This image is taken from a video secretly recorded when 16-year-old captive Omar Khadr was interrogated by Canadian officials in Guantanamo. Credit: Public domain

One thing is certain: Khadr’s release last weekend to Canadian custody after 10 years has proven highly provocative. His return to Canadian soil has triggered passionate debate about how he should be regarded and whether a man born into a radical family championing terrorism can reintegrate into a society he barely knows.

The tendency to characterise Khadr as a convicted war criminal, given that his confession was made under duress, indicates there are “so many factors related to this particular case that are not being challenged enough” and that the context of children’s use in armed conflict must be reexamined, said Dr. Shelly Whitman, the director of Dalhousie University’s Child Soldiers Initiative in Halifax, Nova Scotia.

Now 26, Khadr, a Canadian citizen, was a 15-year-old when captured during a 2002 firefight with U.S. military forces in Afghanistan. He threw a grenade, killing Sergeant First Class Christopher Speer, for which he pleaded guilty to murder, although his supporters argue evidence points to a death resulting from friendly fire.

Khadr, whose sentence began in 2010 and will end in 2018, also admitted to providing material support for terrorism, attempted murder, conspiracy and spying, according to a statement issued by Public Safety Minister Vic Toews over the weekend. The minister added that Khadr, raised in Canada, Pakistan and Afghanistan, was an Al-Qaeda supporter whose accomplices included Osama bin Laden and Ayman al Zawahiri.

While Khadr’s life thus far has been a whirlwind of activity, the challenges will not end once he is a free man. Whitman told IPS that he will face hurdles to find employment, struggles to catch up with education and “deep problems” from a psychosocial perspective because he experienced torture. However, she cast doubt on the negative influences of his family.

“As far as I’m concerned, this notion that because they have an association and they’ve said some things which are viewed as radical to others in this country, it doesn’t mean necessarily that he’s going to want to commit anything (that forces him) to go back to prison… Why would he do anything to jeopardise going back to that context?”

A poll conducted last month suggested the aversion of many Canadians to Khadr’s return, a problem some say is rooted in the tendency of his portrayal as a child soldier or as a terrorist.

Under the Paris Principles of 2007, guidelines to protect children from recruitment and to assist those already involved with armed groups, “the things that define a child soldier are the very things that would define a child terrorist,” Whitman said. As it stands, there are perception problems in Canada about the definition of a child soldier, a worldwide phenomenon involving boys and girls assigned a variety of roles depending on the particular conflict, she said.

Gail Davidson, executive director of Lawyers’ Rights Watch Canada in Vancouver, disagrees with both the terrorist and child soldier claims.

The United States has not presented any evidence to any court that Khadr threw the grenade killing the U.S. soldier, she told IPS, adding that it would have been classified as “murder according to the laws of war” had he, as an armed combatant, killed an opponent.

The October 2010 plea agreement by which the U.S. government agreed to limit his additional imprisonment to eight years if he pleaded guilty to all the U.S. offences “should be properly viewed as a confession obtained through the use of torture and not as a reliable and legitimate determinant of guilt or innocence”, she said.

During his detention, Khadr complained of being forced into painful stress positions, threatened with rape and rendition to third-party countries, hooded, and confronted with barking dogs, some of which was confirmed by U.S. government witnesses, according to a Sep. 29 press release issued by Human Rights Watch. The organisation added he was denied legal counsel until 2004.

For the most part, Khadr has received positive assessments by psychiatric experts.

Last year, psychiatrist Stephen Xenakis reported no “indication of aggressive or dangerous behavior” after 300 hours of interaction with Khadr, who has “consistently emphasized his goal to establish a constructive and peaceful life as a Canadian citizen”, according to a letter written to Minister Toews.

In several conversations, Khadr “repudiated” the beliefs of terrorist groups and demonstrated a “capacity to engage with others in a healthy way”, added Katherine Porterfield, a clinical psychologist for the defence team, in a letter to the minister in 2011.

Still, there are detractors, among them psychiatrist Michael Welner. Welner worked with Khadr for 500 to 600 hours and described him as dangerous. Citing the Canadian’s demonstrated capacity to kill, Al-Qaeda affiliations and “hardened” family members conveying “belligerence towards the United States”, Werner testified that he feared the young man’s history and associates will all “contribute mightily” to bolstering Al-Qaeda’s North American presence.

Khadr advocates are concerned that Welner’s testimony heavily influenced the Canadian government. Upon Khadr’s release to Canadian authorities, the public safety minister expressed anxiety about the 26-year-old’s romanticisation of his father’s activities (which he viewed as NGO-related) and many of the issues raised by the psychiatrist. Ottawa pledged to offer appropriate programming during Khadr’s imprisonment and strict conditions if he is granted parole as early as next year.

Other reintegration proposals are based on keeping Khadr away from the negative influences of his family, but it was never clear which feasible assurances could be offered since media reports indicate his family wishes to see him, David Harris, the director of the international and terrorist intelligence programme at INSIGNIS Strategic Research Inc. in Ottawa and a former chief of strategic planning for the Canadian Security Intelligence Service, told IPS.

Overall, the saga of Omar Khadr has been impacted by “possible simple-mindedness” surrounding the question of his child-soldier status, as some have insisted on the label without fully examining the specific merits and implications of the evidence, Harris said. Certain individuals have regarded as “wholly irrelevant” the issue of criminal responsibility, he added.

These “sentimental” views neglect to a large extent the public safety implications of cases like Khadr’s and understate the “burgeoning terror issue that I fear will become an extremely prominent feature of Canadian life”, Harris said.