Cooperatives as Business Models of the Future 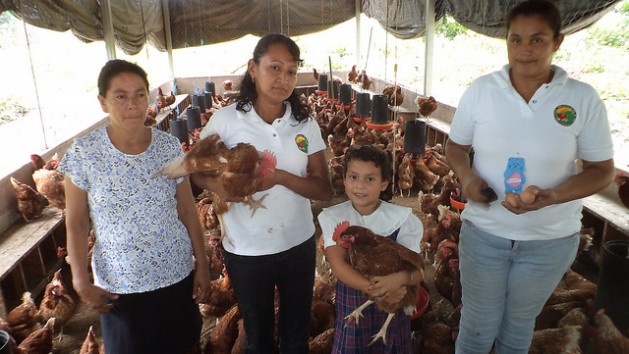 Three members of the Verapaz egg farm cooperative in El Salvador, with one of their daughters. Credit: Edgardo Ayala/IPS

UNITED NATIONS, Nov 26 2012 (IPS) - When the International Year of Cooperatives (IYC) concluded last week, some of the overwhelming success stories highlighted at a two-day interactive session came both from developing and developed countries, including India, Brazil, China, Kenya, Rwanda, Ethiopia, Italy, France and the United States.

Amul, which is owned by over three million small dairy farmers, mostly women, has helped elevate India as the world’s largest milk producer.

And last month, IFFCO partnered with Coop Federee, a major agricultural cooperative in Canada, to invest in a hefty 1.3-billion-dollar joint transnational cooperative venture for a fertiliser plant in Quebec.

In Brazil, Green said, a clearly defined government policy aimed at helping rural people, through cooperative businesses, has seen a massive reduction in poverty in the rural areas of the sprawling South American nation.

In Kenya, cooperatives account for nearly half of the country’s gross domestic product (GDP), while in Rwanda the cooperative economy has gone from zero to eight percent of GDP over the last 10 years.

“The cooperative model of business could be a valuable tool in building sustainable, grassroots agricultural businesses in Africa,” she added.

In Italy, she pointed out, about 90 percent of the production of parmesan cheese comes from cooperatives, while nearly all of the champagne produced in France is the result of cooperatives.

A Roadmap for the Future

Asked what next for post-IYC, Felice Llamas, focal point on cooperatives at the U.N.'s department of social policy and development, told IPS that U.N.-related action on cooperatives will be guided by the proposed International Plan of Action for 2012 and Beyond.

Into the short and intermediate terms, this plan will serve as a preliminary roadmap for coordinated activities and policies concerning cooperatives.

"This instrument is crucial as it will maintain the momentum of IYC by sustaining collaboration among the full spectrum of stakeholders - from member states and cooperatives, to academia and civil society organisation," she said.

Over the longer term, she said, the U.N. anticipates that cooperatives will continue to grow, not only in terms of business and public visibility, but in regards to policymaking.

Asked if cooperatives will find a place in the U.N.'s post-2015 economic agenda, Llamas told IPS that cooperatives are viewed as crucial participants in any economic development agenda, and "we will work to have cooperatives included in the UN's post-2015 plans."

To this end, the proposed Plan of Action will seek to align cooperative objectives and action on this front with those of the U.N. and its specialised agencies.

"Now that cooperatives are widely recognised as crucial to people empowerment, employment generation and social protection, they will have an increasingly significant role to play in the future," she added.

It is foreseen that in addition to the U.N.'s Department of Economic and Social Affairs, specialised agencies such as FAO, the International Labour Organisation (ILO) and the U.N. Development Programme (UNDP), among others, will continue to guide and coordinate action on cooperatives within the context of their specific fields.

Currently, youth unemployment and food security are major priorities, so the U.N. agencies will provide the necessary support so that cooperatives can effectively direct efforts to address these issues.

And in the United States, Ocean Spray, described as one of the world’s largest cranberry producers, registered a 20-percent increase in sales last year.

She pointed out the important role cooperatives have played in building economic prosperity in Brazil, Russia, India and China (known, along with South Africa, as the emerging new coalition BRICS).

But in troubled regions like the Eurozone, cooperatives have also demonstrated that generally they are more resilient to the downturn than non-cooperative businesses, while cooperative banks are actually protecting against market failure.

“Moreover, we are seeing cooperatives choosing to release surplus capital rather than sack people in difficult markets like Spain,” Green said.

In Spain, the Mondragon workers cooperative has seen its members vote for two years running now to take pay cuts rather than lose people.

“It’s a recognition of the value of human capital in business. All of this in fact means that cooperatives are sustainable businesses and supporting and promoting them will help ensure we can climb out – and stay out of the financial crisis in which so much of the world once again finds itself,” Green said.

In a statement released here, U.N. Secretary-General Ban Ki-moon said there continues to be a hunger for policies and approaches that address social and economic goals that go beyond a one-dimensional bottom line.

As a strong partner in development, Ban said, the cooperative movement works with the United Nations every day to empower people, enhance human dignity and help achieve the Millennium Development Goals (MDGs), which include the reduction of extreme poverty and hunger by 50 percent by 2015.

The theme of 2012 World Food Day, commemorated on Oct. 16, was “Agricultural Cooperatives – key to feeding the world.”

According to U.N. figures, the number of hungry people worldwide has been estimated at nearly 870 million.

Jose Graziano da Silva, director general of the Food and Agriculture Organisation (FAO), said “cooperatives hold a key to feeding the world, but so do governments, civil society and private sector (in order) to achieve food security for all. We all need to work together.”

In its declaration presented to the United Nations, the 2012 International Summit of Cooperatives, held in Quebec City, Canada last month, reinforced “the amazing power or cooperatives”.

Pointing out that the cooperative sector is pervasive, Green told IPS that far from just being restricted to agriculture and farming, cooperatives touch every part of business.

Insurance, banking, health, housing, retail and education are all sectors which have strong cooperative components.

In the UK, she said, schools have become one of the fastest-growing parts of the cooperative economy.

“Renewable energy cooperatives have been springing up all over the globe, and of course media is another area which benefits from the cooperative model because it ensures independent journalism remains viable,” she noted.

In the northern part of Italy, social cooperatives are a significant feature of the regional economy where people with a disability, whom would otherwise be reliant on the state for support, or be part of the long-term unemployed, are starting and successfully running their own cooperatives.

Asked about the future, Green said: “We will of course be working closely with the UN to ensure that cooperatives are a key piece of its proposed 2015 economic agenda, but every indication from this meeting has been that cooperatives are ready and willing to enhance their engagement, and that the U.N. not only wants but needs us too.”