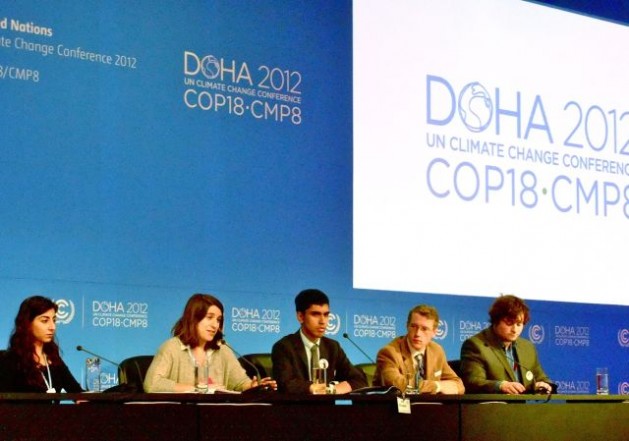 Youth delegates find it "incredibly frustrating" that so little is being accomplished at the Doha climate talks. Credit: Stephen Leahy/IPS

DOHA, Qatar, Dec 5 2012 (IPS) - While the Philippines copes with the aftermath of powerful super-typhoon Bopha, which killed more than 300 people this week, tempers flared at the U.N. climate summit here.

Developing countries are angry the U.S. and European Union and other rich industrialised countries refuse to increase their carbon emission reduction targets or agree to additional financing here at COP18.

The paralysis in Doha is the result of fossil fuel interests including the world’s richest billionaires, Charles and David Koch, allege activists.

The Koch brothers’ combined wealth is estimated to be 80 billion dollars. They have outspent all other oil companies – including Exxon – to kill U.S. climate legislation through campaign contributions, lobbying, funding denial science, attacking clean air laws, and stopping the shift in subsidies to cleaner energy, according to an analysis by the International Forum on Globalization, a U.S.-based NGO.

“The reason the U.S. doesn’t do more is that the Koch brothers and other fossil fuel interests attack any climate policies,” Victor Menotti, director of the International Forum on Globalization (IFG), told IPS.

The IFG report, “Faces Behind a Global Crisis”, documents the Kochs’ attempts to fast-track permitting of the tar sands oil pipeline from Canada, including the Keystone XL infrastructure, as well as attacks on the U.S. Environmental Protection Agency’s right to regulate carbon, and efforts to stop stronger standards for power plants.

“The Kochs cashed in by polluting our planet – economists would call them free-riders – and now they wield their wealth to rig the rules in their own favour,” the report said.

This report follows the 2011 study that identified 50 of the world’s wealthiest individuals who hold overwhelming influence over today’s global climate crises.

“There is too much power in too few hands. We need to get the money out of politics,” said Menotti.

President Barack Obama must ignore the politics of a few years ago and realise there is a powerful movement among young people fighting for action on climate, said a delegation of youth from the U.S.

“I worked for six months to help President Obama get elected. He knows youth want action on climate change, but we haven’t seen action from him on it,” said Hannah Bristol of Washington DC.

Bristol and four other young people from the U.S. held a press conference at COP 18 to send a message that climate must be a top priority for the Obama administration.

“The hundreds of campuses and communities fighting to move the U.S. beyond coal, beyond oil, and beyond natural gas are making astonishing strides,” said Ian Karra from Athens, Georgia. “But we cannot act fast enough, and we cannot act alone.”

After all the suffering and damage done by Hurricane Sandy in late October, they expressed deep disappointment the U.S. was not taking a lead here in Doha.

“It is incredibly frustrating there is so little action happening here in Doha,” Bristol told IPS.

“The Doha COP caravan is lost in a sandstorm. There is not enough ambition here,” said Ronny Jumeau, ambassador on climate change for the Seychelles, representing the Alliance of Small Island States (AOSIS).

Ambition refers to increased reductions in emissions primarily from burning of fossil fuels. Even if countries achieve their currently promised cuts, temperatures will likely rise between four and 10 degrees C based on latest science

Jumeau said island states and least developed countries not only want pledges from industrialised nations to make bigger cuts, but that those pledges are not voluntary but legally binding.

“We can’t be in a situation a few years from now where some countries say economic circumstances prevent them from meeting their pledges,” Jumeau said at a press briefing.

Ministers are reviewing documents Wednesday that make no commitments to increasing emission targets. However, Britain and Germany did make financial commitments to provide some of the promised finance to help developing countries cope with the current and future impacts of climate change over the next two years.

Industrialised countries have promised to put 100 billion dollars a year into a Green Climate Fund by 2020. To bridge the gap until then, developing nations are asking for 60 billion dollars in total by 2015. At the beginning of this week, there was no money for 2013 to 2015.

“Thank God someone is stepping up,” said Jumeau.

“The U.S. is not obligated to provide any additional financing,” said Jonathan Pershing, head of the U.S. delegation. However, Pershing did say the U.S. did intend to help out.

Three U.S. states damaged by Hurricane Sandy are asking for 83 billion dollars in federal government assistance to help them recover. Typhoon Bopha is the 16th weather-related disaster to hit the Philippines this year, said Jumeau.

“In the global context, is 100 billion dollars a lot of money?” he asked.