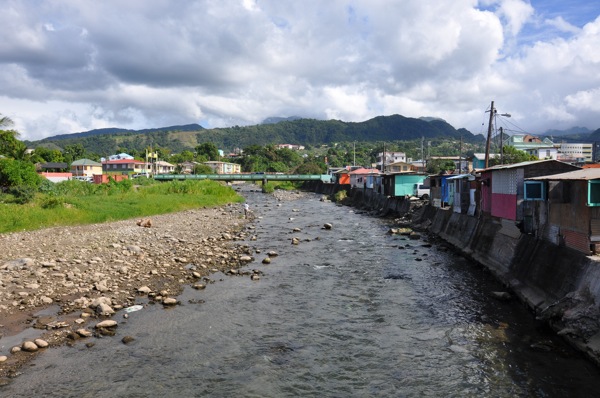 The Roseau River runs through the centre of Roseau. Once a favourite diving spot it has been reduced to a mere spring no longer suitable for swimming. Credit: Desmond Brown/IPS

ROSEAU, Dominica, Dec 17 2012 (IPS) - Eighty-year-old Rupert Lawrence has been living in the Dominica capital, Roseau, for nearly 60 years. Like visitors to the island, he too is fascinated by the fact that the town square has a river running right through its centre.

Sitting on his veranda on River Street overlooking the Roseau River, Lawrence recalled the words of many visitors who would remark that until then, they had never seen a river in the centre of town. But over the years, Lawrence has witnessed the transformation of the Roseau River from a deep diving spot attracting people from all over the island to a mere spring no longer suitable for swimming.

To put it bluntly, in the words of Bernard Wiltshire, an attorney who is president and founder of Waitkbuli Ecological Foundation (WEF), the Roseau River is drying up, like all the others on the island.

“They’ve been drying up because people have been using land without concern for the rivers,” he said. “That Roseau River, you could jump from the bridge into the river; head dive into the river. I remember in 1980 we could sit on the wall and dangle our feet in the water.”

Thirty years later, “the river has lost far more than two-thirds of its volume of water, and this pattern is repeated throughout the island,” Wiltshire added. He lamented that the Layou River, about seven miles north of the capital, which used to be the largest river in the country, is now “only a sand bank”.

“A lot of people pay no regard to maintaining a sort of a buffer zone along the banks of the river so they just cut everything down or even sometime rear animals on the river banks that would certainly destroy all the foliage and they would cut the trees for agricultural pursuits,” said Shillingford, who is also a disaster risk management consultant.

He said that unless there is “a radical shift in our approach to these things…the next generation might not have a Roseau River or a Grand Bay River.” He added, “A lot of policies in terms of land use planning and buffer zones and things of that nature need to be put in almost immediately. We are already late.”

Wiltshire said such developmental and agricultural activities have a big part to play in climate change, and Dominica is seeing its effects. “It’s largely from the big industrial countries which seem to put their greed before the need of everyone else,” he said.

“We have seen an increase in storms as well; the intensity has increased and we are certainly seeing some effects in terms of sea level rise,” Shillingford added. He noted that “before, the sea would be further away from the community”. Now, however, “It’s coming up to the community”.

In Dominica, he explained, “most of the habitation is on the coastal areas, and the western side…is much lower at sea level than the eastern side,” he added.

One of Dominica’s efforts to combat these issues is the recently formulated Low-Carbon Climate-Resilient Development Strategy, which identifies areas that climate change is most likely to affect – namely agriculture, fisheries and ecotourism.

Shillingford noted that coastal infrastructure always takes a heavy beating during a storm. The government has to spend millions of dollars reconstructing roads after every storm. He said although massive walls are being built with government funding along the coast in many villages to combat the effects of climate change, they do not provide complete protection.

Even with a massive wall along the Dame Eugenia Charles Boulevard in the capital, the whole road was torn apart as a result of Hurricane Lenny in 1999. Nevertheless, without the wall, Shillingford said, an entire section of the capital would have been devastated.

“We had at least four or five feet of water on the road…so not even the sea walls are foolproof for the kind of effects we can have from major storm surges,” Shillingford said. He is even more concerned about tsunamis, which he said “would be the end of everybody on the west coast” of the island. “You would have half of Dominica gone.”