COLOMBO, Dec 4 2012 (IPS) - Mahatma Gandhi said it with remarkable moral clarity – “An eye for an eye only ends up making the whole world blind.” That is indeed what happened in Gaza over eight days in November, with an estimated 160 Palestinians and six Israelis dead in the latest exchange of rockets and drones brought to an uneasy end by an Egyptian-brokered ceasefire. 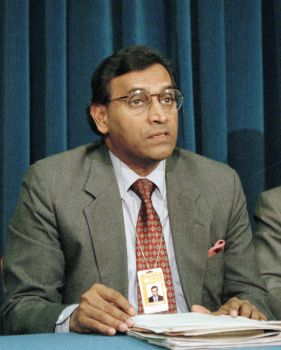 Jayantha Dhanapala is a former U.N. Under-Secretary-General for Disarmament Affairs

The recently re-elected U.S. President Barack Obama’s support for Israel was assured for the cynical exercise engineered by Israeli Prime Minister Benjamin Netanyahu in order to ensure his victory at the elections in January next year.

It is widely speculated that this was Obama’s quid pro quo for Netanyahu pulling back from his reckless intervention in the U.S. presidential campaign on the side of Republican challenger Mitt Romney. For good measure, Obama has unilaterally announced that the Helsinki Conference scheduled for December this year to discuss the proposed Middle East Weapons of Mass Destruction Free Zone (MEWMDFZ) will not take place.

This in spite of the fact that the responsibility of convening the conference was entrusted by the parties to the Treaty for the Nonproliferation of Nuclear Weapons (NPT) to the U.S., UK, Russia and the U.N. secretary-general in pursuance of which the facilitator from Finland had worked tirelessly.

In 1936, Aldous Huxley published a novel, “Eyeless in Gaza”, with the title drawn from the Biblical story of Samson blinded by the Philistines and put to work in Gaza and relating the story of a man whose passage in life leads to pacifism.

A peaceful settlement of the blockade of Gaza by Israel and an end to the scandalous conditions of its 1.7 million citizens is still very far away. However, the vote of the U.N. General Assembly on the upgrading of Palestine as an Observer State of the U.N. on Thursday, Nov. 29 is some solace to a brutally repressed people notwithstanding the acute rivalry between Hamas who control the Gaza and the Fatah, who heads the Palestine National Authority.

An overwhelming 138 voted for; nine (including the U.S., Israel, Canada and the Czech Republic) voted against; and 41 abstentions (including the UK, whose infamous 1917 Balfour Declaration promised the establishment of a national home for the Jewish people in Palestine).

Israel has retaliated by announcing more settlements in occupied territory in another blatant violation of international law.

Gaza is a sliver of land between Israel and the Mediterranean Sea illegally occupied by Israel after the 1967 Six Day War. Following the Oslo Accords, the area was ceded to the Palestine National Authority in 1993 but it was not until 2005 that Israel evacuated its settlers and withdrew its troops.

With the radical Hamas emerging on top from elections in 2006, tensions increased, with rockets being fired into Israel and sporadic Israeli bombing of Gaza.

A fortified fence built on Palestinian territory shuts Gaza citizens in, and an economic blockade has made life in the Gaza intolerable. A December 2008 attack called Operation Cast Lead by Israel was condemned internationally. Israel has capitalised on the labelling of Hamas as a terrorist group and the support it gets from Iran.

According to Palestinian officials, over 280 people were killed and 600 were injured in the first two days of airstrikes. Israel declared a unilateral ceasefire on Jan. 17, 2009. Hamas responded the following day by announcing a one-week ceasefire to give Israel time to withdraw its forces from the Gaza Strip.

After a long but uneasy truce, the assassination of Hamas commander, Ahmed al-Jabari by an Israeli air strike triggered the fighting in November 2012. Ironically, al-Jabari was involved in negotiations with the Israelis, including over the Gilad Shalit prisoner exchange.

It is clear that Obama will continue the traditional U.S. policy of protecting Israel with the veto it has in the U.N. Security Council and will continue to supply Israel with arms and ammunition to continue its denial of the rights of the Palestinians.

The negotiation of a peace settlement in the Middle East is on a back burner as Obama tries to sort out his domestic economic crisis. Meanwhile, the Arab Spring continues to create changes in Arab countries, and a new configuration with Saudi Arabia and Qatar emerging as influential power brokers has added further complications.

Waiting for the outcome of the Israeli elections appears to be the only option before any fresh diplomatic moves can be initiated. A two-state solution of Israel and Palestine in peaceful co-existence in still a long-term goal.

*Jayantha Dhanapala is a former U.N. Under-Secretary-General for Disarmament Affairs.