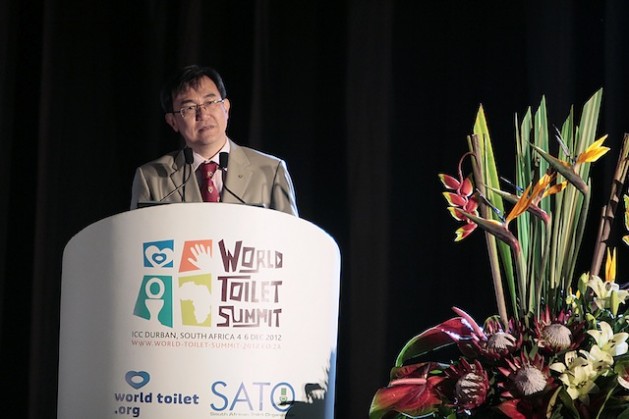 Founder of the World Toilet Organisation Jack Sim says that on the African continent there has been some progress in terms of the community-led total sanitation approach. Courtesy: Meropa Communications

DURBAN, South Africa, Dec 10 2012 (IPS) - When the founder of the World Toilet Organisation Jack Sim turned 40, he literally began counting how many more days he had to live and felt a sense of urgency to do meaningful things with the remainder of his life.

“Can you imagine a person coming into this world and spending his life only helping himself? When this person dies, his life has had no meaning, so why did he bother coming here?” he asks.

A successful businessman, Sim turned his attention to an area which he felt was severely neglected.

“The toilet was completely neglected in Singapore (his home country). I realised it was the same all over the world. People felt very embarrassed. Now I’ve broken the taboo and legitimised the subject through 12 years of effective advocacy. I am proud to say I have broken the taboo surrounding the subject of sanitation.”

Q:  Why is good sanitation so important?

A: To grow a country, you need healthy people. You rather prevent people being sick than cure them once they’re sick. Toilets are the cheapest preventative medicine in the world.

Proper sanitation, together with hand washing with soap, will reduce illness by between 50 to 80 percent. A lot of illness – diarrhoea, worms and other diseases – are basically due to the spread of pathogens from the faeces, transmission paths through the fingers, the feet, the flies and the fluid. If you can break this, people can be healthy.

We need covered toilets which flies cannot reach, people cannot step on, rain cannot wash away and spread, as well as a place to wash the hands. To achieve this we need education – why is a toilet good for you – make it a trend rather than a prescription. If it’s fashion, people will follow.

Toilets also need owners. Without an owner it will become dysfunctional very quickly. If someone buys a toilet, he feels he owns it. If he doesn’t own it, a sense of ownership has to be cultivated. People have to be trained as cleaners and as security personnel.

If you have no toilets, you get unhappy, unhealthy people – as a result of which you have low productivity, so low income. You then have to incur expenditure due to illnesses and this can break subsistence survival, creating a poverty cycle, which becomes a political problem. Good sanitation can prevent all these time bombs which will explode.

Q:  What progress has been made on the African continent in terms of sanitation?

A:  The good news is that Africa is currently experiencing one of its most peaceful periods in recent history. Because of that its economic growth is on average faster than even the Asian growth rate. When people have a little bit more money, they have higher expectations. So the demand for toilets is easier to create.

On the African continent there has been some progress in terms of the community-led total sanitation approach which triggers people to dig their own holes, thereby encouraging them to have their own rudimentary toilets.

Through this approach, people realise the need for a proper toilet quickly. They start by digging a hole and going to a fixed place to defecate. This is already a big change of behaviour – they suddenly feel disciplined; they feel the need to be private, to protect their neighbours.

So the first phase is just to go to a fixed place, and to cover the hole. It’s very rudimentary, but it’s better than being outside, where women can get molested.

In the second phase, people are encouraged to buy toilets, which cost between 50 to 100 dollars. Once they own them, jealousy and comparisons set in – and nobody likes to be looked down upon.

Q:  How high is that “demand” currently in Africa?

A:  What we need to do is to move the toilet to a higher level on the list of personal priorities – as high as the cell phone. For most people on the continent, the priority has been a television set, then a cell phone, but not a toilet. What we need to do is to make it fashionable to own a toilet – to convey the message that if you don’t have a toilet you’re living in an animal state. People don’t want to be classed as living in an animal state.

Q:  What about the supply side – how easy is it for an individual to access a toilet?

A: We have to make toilets available either by the government, or affordable for people to buy, with on-site treatment, safe sanitation, maintenance cleaners who are also professionally trained as technicians. And we also have to provide education for the community to care for their toilets so they can continue to enjoy using them. In other words on the supply side, the effort requires a combination of people, the government and the private sector.

Q: What about South Africa? Has any progress been made here?

A: A little bit. But the growth of informal settlements is creating a lot of difficulties, not just in terms of provision of toilets, but also where to put them. You can’t put a permanent structure on illegal land. Yet people need toilets. There needs to be some legal policy reform that allows a permanent toilet.

Why should it be mobile? Sometimes a mobile toilet is too far away to comfortably access. Also people are practising open defecation – so there’s a habit change barrier. They may ask, why should they use toilets which are not well-maintained, which are dirty and smelly and full and which can’t even be used?

The government is also not fast enough in terms of provision, but I think they are interested in speeding up the programme because they know that you can’t have a nation of sick people.

Q:  How is the World Toilet Organisation involved in improving sanitation in Africa?

A: We have partnered with Unilever to launch an academy. We are going to go to schools and encourage children to start using toilets earlier; when they use toilets at school, they’ll promote usage at homes.

Supply of toilets on the African continent has not caught up with demand. This academy will train people to manufacture toilets in very small factories, thereby making them businessmen making affordable products at a profit, selling to their own communities.

What happens is that sanitation now goes beyond health and hygiene, when a woman has an income she has more power at home, she can use her money wisely for the family, she has a bigger say when talking to her mother-in-law and husband.

So we’re creating gender equality and sustainability. We did very well in Cambodia. In three years 24,000 toilets were manufactured, generating 48,000 dollars for sales agents. We look forward to the day every person everywhere has access to a clean safe toilet at any time they need to go.