The Mindlessness of War in Afghanistan

War has ripped apart a majority of families in Afghanistan. Those who were lucky migrated to the West. 'Uncle' Ismail’s family, however, lies buried in a graveyard in Nangarhar. This is his testimony** 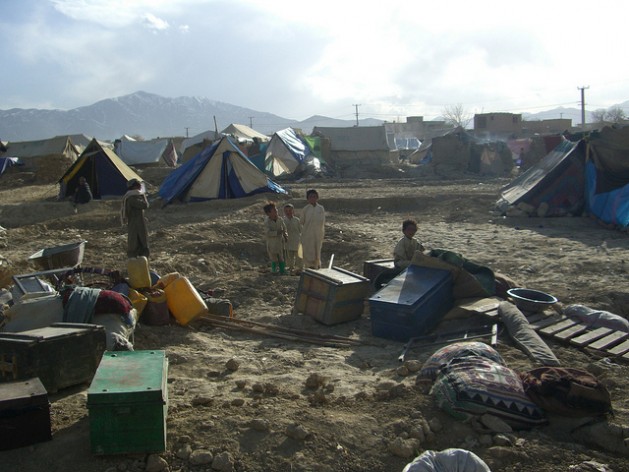 KABUL, Dec 30 2012 (IPS) - One night in 1979, bombs dropped from the sky, killing 16 members of Ismail’s family. “The war took some people to Europe and America, but it destroyed my family,” Ismail, who is universally addressed as “uncle”, says.

Hailing from the Haska Mena district in Afghanistan’s eastern Nangarhar province, he says his parents insisted he go to the only school in the district, in Shpole Baba. The times were tumultuous. The Soviet Union had invaded Afghanistan, and Babrak Karmal was installed the leader of the government in December 1979.

The new government’s opponents set fire to Ismail’s school. He remembers going up to the roof of his house to watch. “The fire destroyed my hopes of studying, and being a great man in the future,” he sighs.

Ismail started to help his father on the land. “People in our village were surprised that I switched so quickly from being a school boy to a farm worker,” he remembers, a soft smile on his face.

But the war was to change things again for Ismail. He remembers his father and he were ploughing the fields when six Soviet helicopters appeared in the sky. They circled the area three times, and then, suddenly, started firing. “They shot people in cold blood. Everyone was running helter-skelter. Our bulls broke free of the yoke in panic.

“My family (took shelter) in the village mosque. My grandmother who refused to leave was the only one in the house when I got there.”

When the sound of machine guns and bombing stopped, Ismail crawled out of his hiding place. The village had been flattened.

“Everything was in ruins. The air was full of dust. The big trees were uprooted and broken. I ran towards the mosque. Nothing was left of it. Three of my sisters, mother, grandfather, three of my uncle’s sons, three of their sisters and my uncle’s wife were martyred,” he recounts.

One sister and a cousin survived, he adds. “My sister’s leg had broken in three places. My uncle’s daughter had a wound in her neck. When we poured milk in her mouth she could not swallow. No one could be taken to hospital, but they survived. Now they are both married. They have children but they have never recovered. They suffer from depression and other mental problems,” he explains.

Four more villages were bombed that same day. Rumours of more attacks triggered an exodus. Ismail joined a group of villagers going to Achin, a southern district in Nangarhar. “It was winter. It was raining hard. I did not have even sandals on my feet. We reached the Achin area. We had not eaten any food. I was weeping loudly.”

No one knew why their village was bombed. Ismail wondered if it was because one of his uncles was a military officer in the Daud Khan government. Daud Khan was the first president of Afghanistan, from 1973 till his assassination in 1978.

“The Russians were bombing our villages based on incorrect information. We had nothing to do with politics. We were just farmers,” he asserts.

Ismail returned home two weeks later. His old grandmother had gone blind. His father had many bullet injuries in his shoulder. He says he went to the graveyard to mourn his family. “They were many new graves. I ran to the grave of my baby sister. People told me her body had been found in a well beside the mosque. I fainted with the news; people had to carry me back home,” he says.

The village was targeted again and again.

“At the mere sound of a plane we would run for our lives. I made a bunker for my grandmother and father. I used to hide them there,” he says. “One day the Russian aircrafts stopped visiting our village, and the mujahedin brought their war to us.”

Ismail left, like tens of thousands of Afghans, for Pakistan in search of a livelihood. He did all kinds of hard, manual work.

“I did not take my family. I was working as a daily wage labourer. Sometimes I would be a guard, other times I would push a wheelbarrow, and break stones. My hands would get cut and bruised. I would wrap them up in cloth,” he recalls without emotion.

Part of the money he earned was sent home. His father wanted him to rebuild the village mosque. He also renovated the family home where he now lives with his family along with his half-brother and family.

His old school in Shpole Baba was rebuilt. Now Ismail’s son studies there. “He is in seventh (grade). He always stands first. My brother says that even if we die of hunger we will make him finish his studies.”

**The testimonies of survivors of war crimes are our contribution to creating greater public awareness about people’s hopes and claims for justice, reconciliation and peace.  These testimonies and life stories are distributed internationally by IPS and are the basis for a radio drama that is being broadcast by seven Killid radios.