There’s Life in the AIDS Ribbon 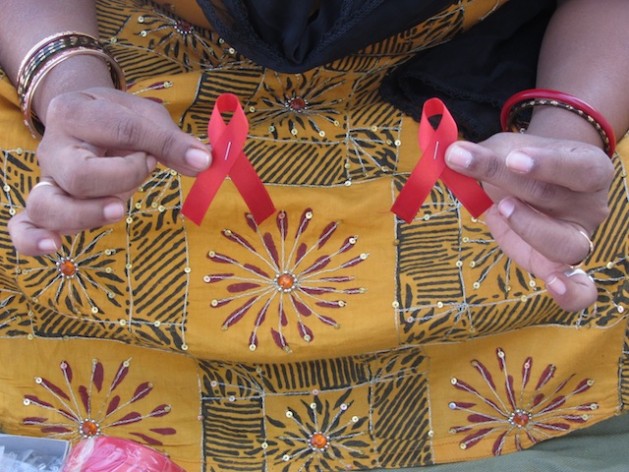 HYDERABAD, India, Dec 1 2012 (IPS) - Thirty-year old Swapna Raj of Hyderabad is a woman in a hurry: in time for the International AIDS day Swapna, a HIV positive person on anti-retroviral therapy (ART), has received a contract from the state government to deliver 5,000 red ribbons.

She bends over the bundles of red silk ribbon spread on a reed mat, swiftly cutting and stitching dozens of upside-down, teardrop-shaped loops, each of them two inches long. On AIDS day these shiny ribbons are being worn by thousands of government staff and social activists in a symbolic show of their fight against the deadly HIV/AIDS.

For Swapna, who has been living with HIV for past 11 years, these ribbons are more than a symbol; sold at a rupee (two cents) a piece, they are also an important source of sustenance.

“AIDS control in India is still largely limited to providing free counseling and ART,” says Swapna, founder and former president of People Living with HIV (PLHIV) in the southern Indian city Hyderabad – a network of HIV positive men and women with 2,00,000 members.

“But most of the HIV infected or affected people in the state (of Andhra Pradesh), especially women, are ostracised by society, thrown out of their homes and have no way to support themselves financially. So, besides counseling and medication, what they also need is a way to earn a living.”

Swapna’s belief arises from her own decade-long personal struggle to survive as a HIV positive person. At the age of 20, she was infected by her husband. Following her husband’s death two years later, Swapna was on her own, fending for herself and her toddler son. A counseling job in an NGO gave her the chance to interact with thousands of HIV positive people across the state, and she gained deep insight into challenges and possible solutions.

The main challenge, she said, was that every woman feared her health would deteriorate to a point when she could not travel out of her home to take up a job.

In 2007, Swapna formed the PLHIV network in Hyderabad and started to train HIV positive women in making candles and Christmas trees, beads and paper lanterns, in embroidery, making flower bouquets and garlands and above all, stitching clothes, banners and ribbons.

Nillamma Marakka, a 47-year-old HIV positive woman was a commercial sex worker who migrated from the coastal district West Godavari to Hyderabad in 1999. Three years back her failing health forced her out of sex work, pushing her close to starvation.

In 2011, Nilamma joined the PHLIV network and received training in tailoring for three months. Today, she has a comfortable life stitching ribbons of different colours, each symbolising a fight of a certain kind – red (AIDS), purple (domestic violence) pink (breast cancer), orange (leukemia) and white (peace).

Nilamma says demand for red ribbons is the highest. Government departments, NGOs, political parties and churches buy thousands of red ribbons around AIDS day, which is observed with growing enthusiasm in the state. According to the National Aids Control Mission, Andhra Pradesh has a quarter of India’s 2.4 million HIV positive patients.

“For every thousand ribbons, I spend about 250 rupees (five dollars) on buying silk ribbon, thread and safety pins. So, I can save at least 3,000 rupees (60 dollars) out of every order of 5,000 ribbons. Since these are bought directly by the customers, there is no need to pay a middleman. These are indeed ribbons of life.”

“The programme ran from 2007 to 2012, during which we found that 42 percent of the HIV affected families in the state were headed by women. Of them, nearly half were above 50, unable to work for hours together or travel outside their homes.

“The best way to support them was to build ‘soft skills’ like making candles, stitching blouses and banners and making ribbons. As an initial investment, each woman was given 8,000 rupees (160 dollars) by the government.” The programme, he says trained 56,000 people.

Encouraged by the success of Bal Sahyoga and NHPLIV, positive women networks in other states of India have started to promote ribbon making as an alternative livelihood. Muthu Kani, a 29-year-old HIV positive woman in Chennai says that making ribbons has not only helped her earn a living, but also overcome to recurring suicidal thoughts.

“In 2006 when I first learned that I was HIV positive I wanted to kill myself. I felt very helpless and didn’t how to take care of myself or my two children – one of whom was also HIV positive. Four years ago I met some people from the Positive Women Network who trained me in basic accounting, screen printing, embroidery, and red ribbon making.

“Of all these, I find screen printing and ribbon making the least physically exhausting. I get orders all through the year and can earn about 6,000-8000 rupees each month. I feel confident of my own abilities now. I have HIV, but I can still live like a normal person,” she says with a smile. (End)