ABU DHABI, Jan 15 2013 (IPS), Jan 15 2013 (IPS) - Boasting a yellow two-person convertible run on hydrogen gas and free bottles of Tokyo tap water, the Japanese pavilion at the Water and Energy Summit in Abu Dhabi seemed to pull the most crowds. It was also a sign of the growing interest of Japanese companies in the United Arab Emirates’ capital city, a promising emerging market.

While electric, solar, and hybrid vehicles have been around for some time, Masayuki Murakami of the Osaka Sangyo University explained to TerraViva that this eco-friendly hydrogen cell fuel car runs at 80 kilometres per hour and can travel a good 200 kilometres before it has to be refuelled. 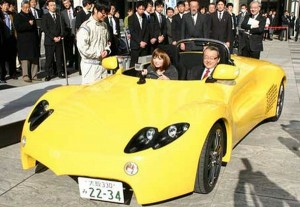 The car had a license plate showing it was ready to hit the road and was built as part of Osaka Sangyo University’s ongoing research into hydrogen fuel cells as a potential power source for future generations of automobiles. The students assembled the car in their spare time using parts they bought on the open market.

Just across from the yellow sports car was a stall set up by the Tokyo Metropolitan Waterworks Bureau, where the Japanese were happily giving away bottled water. But instead of purified mineral water, it was simple tap water from Tokyo.

“We are making a point that our tap water is safe and good tasting,” said one official, bringing home the point that about 800 million people across the world are unable to obtain safe drinking water.

A stall that attracted less attention but which proposed practical and sustainable solutions for today’s energy and security needs was the one run by Tedashi Yagai. He was showcasing photo-luminescent sign plates which radiate for more than 10 hours during night time, he said — without electricity. These can be used variously, including for disaster prevention equipment and city sign boards, while saving electricity or making up for a lack thereof.