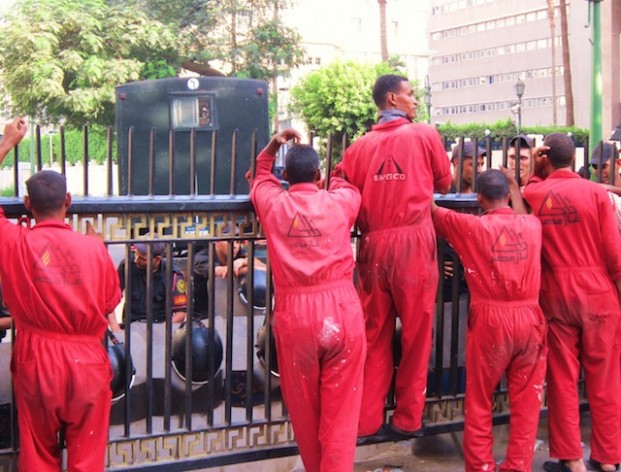 CAIRO, Jan 24 2013 (IPS) - Workers played a pivotal role in the mass uprising that led to former Egyptian president Hosni Mubarak’s downfall. Now, two years on, the same labour movement that helped topple the Arab dictator is locked in a stalemate with the government and employers over long-denied labour rights and untenable working conditions.

In recent months, thousands of disenfranchised workers across Egypt have taken collective action to secure better wages and working conditions, paralysing sectors of an economy still recovering from the 2011 uprising. The country’s new Islamist-led government has promised to resolve labour disputes quickly and equitably, but faces formidable challenges as it grapples with restive workers, unyielding employers, and depleted state coffers.

The Muslim Brotherhood, the conservative Islamic movement that dominated last year’s parliamentary and presidential polls, ran on a platform that emphasised social justice. Yet the once-outlawed group has a poor track record on worker rights, and a history of anti-union activities.

“We had a revolution but the only change is from (Mubarak’s) National Democratic Party to the Muslim Brotherhood,” says labour activist Kareem El-Beheiry. “The Brotherhood has never done anything for the labour movement, and never supported workers or independent unions.”

President Mohamed Morsi, a former Brotherhood leader, has faced a number of tests since taking office last June. There were over 2,000 labour protests in 2012, with the rate of protests more than doubling during the second half of the year, according to a new study by the Egyptian Centre for Economic and Social Rights (ECESR).

“We cannot but notice the clear failure of Morsi’s administration to resolve these protests or even set a clear plan for dealing with their demands. Rather, the administration has continued to adopt the same old policies, which only aggravates the matter,” the ECESR report said.

Labour Minister Khaled El-Azhary, a prominent Brotherhood member, has repeatedly urged striking workers to return to work while the government considers their demands. He says Egypt’s fragile economy cannot afford any more loss of production and must be given a chance to recover from the 2011 revolution.

Egypt is struggling to plug deficits in the state budget and balance of payments as it burns through its last remaining foreign reserves. Tourism, a key foreign revenue earner, plummeted after the uprising and is still off by 20 percent. Foreign investment has retreated, and many projects remain on hold due to ongoing political and economic uncertainty.

While the government has generally tried to avoid confrontations with striking workers, it has taken a tough stand on those who “obstruct the wheels of production.” In the months following Morsi’s appointment, riot police broke up labour protests and arrested local strike organisers, while public sector employees found engaging in collective actions were fired, transferred or referred to disciplinary hearings.

“More than 200 employees and workers were individually sacked during the first three months of Morsi’s term, and more than 100 others were subjected to investigation after they were arrested while peacefully protesting…In addition, many employees and workers were physically assaulted during their sit-ins by thugs hired by (their) employers and businessmen,” the ECESR report said.

“The Muslim Brotherhood views strikes as undermining the economy and Morsi’s rule,” she says. “Rather than addressing workers’ demands, it has tried to turn public opinion against striking workers by using the press to portray them as traitors and thugs.”

And where that fails, she adds, the same “lies and false accusations of worker sabotage” are fed to sympathetic courts.

At least a dozen workers have been convicted under legislation passed by Egypt’s military-run transitional government in March 2011 that criminalises “economically disruptive” strikes. President Morsi has yet to strike down the controversial law or overturn the sentences, though he has the power to do so.

Meanwhile, the government is formulating new legislation that labour activists fear will restrict freedom of association and re-establish the state’s dominance over syndical activities. An early draft of the Trade Union Liberties Law, intended to replace antiquated and restrictive legislation on union organisation, would have enshrined the right to strike and legally recognised the hundreds of independent unions that have sprung up since Mubarak’s fall.

The draft law was scrapped, however, in favour of a new bill drawn up by labour minister Khaled El-Azhary and other prominent Brotherhood figures. Their version proposes stiff penalties for striking workers who disrupt production. It also curtails union pluralism by requiring each enterprise to select just one trade union to represent its workers.

The bill would complement “anti-union” articles in Egypt’s new constitution, which was passed last month in a highly divisive referendum. Article 52 affirms the right of workers to form syndicates, but another article stipulates that each profession can have only one trade union.

The new legal framework threatens to eliminate many of the more than 1,000 independent trade unions that exist alongside their larger and more established state-controlled counterparts.

That’s the point, says Hassan. “The Muslim Brotherhood only wants unions it can control.” [END]