ABU DHABI, Jan 17 2013 (IPS) - Among the 30,000 or so delegates who had come to attend the World Future Energy Summit and the first International Water Summit being held in Abu Dhabi Jan. 15-17 – including global leaders in politics, policy, technology and business – was Wendy 2.0, who had journeyed all the way from New York. 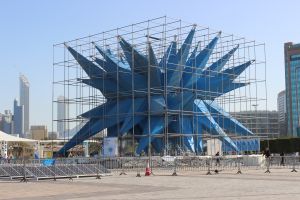 But unlike the rest, who remained in intense discourse on ways to shape the future of renewable energy, she lazed at the seashore all day long, by Abu Dhabi’s famous Corniche, stretching her giant blue arms, soaking up the sun, and letting the world pass by, literally.

Guest of the Sheikha Salama Bint Hamdan Al Nahyan Foundation and Masdar, Abu Dhabi’s renewable energy company, for the Abu Dhabi Sustainability Week, Wendy 2.0 is an installation that will be on display till Feb. 6.

But it’s not just a peculiar installation. Some would say it’s a perfect example of art mixing with science.

Designed by Matthias Hollwich and Marc Kushner from the New York-based architecture and design firm HWKN, this 56-foot tall pavilion with its futuristic monument cleans the air around it – the equivalent of taking 260 cars off the road at any given time. Constructed of locally-sourced scaffolding, the material used is recyclable.

When sunlight strikes the blue fabric, sprayed by titania nanoparticles, a host of very complicated chemical reactions breaks down pollutants that then stick on the pavilion’s surface. When it rains, these pollutants are washed away without sending any adverse remnant into the environment.

Wendy made its first appearance in New York City as the winner of the 2012 MoMA PS1 Young Architects Programme, where it was previously on display during the summer Warm-Up concert series. The structure wooed the people with antics such as turning on jets of shooting water and energising misters.

“It looks like you put the model on a Xerox and then blew it up,” said architects Kushner and Hollwich, while describing the structure as “a storm pushing at the boundaries of architecture.”

Having come of age, in a manner of speaking, Wendy is now independent. It does not need the grid to power its fans, misters and lights like it did in New York. Here in Abu Dhabi, it is powered by solar energy, thanks to Masdar.