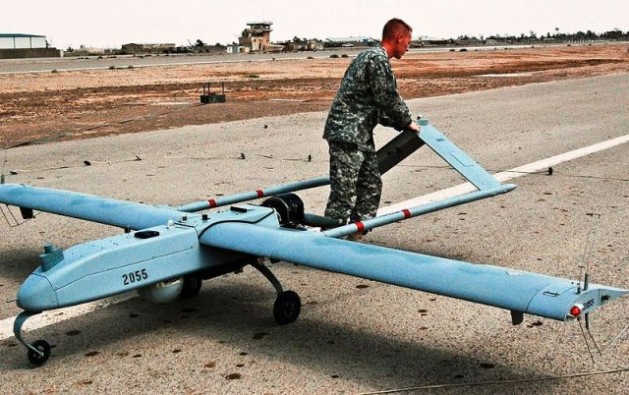 The RQ-7B Shadow 200 tactical UAV is wheeled off the runway after a reconnaissance mission in Iraq Aug. 11, 2008. Credit: U.S. military/public domain

UNITED NATIONS, Feb 7 2013 (IPS) - The “drone”, one of the eminently controversial lethal weapons deployed by the United States in its war against terrorism, is obviously a dirty word in the U.N. lexicon.

So when Under-Secretary-General for Peacekeeping Operations Herve Ladsous was asked about U.N. plans to use drones in the Democratic Republic of Congo (DRC), he demurred.

“I would not use the word drones,” he told reporters Wednesday, opting for a military euphemism: “unmanned aerial vehicles” (UAVs).

Ladsous said the United Nations plans to use “unarmed UAVs” only for surveillance purposes – but with the express permission of the government of DRC and neighbouring countries.

“We will see how this experiment works,” he said, adding that the United Nations will be “open” to sharing whatever intelligence it gathers with regional bodies in Africa, besides U.N. force commanders on the ground.

The “green light” for the use of unarmed drones in DRC – a country battling a violent insurgency – was given by the 15-member Security Council last November, and is aimed at monitoring the movement of armed groups by the 17,500-strong U.N. Organisation Stabilisation Mission in DRC (MONUSCO).

But some U.N. diplomats fear that U.N. drones may eventually be armed, if and when the conflict in DRC takes a turn for the worse.

The drones used by the United States are fully armed and have resulted in the killings of both suspected terrorists and civilians in countries such as Afghanistan, Pakistan, Somalia, and Yemen.

According to published reports, more than 40 countries either deploy or manufacture drones.

Larry Dickerson, defence systems analyst at Forecast International, a U.S. defence marketing research firm, told IPS that besides the United States, there is a very long list of countries manufacturing these UAVs.

Ben Emmerson, a British lawyer and U.N. special rapporteur for human rights and counterterrorism, is in the process of preparing an investigative report on the use of drones.

He is focusing on 25 drone strikes, specifically in Afghanistan, Pakistan, Yemen, Somalia, and the Palestinian territories (by Israeli drones), where these attacks have reportedly resulted in civilian deaths.

The report is expected to be presented to the General Assembly next October or November.

Secretary-General Ban Ki-moon has already expressed “concern” on the use of armed drones for targeted killings, “as it raises questions about compliance with the fundamental principle of distinction between combatants and non-combatants.”

He said the secretary-general has asked relevant member states to be transparent about the circumstances in which drones are used, and the means by which they ensure that attacks involving drones comply with international law.

According to Amnesty International, there have been more than 300 drone strikes in Pakistan alone over the last few years, which have killed both civilians as well as suspected militants.

Responding to a report that the administration of President Barack Obama was finalising guidelines for “targeted killings” by drones, Susan Lee, Amnesty’s Americas programme director, said bluntly: “There already exists a rulebook for these issues: it is called international law.”

Any policy on so-called targeted killings by the U.S. government, she said, should not only be fully disclosed, but must comply with international law.

To date, the justifications publicly offered by senior Obama administration officials have shown only that U.S. government policy appears to permit extrajudicial executions in violation of international law, Lee added.

Asked how far behind are China and Russia in deploying drones in conflict situations, Dickerson told IPS that both countries are increasing their UAV inventories, “but remain far behind the United States in terms of numbers fielded and the sophistication of these systems.”

“Neither have the battlefield experience in the operation of UAVs that the U.S. military gained over the last 10 years,” he said.

Dickerson also said that the United States has the largest market share and produces more UAVs than any other country in the world.