This is the first of a two-part report on environmental and political issues over the proposal to feed the Dead Sea with water from the Red Sea. 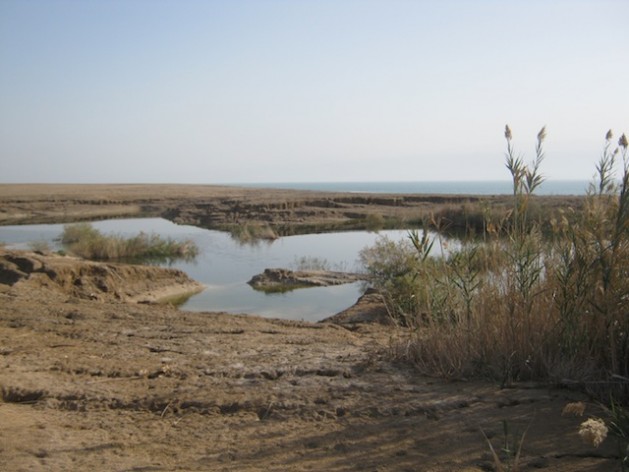 Sinkholes like this are slowly swallowing the Dead Sea. Credit: Pierre Klochendler/IPS.

EIN GEDI, Israel, Feb 25 2013 (IPS) - The World Bank has declared the Red Sea-Dead Sea canal project feasible. Designed to “save the Dead Sea”, “desalinate water and/or generate hydroelectricity at affordable prices in Jordan, Israel and the Palestinian Authority”, and “build a symbol of peace in the Middle East”, the scheme, green groups warn, is fraught with environmental hazards.

Currently at 426m below sea level, the Dead Sea, Earth’s lowest elevation on land, is drying and dying in the desert by roughly 1.1 metres a year. Its surface area has shrunk by a third during the last 50 years from 960 square kilometres to 620 square kilometres.

Set along the Great Rift Valley between the biblical Moab plateau and Judaean desert, the hyper-saline desert lake borders Jordan to the east, Israel and the nascent Palestinian state to the west.

As the world’s most buoyant lake, the Sea is a natural spa. Its minerals have been extracted for treatment of skin diseases since the times of Cleopatra. Today, the chemicals industry is a multibillion dollar operation, with the Israeli Dead Sea Works and the Jordanian Arab Potash Company exploiting the water as raw material.

Add to that a changing climate and the Sea is an ever receding horizon trapped in a man-induced dead zone. Route 90 used to wind its way along it. Now the shore is over a kilometre away.

Bared mudflats have thus caved in without warning, and led to the formation of over 3,000 sinkholes which slowly swallow land, roads, buildings; posing a significant hazard to agricultural, industrial, and touristic infrastructures.

No wonder then that the three waterside neighbours failed last year to have the Dead Sea crowned as one of the Seven Wonders of Nature, and the probability of having the Dead Sea listed as a World Heritage Site is a sinking dream.

“We don’t want the Dead Sea to die; we want to revive it,” Israel’s minister for regional development Silvan Shalom tells IPS. “That’s our main goal – to bring more water to an arid region. The best option is a canal to pump 2 cubic billion metres a year from the Red Sea.”

What could save the Dead Sea from death foretold is a 180-km development project called the ‘Red Sea-Dead Sea Water Conveyance’.

This is how it would work: marine water would be pumped from the Red Sea. A pipeline conveyance system with six pipes and a tunnel would then flow the water by gravity, exploiting the difference in elevation at and below sea level, to a high-level desalination plant and two hydroelectric plants.

The high-salinity brine reject would be discharged to the Dead Sea to halt and, eventually, reverse its decline.

After a decade-long argument, the World Bank released a series of studies last month which deem the proposed ‘Red-Dead Canal’ (as the ambitious scheme is dubbed) technically, environmentally and socio-economically feasible.

The main objectives would thus be fulfilled, the World Bank assesses. All that for a total capital cost of 9.97 billion dollars, the World Bank estimates; half of it amortised by selling desalinated water and hydroelectricity, the other half financed out of international aid to development – “a win-win situation,” hails Shalom.

“The mixing of the Red Sea marine water with the unique brine of the Dead Sea is likely to lead to gypsum (a sedimentary deposit) excretions, to red algae bloom and will slime the water’s purity. The two bodies of water won’t mix, like oil and water. The Red Sea water will float on top.”

Indeed, World Bank experts note that massive intakes of Red Sea water might durably whiten the otherwise royal blue colour of the Dead Sea, but that “this problem could be mitigated by adding gypsum crystals at the discharge location allowing a faster sedimentation of the precipitated gypsum.”

Another concern lies with contamination of groundwater resulting from potential leakage of seawater while operating the pipeline conveyance system along the Arava Valley, an area classified as a “highly active seismic zone”.

“Pipes could explode in the midst of an earthquake, and we’d see millions of cubic metres of water polluting groundwater,” Bromberg tells IPS.

The World Bank suggests special arrangements like concrete boxes enclosing the pipes, isolation valves, and wave joints. A control system will close the valves in case of seismic stress on the pipes.

Addressing the fear that the pumping station might impact on the Red Sea coral reef, a modelling study commissioned by the Word Bank recommends that the intake be located at a depth of at least 140 metres. “The deeper the intake the less likely will be the impact.”

“There were many hearings and these redundant arguments were rejected by the World Bank. Green groups don’t want the project no matter what, that’s the bottom line,” says Shalom.

Prior to issuing a final report, the World Bank is currently holding a last series of hearings in Israel, Palestine and Jordan.

If the project is endorsed by the World Bank, intergovernmental negotiations will decide on how best to proceed. “There’ll be a need to obtain finances, from our respective governments, from the World Bank itself, or from the private sector,” Shalom clarifies.

“Then, tenders will be issued, contracts awarded for the design, procurement and construction of the canal. This should be discussed between the parties.”

The World Bank’s forecast is that the canal could be built within six years and start operating in 2020, reaching its maturity stage by 2060.