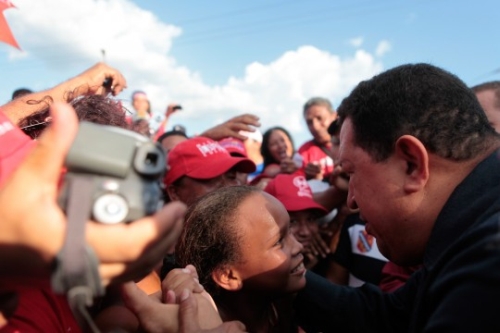 CARACAS, Mar 6 2013 (IPS) - Venezuelan President Hugo Chávez died Tuesday in the Military Hospital of Caracas after a long battle with cancer in his abdominal region, which was diagnosed in June 2011.

Born on Jul. 28, 1954 in Sabaneta, a small town in Venezuela’s southwestern plains, Chávez was the second of the six sons born to rural schoolteachers Hugo de los Reyes Chávez and Elena Frías.

Raised mainly by his grandmother, the young Hugo was passionately devoted to baseball. At the age of 17, after graduating from high school, he entered the Military Academy.

As a lieutenant in the army, he founded the Revolutionary Bolivarian Movement-200, a political and social movement, in 1982, influenced by his older brother Adán, an active member of the Venezuelan Revolution Party headed by guerrilla leader Douglas Bravo.

Chávez first made history on Feb. 4, 1992, when he surrendered after leading a failed uprising by several army battalions against then president Carlos Andrés Pérez (1974-1979 and 1989-1993).

Wearing combat fatigues and a red paratrooper’s beret and walking calmly among the jittery officers who arrested him, he gave an improvised 70-second speech addressing his fellow troops involved in the uprising, which had an immediate impact on millions of Venezuelans watching the live TV coverage.

“Lamentably, for now, our objectives were not achieved…But the country has to take the road to a better destiny, and I assume responsibility…for this Bolivarian movement,” he said, calling for his companions to lay down their arms to avoid further bloodshed.

Instead of blood, ink ran, as analysts discussed how, in a country where millions of people were marginalised from the oil economy and where leaders who acknowledged the shortcomings of the political system were lacking, a young army officer had assumed responsibility for the attempted coup in the name of a movement that invoked independence hero Simón Bolívar (1783-1830).

Chávez’s legend was thus born, and his popularity began to grow. After spending two years in prison he was pardoned by then president Rafael Caldera (1969-1974 and 1994-1999) of COPEI, Venezuela’s Christian Democratic party, and began to travel the country raising hopes of a new uprising.

But in 1996, on the advice of veteran left-wing politicians like Luis Miquilena, his political mentor, he decided to seek power at the polls.

Chávez founded the Fifth Republic Movement (MVR), which grew and grew while the traditional parties that had ruled since 1959 went into decline. He won the Dec. 6, 1998 presidential elections with 56 percent of the vote.

In 15 other elections held between 1999 and 2012, the proportion of voters who backed Chávez and his supporters remained fairly steady at that level. From the start, his main voting base was made up of the poor.

The hope of the poor

To the economic, social and cultural reasons that explain this support were added “the hope of justice that lives always in the depths of the soul of the poor,” as well as Chávez’s charisma, former socialist leader Teodoro Petkoff told IPS.

People of “mestizo” or mixed-race heritage identified easily with Chávez, who looked like them. Other aspects of his charismatic personality were a casual, accessible approach, a powerful stage presence and commanding voice, and a speaking style that at times had a trace of the preacher. His speeches were splattered with references to Bolívar and to the independence and land reform struggles of the 19th century.

Since taking power, he made 2,200 nationwide broadcasts and nearly 400 editions of his Sunday show “Aló Presidente”, where he discussed political questions, aspects of his military career, or history, largely unscripted and for several hours, in colloquial language.

Chávez supported left-wing causes and governments throughout Latin America and the Caribbean, had a close alliance with Cuba, and described Fidel Castro as his mentor.

He had the constitution rewritten and approved by voters in 1999 and amended in 2009.

In 2001, land laws aimed at redistributing unused rural property unleashed a backlash from the moneyed classes and prompted constant protest marches by Venezuelans calling for him to step down.

On Apr. 11, 2002, the largest opposition march to date ended with gunfire near the house of government that claimed the lives of 19 people and left many more injured – an incident that was never clarified.

The military high command, backed by powerful civilian elites, staged a coup against Chávez, and Pedro Carmona, the head of Fedecámaras – the main business association – was declared president and immediately dissolved most of Venezuela’s democratic institutions, including Congress.

Chávez's legacy to Venezuela was putting the issue of poverty at the top of the social and political agenda; taking the left to power after nearly a century of frustrated attempts; a certain desacralisation of power; and strengthening groups and communities that had been on the margins for decades.

In Latin America, Chávez leaves a discourse and a web of relations that vigorously support integration, which in his view had to be political, even more than economic, and support for friendly countries and governments based on oil.

He pulled Venezuela out of the Andean Community bloc (Bolivia, Colombia, Ecuador and Peru) and brought it into the Southern Common Market, or Mercosur (Argentina, Brazil, Paraguay and Uruguay); he created Petrocaribe to provide oil aid to Caribbean countries; and he was instrumental in creating the Union of South American Nations (UNASUR), the Community of Latin American and Caribbean States (CELAC), the Bolivarian Alliance for the Peoples of Our America (ALBA), the Bank of the South and an incipient regional currency.

But loyal members of the military, along with tens of thousands of supporters who surrounded the government palace and military institutions in Caracas, put Chávez back in power less than 48 hours after he was ousted.

In late 2002 and early 2003, a lockout by top management of the PDVSA oil company and by private firms aimed at toppling Chávez caused extensive damage to the economy. But the two-month business shutdown failed and the country’s democratic institutions remained stable.

In August 2004, the opposition organised a recall referendum asking Venezuelans whether Chávez should leave office immediately. But 59 percent of voters said he should continue to govern, in a transparent vote overseen by the Organisation of American States and the Carter Centre, among other observers.

With support from Cuba, the Chávez administration introduced a broad range of social programmes, known as “missions”, bringing healthcare, dental care, education, subsidised food, literacy programmes and direct financial aid to the poor, along with employment and housing plans, outside of the traditional bureaucratic channels.

After his re-election in December 2006, the president stepped up his verbal and diplomatic confrontation with the United States, forged closer ties with countries outside the region like Russia, China and Iran, broke off relations with Israel, and declared that his aim was “21st century socialism”.

Chávez invariably defined himself as Bolivarian, to the point that he officially named the country the Bolivarian Republic of Venezuela, and used the term in the names of his works and proposals. But he also described himself as Christian, humanist, Marxist, socialist, anti-imperialist, pro-indigenous and pro-worker.

The high price of oil, which accounts for 40 percent of Venezuela’s budget revenue, made it possible for him to nationalise a number of companies and place the economy under tight controls, starting with exchange controls. But he failed to curb the heavy dependence on the importation of foodstuffs or Venezuelans’ rampant consumerism.

After a new constitutional reform was voted down in 2007 by a narrow majority, he had to wait until 2009 to push through the possibility of indefinite re-election for the presidency and other posts.

Long before, in a brief conversation with IPS in 2003, Chávez had said that he did not want to govern forever, “just for two terms, until January 2013, and after that another revolutionary will do so.”

But he changed his mind later, arguing that he needed to stay in power in order to usher in the necessary changes, saying the constant shifts in administration in Latin America and the Caribbean had thwarted similar initiatives.

His effort to be elected to a fourth term apparently had an impact on his health. Doctors said it was extremely negative for him to dedicate himself to the government and the election campaign simultaneously in 2011 and 2012, while neglecting his health.

Only in extremis, after his health took a turn for the worse in December 2012, did he decide to name a chosen successor: Nicolás Maduro, his candidate to replace him in the presidency.

The first big question mark is whether his political heirs will inherit the leadership role and popular support he enjoyed for 20 years, 14 of them in the government.

Another question is whether “Chavismo” will give rise to a strong political movement, along the lines of Peronism in Argentina after the death of Juan Domingo Perón (1895-1974), or whether Chávez will become a cult figure for the left like Argentine-Cuban guerrilla Ernesto “Che” Guevara (1928-1967).

Chávez frequently said that when he reached old age he imagined himself retired, under the shade of a tree on the Venezuelan plains where he was born, teaching children, and perhaps cultivating one of his passions: the “copla” music of the plains region.

A born warrior, a “simple soldier” as he liked to say, with combat terms always on hand to explain any situation, who defeated almost all of his rivals, a true winner in politics, Chávez was unable to win the final battle against cancer that brought him down at the age of 58.