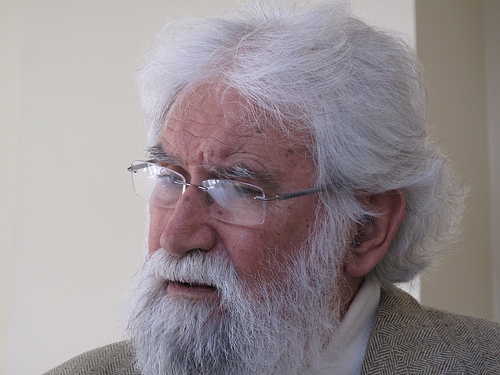 What is the interest of some groups in raising the question of Pope Francis’s past rather than discussing the serious crisis in the Church? asks Leonardo Boff. Credit: Daniela Pastrana/IPS

In this interview with IPS, Boff acknowledged that it was a “controversial issue,” and that there were contradictory accounts. But he said he believed prominent human rights defenders in Argentina who denied that Archbishop Jorge Bergoglio, elected pope by the Vatican, had any ties with Argentina’s military regime.

Boff, a key figure in liberation theology, which emerged in Latin America in the 1950s and 1960s with a focus on social justice and the poor, said he was looking towards the future with hope and that he was confident that Francis would honour his Jesuit faith and would take a “vigorous and radical” stance against the epidemic of paedophilia and corruption plaguing the Church.

Q: How do you interpret the “decentralisation” that the selection of a Latin American pope implies?

A: The central Church, that is, the Vatican and the European churches, felt humiliated and ashamed by the scandals created within their own walls. So they chose someone from outside, with a different approach and a different style of leading the Church.

Sixty percent of all priests live in the Third World. It was time for those churches to be heard better. They are no longer churches that mirror Europe but are now churches that are a source, with their own face and their own forms of organisation, generally in community networks.

For me, the name Francis is more than a name – it’s a reflection of a poor Church with close ties to the people, evangelical, a lover and protector of nature, which has been devastated. Saint Francis is the archetype of this kind of Church. Pope Francis is inaugurating a Church of the third millennium, far removed from the palaces and with a deep connection to people and their cultures.

Q: To what do you attribute the choice of Bergoglio, instead of Brazilian Cardinal Odilo Scherer?

A: Scherer was the candidate of the Vatican, where he worked and made a lot of friends. But he publicly defended the curia, and the Vatican Bank, which was criticised by many, including many cardinals. That unleashed a public debate, which hurt him. Besides, he would not have been good for the Church at this juncture. He is conservative and authoritarian. He would have been a Benedict XVII.

Q: In Argentina, the election of Bergoglio was criticised because of his supposed complicity in the abduction of two Jesuit priests during the dictatorship.

A: I know that in general the Argentine church was not very prophetic in denouncing state terrorism. Despite that, there were bishops like (Enrique) Angelleli, who died in a shady manner, (Jorge) Novak, (Jaime) De Nevares and Jerónimo Podestá, among others, who were openly critical.

But with regard to Bergoglio, I prefer to believe Adolfo Pérez Esquivel, a Nobel Peace Prize-winner, and a former member of the National Commission on the Disappearance of Persons (Graciela Fernández Meijide), who say that allegation is slanderous. They didn’t find a single mention of Bergoglio’s name on documents or legal accusations.

On the contrary, he saved many people by hiding them in the Colegio Máximo de San
Miguel (Argentina’s main Jesuit training centre). Besides, it runs against his known character – he is strong but also tender, and poor, and he continuously speaks out against social injustice in Argentina and for the need for justice, not philanthropy.

But in the end, what matters isn’t Bergoglio and his past, but Francis and his future.

Q: Why did you omit any reference to this issue in your initial remarks?

A: It’s a controversial issue and you have to be familiar with it. The versions are contradictory. I don’t talk about things that I am not fully clear about. And I have to wonder: what is the interest of some groups in raising this question rather than discussing the serious crisis in the Church…?

Perhaps – I’ll concede this much – he could have been more prophetic, like Bishop Hélder Câmara and Cardinal Paulo Evaristo Arns were in Brazil. But here, the state is secular and separate from the church. In Argentina, Catholicism is the state religion, which hindered but didn’t impede resistance and denunciations by the Church.

A: It isn’t a question of responding whether it is a sin or not…The question is political and for me it’s about what side the person is on – are they on the side of the poor, of those who suffer terrible inequalities? Or of the status quo that wants unlimited growth and a culture of consumption?

Bergoglio took the side of the victims and is constantly calling for social justice. If we don’t understand that, we are getting away from the main point.

Q: You attributed his choice of the name Francis to the “demoralisation” of a “Church in ruins” as a result of various scandals. How should that name be expressed in practice?

A: He has given signs of a different kind of papacy, without symbols of power or privileges. A pope who pays his own hotel bills, drives in a simple car to pray at the basilica of Santa Maria Maggiore, and secretly visits his friend, Cardinal Jorge Mejía, who is ill in Rome…these are gestures that the people understand.

I am sure that with regard to the paedophiles and the financial crimes, he will be more Jesuit than Franciscan, vigorous and radical, because things cannot go on the way they are now in the Church.

Q: The new pope believed he saw the hand of the devil in questions like the decriminalisation of abortion and the legalisation of homosexual marriage in Argentina, and he has confronted the government because of this. Should we expect a pope who is more or equally conservative on these questions of doctrine?

A: These questions are banned by the Vatican. No one could distance himself from the official position. I hope that Francis, as pope, will start a lengthy discussion of all of these issues, because they are a part of the real life of the people and of the new culture that is emerging, especially the question of celibacy and sexual morality.

That doesn’t mean the Church has to renounce its most deeply-held positions, but that it should debate things within a context of democracy, and should respect what is decided in a democratic fashion. The good thing about democracy is that it impedes top-down decisions from being imposed and allows different opinions to be heard, even if they do not win out in the end.