BOOKS: A History of the Search for Justice in the Middle East 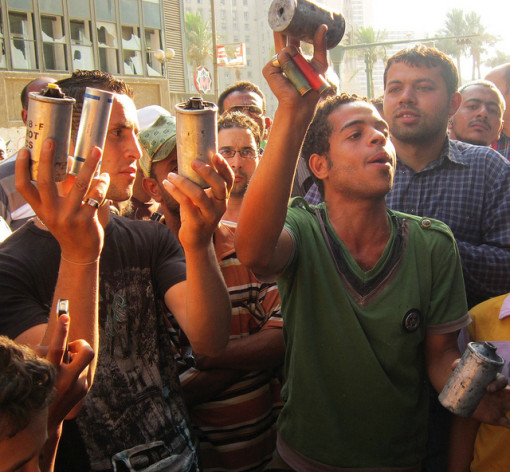 WASHINGTON, Apr 24 2013 (IPS) - It’s no wonder that Egypt has floundered in its efforts to create a more democratic system from the ruins of the Mubarak regime.

A sweeping new history of Middle Eastern political activists shows that the search for justice has deep roots in the region but has often been thwarted by the intervention of foreign powers.

The Arab Spring revolts of 2011 were “both improbable and long in the making,” writes Elizabeth Thompson in her book, “Justice Interrupted: The Struggle for Constitutional Government in the Middle East.”

The young people who massed in Tahrir Square and overturned the U.S.-backed Mubarak dictatorship were the heirs of Col. Ahmad Urabi, whose peasant army was crushed in 1882 by British troops. The beneficiaries of 2011 so far, however, are the heirs of Hassan al-Banna, the founder of the Muslim Brotherhood, whose concept of “justice” appears to restrict the rights of women, religious minorities and secular groups.

On Tuesday, President Mohamed Morsi’s own legal adviser resigned to protest a law that would force the retirement of more than 3,000 judges – Mubarak appointees that have sought to blunt the rising influence of Islamist politicians such as Morsi. The United States, while criticising human rights abuses under the new regime, appears to be placing a higher priority on Egypt maintaining its peace treaty with Israel.

If, as President Barack Obama likes to say – quoting Martin Luther King – “the arc of history bends toward justice” – in the Middle East, that arc has been exceedingly long.

The breakup of the Ottoman Empire after World War I interrupted movements for constitutional government and tainted liberalism by association with Western colonialism. Military autocrats, nationalists and Islamic groups took their place.

Thompson, a professor of Middle Eastern history at the University of Virginia, structures her book by compiling mini-biographies of strivers for justice beginning with an early Ottoman bureaucrat, Mustafa Ali, who wrote a critique of corruption in Egypt, and ending with Wael Ghonim.

Ghonim, a Google executive, created a Facebook page devoted to a young Egyptian beaten to death in 2010 by police that attracted 300,000 followers – many of whom later gathered in Tahrir Square.

Others profiled in the book include Halide Edib, known as Turkey’s “Joan of Arc,” who first supported, then opposed Kemal Ataturk’s dictatorship; Yusuf Salman Yusuf or “Comrade Fahd,” whose Iraqi Communist Party was the largest and most inclusive political movement in modern Iraqi history; and Ali Shariati, the Iranian Islamic Socialist whose ideals were hijacked by the clerical regime after the 1979 revolution.

At a book launch Tuesday at the Woodrow Wilson International Center for Scholars, Thompson was asked by IPS if her book was largely a “history of losers” and whether there was any way to break the dismal cycle of one step forward, two steps back toward effective, representative government in the Middle East.

She compared recent revolts in the region to the 1848 revolutions in Europe that failed at the time but were key precursors of democratic movements to follow.

“You have to think long term,” she said. The optimistic interpretation of the Arab Spring is that it has led to “a fundamental shift in the political culture that will bear fruit decades later.”

She conceded that the current picture in Egypt is not a happy one.

Women, who in 2011 figured prominently in the overthrow of Mubarak, are now afraid to go to Tahrir Square for fear of being molested by thugs. Morsi, the president who hails from the Muslim Brotherhood, “is in a defensive posture,” Thompson said, “playing to the Salafist right.” Meanwhile, “the poor and the Copts are losing out.”

However, the Egyptian press has never been so free and Middle Easterners in general are more exposed to information than at any time in their history, she said. “People are not sealed off like they were in Syria in 1989” when state-run media omitted news that the Berlin Wall had fallen, she said.

Still, time and again in the last 150 years, the desire for security and independence from foreign powers has trumped liberal conceptions of human rights.

What if France had permitted Syria to retain an independent constitutional monarchy under King Feisal after World War I? French troops instead occupied the country under an internationally blessed mandate that lasted until after World War II.

What if Akram al-Hourani, leader of the Arab Socialist Party in Syria after independence, had not agreed to union with Gamal Abdel Nasser’s Egypt in 1958? Nasser proceeded to outlaw Syrian political parties and in 1963, the Baath party staged a coup and installed a regime that is fighting for its existence today.

The book also sheds light on important figures such as the Palestinian Salah Khalaf, Yasser Arafat’s number two who was known as Abu Iyad. Assassinated in 1991 by the rejectionist Abu Nidal faction, Iyad had made the transition from terrorist mastermind to supporter of the two-state solution for Israel and Palestine. Arafat, who used to rely on Khalaf’s advice, might have steered his movement more wisely in his later years if he had not lost Abu Iyad as well as PLO military commander, Abu Jihad, who was killed by Israelis in 1988.

If, as Thompson concludes, the Arab Spring “has reprised the struggle interrupted by the World Wars and the Cold War,” it is a struggle that is still far from being won.