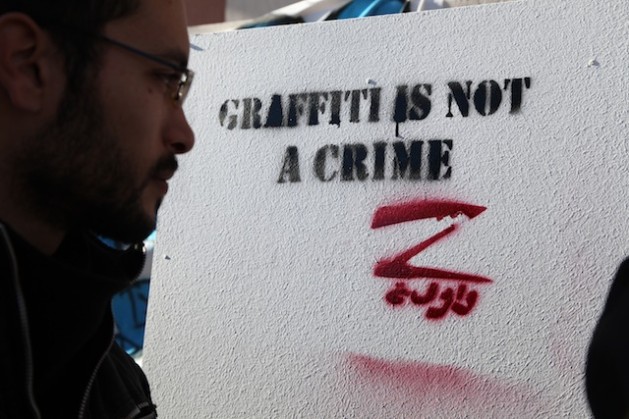 A call for freedom in Tunis. Credit: Lassad Ben Achour/IPS.

TUNIS, Apr 14 2013 (IPS) - Ela, a young Tunisian woman whose face is barely visible behind her niqab, says she has spent five months protesting a university ban against the religious garment in the classroom “to no avail”. On the other side of the capital Tunis, a group of students decked out in djellabas and keffiyehs (traditional Tunisian costumes) with the Tunisian flag wrapped around their shoulders, perform the Harlem Shake: a dance form that originated in the United States in the early 1980s but has recently gone viral online as a popular meme.

The two scenes represent the latest battle in Tunisia, between ultra-religious Salafists and staunchly secular Tunisians who say the rise of Islamists after the fall of dictator Zine El Abidine Ben Ali in January 2011 represents an erosion of the gains made during the revolution.

Ela, clad from head to toe in black, represents the conservatives’ desire for reverence and conformity, while the “protest dancers” symbolise the new generation that was born out of the uprising, a vivid, colourful and diverse mix of people who say culture has become the new frontline in the ongoing fight for democracy in post-revolutionary Tunisia.

“Dancing is not only a non-violent protest, the body is itself an expression of liberation and of well-being."
Recently, the rap singer who goes by the name ‘Weld el 15’ was condemned to two years in prison in retaliation for his song Boulicia Kleb (meaning “policeman are dogs”), which was viewed over 650,000 times on YouTube. The music video’s director and lead actress each received six-month sentences.

“The police often use the law against drugs to arrest singers, in particular rap singers, because of the use of marijuana,” Adnen Meddeb, a young film-maker who shot the revolution from inside Tunisia, tells IPS.

Oussama Bouajila and Chahine Berriche, two graffiti artists from the group Zwelwa (meaning “the poor”) were arrested on Nov. 3, 2012 for the mural they painted on the walls of the industrial city of Gabes, entitled, “The people want rights for the poor”. Their verdict was released on Apr. 10: each was charged a 50-dollar fine for “defacing government property” and ordered to clean the walls.

Zwela has denounced the artists’ trial as a “political trial, which reminds us of the methods used under Ben Ali.”

The Ministry of Interior has emerged as one of the most common sites of cultural resistance where, every Wednesday, a group of activists stage a sit-in to protest the Feb. 6 assassination of Chokri Belaïd, leader of the leftist Popular Front opposition coalition. 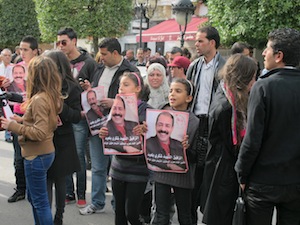 “Every Wednesday we sit here to force the ministry to answer the question: ‘Who killed Belaïd?’,” Amor Ghadamsi, painter and general secretary of the Tunisian Artists Trade Union, tells IPS.

He says the assassination was the “gravest incident in a climate of mounting violence, and it shocked the country. Before this, people did not realise the extent of the danger they faced. Now we want the Tunisian authorities to investigate and find the perpetrators,” he stressed.

The artists took up this weekly demonstration after a statue they produced to honour Belaïd’s death, erected outside the slain leaders’ home, was destroyed by the Salafists. “Culture is our resistance now,” Ghadamsi said, referring to the widespread use of graffiti, and the proliferation of political rap with lyrics that honour the revolution.

The choice to hold the protest outside a government building symbolises a growing distrust with the ruling Ennahda Party, which contested – and won – the country’s first free elections in October 2011 on a moderate, secular platform.

But the group has come under fire for allowing religious extremists to operate with impunity.

One of these extremist groups is the League for the Protection of the Revolution (LPR), an association that is widely believed to have close ties to the  government and has been involved in many confrontations with opposition parties and activists with the Union General Tunisienne du Travail (UGTT), the country’s leading trade union.

LPR members claimed responsibility for the fatal beating of Lotfi Nakbou, a leader of the Nida Tounes party in the southern Tunisian city of Tataouine in October 2012, and for the destruction of the statue of Belaid.

“These people work in the name of Ennahda. They are people from Ennahda, close to Ennahdha, former convicts hired by Ennahda, and people whose consciences Ennahda has bought,” Jilani Hammami, spokesperson of the Workers’ Party, insisted in an interview with Tunisia Live back in January.

Though the government has dismissed the claim, locals here point out that the LPR are never persecuted for their criminal actions. The UGTT has called repeatedly for the dissolution of the LPR to no avail.

With the government turning a blind eye to violence, scores of Tunisians feel they have no choice but to turn to immaginative, creative and non-violent protests.

Their staunch ally during the revolution, the Internet has resurfaced as a crucial tool in the cultural war, which activists say began in earnest on Mar. 25, 2012 when Salafist gangs attacked artists celebrating World Theatre Day on Bourguiba Avenue in central Tunis. Witnesses to that scene told IPS the police either assisted the mobs, or simply stood by.

Dances like the Harlem Shake and other cultural protest videos quickly go viral, sometimes even attracting the attention of the mainstream media.

Meanwhile young Tunisians have repeatedly “occupied” Bourguiba Avenue to commemorate the clashes that sparked this wave of cultural resistance, halting traffic by sitting in the middle of the street to read books in an act of defiance against state security forces.

In the same vein, a group calling itself Art Solution initiated the “I will dance in spite of everything” movement. Directed by Bahri ben Yahmed, the dancers perform in every possible public space they can claim: in front of the national theatre, in the Belvedere gardens, in Kasbah Square, but also in the poor outskirts of Tunis.

Often, on-lookers and passersby join the dancers, creating the feeling of the kind of spontaneous protests that were familiar sights during the early days of the revolt.

“Dancing is not only a non-violent protest, the body is itself an expression of liberation and of well-being,” commented the writer Jamila Ben Mustapha.