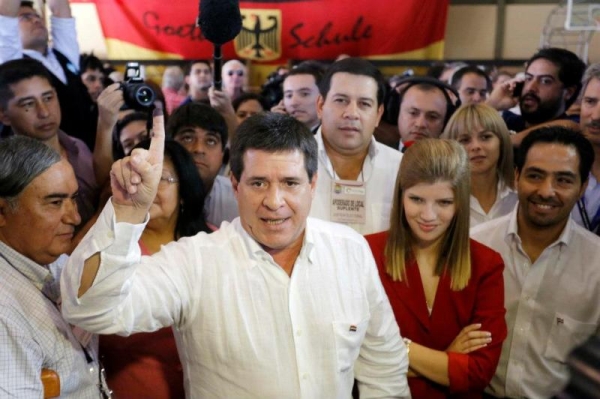 ASUNCION, Apr 22 2013 (IPS) - Paraguay’s right-wing Colorado Party, which ruled the country for 60 years until 2008, will return to power under President-elect Horacio Cartes, who won Sunday’s presidential elections by a wide margin.

Cartes, a tobacco magnate who is new to politics, took 45.8 percent of the vote, compared to 36.9 percent for Senator Efraín Alegre of the Authentic Radical Liberal Party.

Television host Mario Ferreiro of the centre-left alliance Avanza País garnered 5.5 percent of the vote, and Aníbal Carrillo of the Guasú Front, a coalition of leftist and centre-left political and social organisations led by former president Fernando Lugo, won 3.48 percent.

By the times Cartes takes office on Aug. 15, Paraguay hopes that the Southern Common Market (Mercosur) and the Union of South American Nations (UNASUR) will have lifted their sanctions. The two blocs suspended Paraguay after Lugo was ousted by Congress on Jun. 22, 2012.

Lugo, a leftist former Roman Catholic bishop who was known as the “bishop of the poor”, defeated the Colorado Party in 2008. The party had been in power for six decades, including the period of the dictatorship of Alfredo Stroessner (1954-1989).

In 2012, the legislature removed Lugo from office after a swift impeachment trial widely criticised as a “summary trial.”

“These elections in one way or another put the final touch to the Jun. 22 coup, because they legalise at the polls a change of government programme that took place in a violent fashion,” columnist Miguel López, of the daily newspaper Última Hora, told IPS.

Argentine President Cristina Fernández phoned Cartes to congratulate him, and tweeted “We hope to see you in Mercosur.”

Lugo and two other candidates running for the Guasu Front were elected to the Senate.

Analysts say the former president, his two fellow Guasu Front senators-elect, and Ferreiro – also elected to the Senate – could make up a small centre-left bloc that would put up resistance to the neoliberal agenda of Cartes and his party, which holds a majority in Congress.

Observers and the international press reported that votes were widely bought by the Colorados and Liberals.

“I feel ashamed of those young people who today, while I lined up to cast my vote, publicly offered theirs for a little bit of cash,” Alejandra Gómez, a young woman in the working-class neighbourhood of Obrero in Asunción, told IPS after voting. “Added to the shame are sadness and a feeling of impotence.”

In a speech at his campaign quarters in the Santa Teresa neighbourhood, one of the most exclusive districts in the capital, Cartes said “Believe me that it’s possible; no one is going to take away our dream of better days. Let’s not get used to it being normal for our young people to look for work in other countries; we want them to be workers in our country.”

A crowd of his supporters celebrated the Colorado Party’s return to power. “All Paraguayans have won; the party has won, but the republic has also won. My commitment is to every person, to make a country for everyone…I will put my efforts into winning the trust of all Paraguayans,” said Cartes, 56, one of the country’s wealthiest people.

The president-elect reiterated his commitment to fight poverty and extreme poverty, which affect 38 and 20 percent of the population, respectively.

“It will be difficult, tough and difficult, but we will overcome it once all Paraguayans understand that we have to work together. We are going to get back on path, after getting off-track, to take a new direction that we all want,” he said.

When the results of the exit polls started to be released just an hour after voting began, the first predictions of Cartes’ victory were already being made.

The pollsters “are companies hired by the media – there you have the interests and views of the media, which are imposed on viewers and listeners who are waiting for information,” Aníbal Orue Pozzo, author of the book “Medios, candidatos y propuestas en las elecciones presidenciales paraguayas: Sobre discursos y construcciones narrativas” (Media, candidates and campaign promises in Paraguay’s presidential elections), to be launched this week, told IPS.

Two violent incidents were reported Sunday in the northern province of Concepción, attributed to the Paraguayan People’s Army, a small leftist guerrilla group.

One policeman was killed and two were seriously injured when their patrol car was hit by an explosion in the town of Azotey. Earlier, unidentified armed men attacked a police station in Kurusú de Hierro, without causing any injuries.