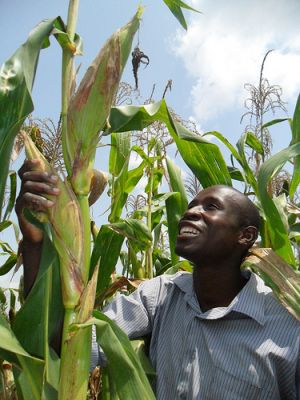 Kenyan farmer Isaac Ochieng Okwanyi enjoyed his most successful harvest ever after using lime to improve the quality of his soil. Credit: Isaiah Esipisu/IPS

Michael Hoevel, deputy director of a UK-based think tank called Agriculture for Impact, says that the MDGs have helped galvanise efforts to address the world’s most fundamental development challenges, including the eradication of extreme poverty and hunger.

“The [new] Sustainable Development Goals can move even further by setting clear metrics for how this can happen,” he says. “For instance, we should be promoting ‘sustainable intensification’ into these goals – looking at metrics such as agricultural productivity and rural incomes on the one hand and GHG [greenhouse gas] emissions and resource use per unit of output on the other hand.”

Andrew Emmott of Twin, a UK-based fair trade group that works with more than 50 farmer organisations, notes that food safety is not a feature of the MDGs, despite presenting significant barriers to achieving Goal Four on reducing child mortality and Goal Six on combating diseases.

“There is a danger that the Sustainable Development Goals may not tackle the global food safety challenge but focus on a less defined interpretation of food security and nutrition,” Emmott says. “Nutrition interventions, seen as some of the most cost-effective, are undermined by not addressing food safety as toxins such as aflatoxin are anti-nutritious, as well as harmful to health.”

According to the U.N. Food and Agriculture Organisation, malnutrition costs the global economy as much as five percent of global gross domestic product (GDP), equivalent to 3.5 trillion dollars annually or 500 dollars a person. Impact for Agriculture noted that over 200 million people go hungry and 40 percent of children under age five are stunted due to malnutrition in sub-Saharan Africa today.

“Twin believes that incorporating food safety into the food security and nutrition goals will create the impetus to develop novel finance mechanisms in post-harvest drying and storage for households and communities as well as formal value chains,” Emmott says, explaining that this approach should seek to improve food safety, reduce food waste, support local food systems and make food more readily available for longer periods over the year.

“This will reduce the need to increase food production, and should result in less people becoming malnourished, as well as improving public health through better food safety.”

Hoevel and Emmott agree that in structuring the new goals, the development of markets for smallholder farmers is essential.

“Creating more connected and inclusive markets will be key here,” Hoevel said. “Innovative approaches should be tested and refined over time, as long as safety nets are in place for the farmers involved.”

Two recent reports by Agriculture for Impact highlight how smallholder farmers can be supported to access input and output markets more effectively. When scaling up investments or development programmes, it is essential to adapt them to the local context, both in terms of agroecological conditions and socioeconomic realities.

According to Hoevel, the lion’s share of future market-based opportunities for smallholders lies in domestic and regional markets. Smallholders can also access global export markets if they are supported with good agronomic and business advice, quality inputs and the ability to organise themselves to benefit from economies of scale.

Twin’s experience, Emmott told IPS, has shown that organisation is the key to accessing value-added markets for smallholder farmers.

“By forming cooperatives and working collectively, marginalised smallholders can gain support to develop their skills and increase their productivity at the farm level, as well as having strength through numbers,” said Emmott.

“Farmers who negotiate contracts and trade collectively not only get a better price than at the local market, they are less likely to be short-changed through faulty scales or exploited by unscrupulous loan sharks.”