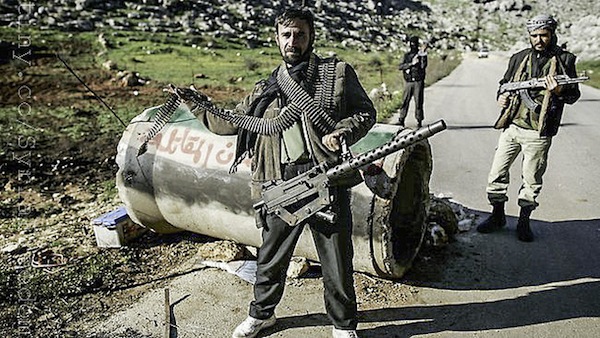 WASHINGTON, Jun 14 2013 (IPS) - Despite Thursday’s announcement that President Barack Obama has decided to provide direct military assistance to Syrian rebels, what precisely the administration has in mind remains unclear.

Analysts here are also questioning whether the decision is part of a deliberate strategy – and, if so, what that strategy is – or whether it is instead another in a series of efforts to relieve growing pressure from its allies in Europe and the Gulf and hawks at home to take stronger military measures designed to shift the 27-month-old civil war decisively in favour of the opposition.

“When Julius Caesar actually crossed the [Rubicon], he proceeded rapidly to mission accomplishment in accordance with a sound strategy,” noted retired Ambassador Frederic Hof, a Syria specialist at the Atlantic Council who has long called for stronger U.S. military intervention.

“Although the administration’s crossing [decision] is significant, welcome, and long overdue, it is far from certain whether this particular legion will move smartly toward an objective or simply mill around the river bank.”

The White House tied the decision to escalate the “scope and scale” of military aid to the Free Syrian Army (FSA) and the Syrian Military Council (SMC) to the U.S. intelligence community’s determination that the Syrian forces had used chemical weapons – albeit “on a small scale” – against rebel forces in multiple battles over the past year.

It also cited the deepening involvement of Iran and Hezbollah militants from Lebanon in support of the regime of President Bashar Al-Assad, whose departure from office Obama has repeatedly demanded since hostilities first broke out more than two years ago.

"It is far from certain whether this particular legion will move smartly toward an objective."
-- Frederic Hof

The announcement, however, followed a series of intensive internal meetings over the past two weeks, as it became clear that the regime’s forces had made a series of battlefield advances – most importantly by capturing, with Hezbollah’s help, the strategic western town of Al-Qusayr close to the Lebanese border – that threatened to tip the war decisively in Assad’s favour.

With pro-government forces and Hezbollah fighters reportedly preparing a major assaults on the key city of Aleppo and other “moderate” opposition leaders appealing desperately for weapons, the administration has found itself under pressure from both its allies abroad and hawks here to “do something” that could halt, if not reverse, the regime’s momentum and restore the “strategic stalemate” that Washington considers essential to any prospect for a political settlement.

But what precisely that “something” is or will be remains unclear. In a briefing for reporters Thursday evening, deputy national security adviser Ben Rhodes repeatedly avoided answering the question, insisting, however, that Washington will increase “the scope and scale” of direct aid to the SMC which so far has received mainly humanitarian and “non-lethal” assistance.

According to various published reports, Obama has indeed decided to provide small arms and ammunition but still pending are decisions on rebel requests for anti-tank weapons and shoulder-fired surface-to-air missiles. Washington had previously ruled out the latter, in part due to Israel’s concerns that they could be used against its aircraft, particularly if they fall into the hands of radical Islamist factions among the anti-Assad forces.

But hawks here have argued that small arms and even anti-tank weapons are at this point insufficient to redress the rapidly tilting balance of power on the ground.

“The president must rally an international coalition to take military actions to degrade Assad’s ability to use airpower and ballistic missiles and to move and resupply his forces around the battlefield by air,” declared Congress’s most visible interventionists, Republican Senators John McCain and Lindsay Graham late Thursday. “We must take more decisive actions now to turn the tide of the conflict in Syria.”

They and others have called for Washington to create “no-fly zones” along Syria’s Turkish and Jordanian borders that would both safe havens for refugees and rebels and permit the latter to be trained, armed and supplied for operations against government forces inside Syria.

Hof has urged that such a zone also be used protect a rebel government that could gain formal recognition from the United States and other allies, request heavier weapons and eventually go to peace talks as diplomatic, as well as military, equals of the Assad government.

While Rhodes told reporters that Obama has “not made any decision to pursue a military operations such as a no-fly zone”, the Wall Street Journal reported Thursday that a Pentagon proposal still under consideration calls for a limited “no-fighting” zone extending up to 40 kilometres inside Syria that would be enforced by U.S. and allied aircraft operating from Jordanian airspace.

In recent months, Washington has set up Patriot air-defence batteries and sent fighter jets to bases inside Jordan, where it has also been secretly training rebel and Jordanian forces on securing chemical-weapons facilities and weapons in the event the Assad regime collapses, according to some reports.

Some analysts who have opposed escalating U.S. involvement in the civil war agree that directly supplying arms to the rebels would be unlikely to turn the military tide, certainly in the short term, and could carry additional risks.

“Selective arms shipments could [spur] clashes between rival rebel groups. Extremist elements might attack more moderate rebel units receiving better arms, driven by need, resentment or both,” according to Wayne White, the former deputy director of the State Department intelligence unit on the Near East, who noted that this could actually strengthen the regime. Indeed, he added, the “rebel military vanguard” for some time has been the “radical Islamist in character – even Al-Qaeda affiliated”.

He also expressed scepticism about the effectiveness of a no-fly zone, noting that it would risk swift escalation. “The rebels would remain at the mercy of the regime’s other heavy weapons on the ground, thus tempting those establishing any sort of no-fly zone to attack regime ground targets as well.”

“The first step on the slippery slope is always easy, but it’s much harder to actually resolve a conflict or to find a way out of a quagmire,” wrote Marc Lynch, a Middle East expert at George Washington University, on the eve of the White House announcement.

For Lynch, who has long urged Obama to resist calls to escalate Washington’s intervention, the key issue is what U.S. policy ultimately aims to achieve and whether providing military aid or taking more aggressive measures will help achieve them.

“Should Syria be viewed as a front in a broad regional cold war against Iran and its allies or as a humanitarian catastrophe that must be resolved?” he asked, noting that very different strategies should be followed depending on the answer to that question.

At the moment, according to Lynch, “advocates of arming the rebels switch between making the case that it would strike a blow against the Iranians (and Hezbollah) and that it would improve the prospects for a negotiated solution.”

While the White House clearly framed its decision this week in the latter terms, it may nonetheless add momentum to those who tend to view the Syrian conflict more as part of the larger conflict against Tehran the model for which, according to Lynch, “would presumably be the jihad against the Soviet occupation of Afghanistan – a long-term insurgency coordinated through neighbouring countries, fuelled by Gulf money, and popularised by Islamist and sectarian propaganda”.