WASHINGTON, Jun 8 2013 (IPS) - With Syrian government forces and their allies scoring a major victory over Western- and Gulf Arab-backed rebel forces this week, neo-conservatives and other anti-Damascus hawks are trying hard to turn up the pressure on President Barack Obama to sharply escalate U.S. support for the opposition. 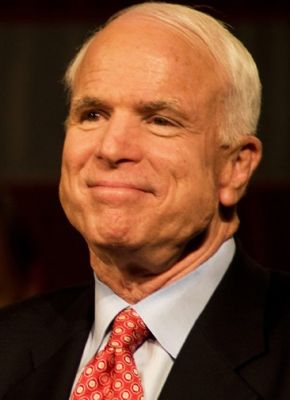 Sen. John McCain has been the most outspoken Congressional proponent of military action in Syria. Credit: Dan Raustadt/cc by 2.0

But their appeals appear increasingly to be falling on deaf ears, not only in a White House which has long been reluctant to intervene in yet another Muslim country, but also on an electorate that, according to the latest polling, is turning increasingly non-, if not anti-, interventionist, particularly regarding the Middle East.

Indeed, according to a New York Times/CBS News poll released Friday, only 28 percent of respondents said they believe that Washington has a “responsibility to do something about the fighting in Syria”, while 61 percent rejected that notion.

Similarly, a Wall Street Journal/NBC News poll released Wednesday found that only 15 percent of respondents said they favoured taking military action, or providing arms directly to the rebels (11 percent) – the latter, an option the administration has said it has been actively considering for two months.

Another 42 percent said they preferred to confine U.S. involvement to humanitarian assistance (of which the U.S. has been made the main financier), while 24 percent favoured no action at all.

In what was billed as a major policy address at the Brookings Institution Thursday, Republican Sen. John McCain, who, along fellow-Republican Lindsay Graham, has been the most outspoken Congressional proponent of military action, vented his frustration with both Obama and the public.

“I’ve puzzled for nights figuring out why it is the president will not act more decisively in the face of the events that are taking place,” he said, warning that “the entire Middle East is now up for grabs, and our enemies are fully committed to winning.

“What is more disturbing, however, is how little most Americans seem to care,” said McCain, who last week became the highest-ranking elected official to visit rebel-held territory.

“Most are weary of war and eager to focus on domestic issues. But some hold a more cynical view: they see the Middle East as a hopeless quagmire of ancient hatreds, and a huge distraction from worthier priorities…”

He spoke amidst confirmation that the strategic rebel-held border town of Al-Qusayr, which sits at a critical crossroads connecting Damascus with Lebanon’s Bekaa Valley, Syria’s Mediterranean coast, and points further north, including Aleppo, had fallen to the Syrian army and hundreds of Lebanese Hezbollah fighters who joined the fight in April.

Analysts in the region described the government victory, the most important of a series of recent regime advances around Damascus, near the Golan region, and along the main highway to Jordan, as primarily tactical, but one that could signal a tipping point in the war.

“For the past six months, the two sides have been in a situation of dynamic equilibrium,” Yesid Sayigh, a Syria expert at the Carnegie Middle East Center in Beirut, said this week at a briefing organised by the Carnegie Endowment for International Peace (CEIP). “We may be entering a phase in which the equilibrium will tip …and in the regime’s favour.

“Between now and the end of the year, we could see the armed opposition in complete disarray,” he said, noting that the Syrian National Coalition (SNC) was “on the verge of collapse” while its Western and Arab League backers, the “Friends of Syria”, are “clearly getting cold feet” about increasing their support.

While the White House insisted that the situation was not so dire, increasingly exasperated hawks, who have long favoured strong U.S. military intervention short of putting “boots on the ground”, described it in more apocalyptic — and global — terms.

Insisting that Iranian-backed Hezbollah’s intervention in the battle for Al-Qusayr was decisive to the outcome, the Washington Post’s hard-line neo-conservative columnist Charles Krauthammer called the battle “a huge victory not just for Tehran but also for Moscow,” Assad’s biggest arms supplier.

The losers, he said, included Turkey, Jordan, Washington’s Gulf allies, as well as the U.S. itself “whose bystander president” failed to take measures long favoured by the hawks, including “arming the rebels, helping Turkey maintain a safe zone in northern Syria, grounding Assad’s murderous air force by attacking airfields – all the way up to enforcing a no-fly zone by destroying the regime’s air-defense system”.

According to Krauthammer, Obama also failed to “understand that if America is completely hands-off, it invites hostile outside intervention.”

Similarly, Thomas Donnelly of the American Enterprise Institute (AEI), which played a key role in the march to war in Iraq and also championed the U.S. intervention in Libya, depicted Obama’s failure to provide critical support to the rebels as a potentially catastrophic abdication of Washington’s historic role of “keep(ing) the worst from happening in the Middle East.”

“It would be rash to draw too many conclusions from a fight over a town of just 30,000 residents,” he wrote in the neo-conservative Weekly Standard, “but the specter that looms is nothing less than the near-complete collapse of the U.S. position in the Middle East.”

Indeed, many independent analysts are increasingly concerned that the spill-over effects and internationalisation of Syria’s civil war risk further destabilising the entire Levant, including Iraq.

However, they also fail to see how any U.S. military action, short of invasion and occupation, can make a decisive and beneficial difference, particularly given the disunity within rebel ranks and the important presence among them of radical Islamist groups that are at least as hostile to the U.S. and Israel as Iran and Hezbollah, if not more so.

Even many of McCain’s fellow Republicans, including the chairman of the House Foreign Affairs Committee, appear leery of any military involvement, including providing “lethal” assistance to the rebels (in addition to the “non-lethal” aid, such as body armour and night-vision goggles, already being provided offered by the administration).

A measure of the dismay felt by McCain and some other hawks is their praise for Obama’s most recent appointments – U.N. Amb. Susan Rice as his new national security adviser and Samantha Power to replace Rice at the U.N.

Long considered humanitarian interventionists, both Rice and Power, who served as a top National Security Council (NSC) official during Obama’s first term, were reported to have played key roles, along with Hillary Clinton, in persuading the president to intervene in Libya, the most oft-cited precedent McCain and others have cited for any Syria intervention.

“I want to work with them,” McCain said Thursday.

But even if they lean in McCain’s direction, they would face an uphill fight given the current political mood, as described by Michael Hirsh in the latest edition of The National Journal, entitled “The New Isolationism.”

Not only has there been “virtually a reversal of direction” in the public from the “neo-conservative strain of a decade ago,” according to Hirsh, but “(t)he idea of ‘humanitarian intervention that dominated policy debates before 9/11 has become, for the Obama team, the ‘notion that we shouldn’t just do things to make us feel better,’ in the words of one administration official.”