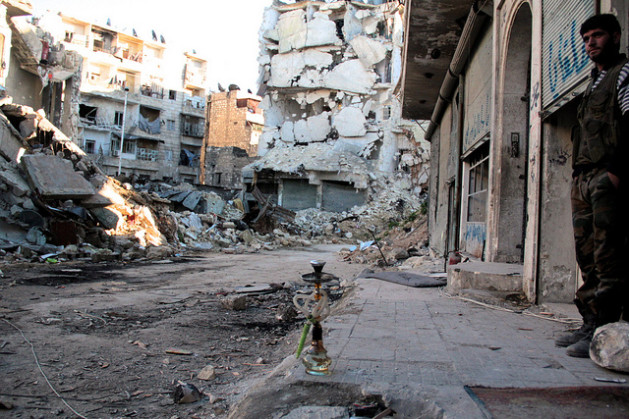 In Aleppo, Karm al Jabal. This neighbourhood is next to Al Bab and has been under siege for six months. Credit: Foreign and Commonwealth Office/cc by 2.0

WASHINGTON, Jun 1 2013 (IPS) - A series of reversals for Syria’s rebels this month has prompted its supporters here to call for much greater U.S. military intervention in the civil war in order to give them a stronger bargaining position in advance of any peace negotiations.

In particular, some opposition advocates here are calling for President Barack Obama to go beyond providing arms directly to selected rebel groups, an option that the administration has reportedly had under active consideration since reports surfaced last month that the Syrian army had used chemical weapons against rebels.

“A no-fly zone has mission creep written all over it." – Joshua Landis

Given the current weakness of the opposition, they argue, it makes little sense to go into negotiations next month in Geneva with representatives of the government of President Bashar al-Assad – as proposed by both Washington and Moscow – without first trying to decisively turn the tide of battle.

“(T)he only hope for an acceptable political settlement in Syria lies in an intervention that would decisively shift the balance of Syria’s war – through arms supplies to the rebels and airstrikes to eliminate the regime’s air power” (emphasis added), declared the lead editorial in the Washington Post Friday.

“If Mr. Obama is unwilling to take such steps, he ought also to eschew diplomacy that makes his administration appear foolish as well as weak,” the Post’s hawkish editorial board wrote.

Many of the rebels’ advocates here are urging the creation of one or more “no-fly zones” over Syrian territory to protect the opposition and permit it to set up a rival government on Syrian territory that could then request additional military intervention by its Western and Arab allies.

“Such a government would be entitled to request assistance in its defence from those who recognise it,” according to Frederic Hof, a former State Department special adviser on Syria at the Atlantic Council, who spoke earlier this week as part of a panel that favoured strong U.S. military intervention at the U.S. Institute of Peace (USIP).

“The United States and others would be entitled to offer defensive assistance to counter the (Bashar Al-) Assad insurgency and its foreign fighters.”

“This scenario would not preclude national unity negotiations between the new Syrian government and an entity in Damascus still recognised by Russia, Iran, and others,” according to Hof.

Hof’s proposal, as well as other options, came amidst a series of military, diplomatic and political reversals suffered by the opposition that have resulted in the perception that the Assad government – with critical help from key foreign backers, notably Russia, Iran, and Lebanon’s Hezbollah — has regained the offensive in the two-year-old civil war.

Hezbollah’s involvement in the fighting in and around the border town of Qusayr has enabled the government to secure key arms smuggling routes in and out of Lebanon and to re-open supply lines between Damascus and the Mediterranean coast, as well as northern provinces along the Turkish border, notably Latakia, Idlib and Aleppo.

Citing Germany’s chief intelligence officer, Charles Dunne, who heads Middle East programmes at Freedom House, wrote on CNN’s website that recent government advances on the ground meant that Assad’s rule “is more stable than any time in the last two years, and he is likely to retake the southern half of the country by the end of this year.”

Meanwhile, disarray in the opposition ranks was on vivid display during a meeting of the National Coalition for Syrian Revolutionary and Opposition Forces in Istanbul this past week as Islamist and secular factions battled over control and representation at any Geneva peace conference, to the evident exasperation of their backers in the West and Gulf states.

That disarray was increasingly reflected in Syria itself as four of the leading rebel groups on the ground sharply criticised the continuing discord in Istanbul amidst reports of increased tension and actual fighting between units of the Free Syria Army and Islamist groups, including the Al-Qaeda-linked Jabhat al-Nusra, filtered out of northern Syria.

While Britain and France managed to persuade the EU to lift its embargo on supplying arms to the rebels effective Aug. 1, Russia countered by announcing that it will proceed with the transfer to Damascus of its S-300 long-range surface-to-air missile system – widely considered one of the most potent anti-aircraft missile systems in the world.

While deployment of the system is unlikely before next year – assuming Moscow follows through with the transfer despite Israeli threats to destroy it on delivery – Russia’s announcement underlined its determination to trump any escalation of Western support for the rebels.

Moreover, the addition of S-300s to Syria’s already formidable air-defence system would make the implementation of a no-fly zone or similar action requiring U.S. and Western airpower that much more problematic, thus adding urgency to whether or not to intervene as urged by Hof and others.

The administration has so far confined its support to the rebels to humanitarian aid and “non-lethal” assistance – even while it has encouraged the Gulf states and Western Europe to provide arms directly – and has shown little enthusiasm for escalating its military involvement, to say the least.

When reports surfaced last week that it was indeed considering a no-fly zone, the Pentagon was quick to deny them, even while insisting that it is prepared for all contingencies.

At the USIP conference, Joseph Holliday, a fellow at the Institute for the Study of War, a spin-off of the neo-conservative American Enterprise Institute (AEI), presented four options for implementing a no-fly zone, ranging from supplying rebels with advanced surface-to-air missiles to a direct U.S. air attack on Syria’s air-defense system, aircraft, and related infrastructure followed by U.S. and allied air patrols over parts of the country.

But whether these ideas can be sold to the administration or to a war-weary public – for which there is virtually no appetite for providing anything more than arms to the rebels, according to recent polls — there is far from a consensus on the no-fly zone.

“A no-fly zone has mission creep written all over it,” according to Joshua Landis, a Syria expert at the University of Oklahoma and publisher of the syriacomment.com blog “It does nothing to guarantee that the opposition would win, and it certainly doesn’t guarantee that the ‘moderate’ opposition would get the jump on the Islamists and al-Qaeda, who are better positioned to exploit an Assad defeat, should it come.”

Wayne White, a former senior Middle East State Department intelligence analyst, agreed that, as in Libya, a no-fly zone would likely expand into something more, particularly “with the rebels on the defensive and losing ground…”

Indeed, he said, “another argument against (a no-fly zone) now could be that regime forces are doing so well on the ground that they might be able to continue making gains against the rebels without air support – relying instead on tanks, other armoured vehicles, heavy artillery, and heavy mortar fire.”

The result, he said, would likely result in “aerial interdiction against all manner of regime military targets on the ground, making it an even more demanding affair.”