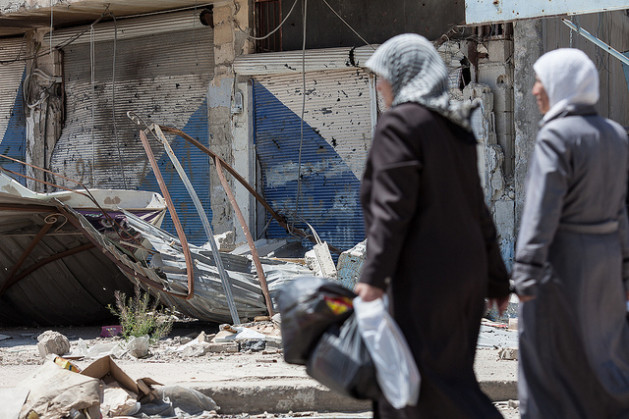 DOHA, May 30 2013 - Syria’s opposition will not participate in proposed international peace talks in Geneva next month, their leader has said.

George Sabra, the head of the Syrian National Coalition (SNC), on Thursday said the opposition were suspending their participation until the international community intervened to end the siege in Qusayr, a town in Homs province near the Lebanese border.

“The National Coalition will not take part in any international conference or any such efforts so long as the militias of Iran and Hezbollah continue their invasion of Syria,” Sabra told reporters in Istanbul.

Khaled Saleh, the SNC spokesperson who addressed the news conference after Sabra, said civilians in the town had been “severely wounded” and Qusayr had been completely cut off by forces loyal to President Bashar al-Assad.

“Civilians have no access to water, electricity and the massacre continues minute by minute while the Assad regime continues to use weapons” it receives from allies, he said.

He said the United Nations and Arab League should intervene to stop the killings that the Lebanese group “Hezbollah is responsible for”.

The planned peace talks in Geneva are being arranged by Russia – a Syria ally – and the United States. The SNC had said earlier it would take part only if a peace process that led to Bashar al-Assad stepping down was put in place.

SNC’s announcement to boycott the talks came only hours after Assad said his country would respond to any Israeli attack on its soil.

In an interview to be aired on Thursday by Al-Manar TV station, owned by Hezbollah, Assad also said he had already received the first shipment of an advanced S-300 Russian missile system and would soon get the rest.

Gerald Steinburg, a professor of Political Studies at Bar-ilan University, told Al Jazeera that Israel was paying attention “closely” to what was happening in Syria. The comments were first published on Thursday by the Lebanese newspaper al-Akhbar, which got excerpts of the interview.

“Syria has received the first shipment of Russian anti-aircraft S-300 rockets,” al-Akhbar quoted Assad as saying. “The rest of the shipment will arrive soon.”

Israel has suggested its military might strike the Russian S-300 missiles.

But he said Israel was not alarmed by shipments of arms to Syria.

“Mr Assad has got problems dealing with his own survival and that of his regime, so it is not really a major concern in Israel,” he said from Jerusalem.

Several foreign envoys had participated in the Istanbul meeting to help the opposition arrive at a decision.

U.N. Secretary-General Ban Ki-moon said major powers also remained divided on who would take part in the talks or when they would be held.

Ban told reporters “active consultations” were still being held, while Susan Rice, the U.S. ambassador to the U.N., said the U.S. government’s “entire foreign policy apparatus” was working to hold the meeting.

The U.S. has also called on Hezbollah to withdraw its fighters from Syria immediately.

France says about 3,000 to 4,000 Hezbollah fighters are currently battling alongside regime troops in Syria.