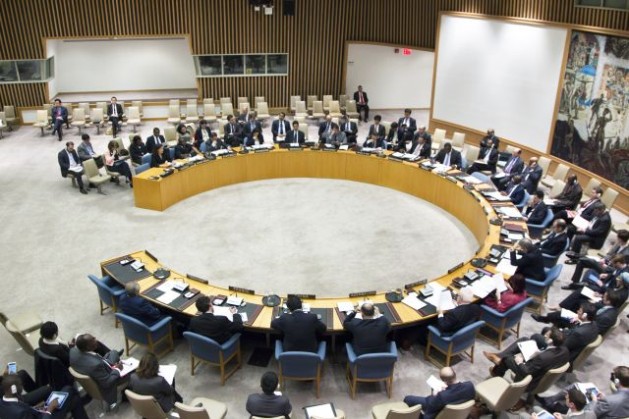 Critics argue that the silence of the Security Council constitutes an international green light to Israel to continue with its new policy and military aggression against Syria. Credit: UN Photo/Rick Bajornas

UNITED NATIONS, May 10 2013 (IPS) - Israel, which has launched three air strikes inside Syria since January this year, has escaped scrutiny or condemnation by a Security Council which remains sharply divided.

The continued air attacks have escalated tensions in the region and threatened a wider regional conflagration, according to reports from the Middle East.

It appears that the Syrian regime has become an even bigger international pariah than Israel." -- Prof. Stephen Zunes

Mouin Rabbani, co-editor of the Arab Studies Journal Jadaliyya, told IPS the Anglo-American reaction has been “the political equivalent of a standing ovation, though it remains unclear whether Washington and London’s public approval of Israeli aggression was in this case the result of a coordinated strategy or merely a Pavlovian response.”

He said the consequence has been – as it so often is in the Arab-Israel conflict – that the institutions charged with preserving international peace and security, first and foremost the U.N. Security Council, are once again caught with their pants down.

“And they have been prevented by Washington from formulating an effective response,” he added.

Matthew Russell Lee of Inner City Press, whose coverage of the United Nations includes a daily blow-by-blow account of Security Council activities, told IPS, “I’m not surprised they haven’t agreed on any statement.”

He said this happened after a car bombing by the opposition in Damascus, and when Russia proposed to condemn it, the U.S. (and other Western powers) wanted to add to the statement a condemnation of the government of President Bashar al-Assad.

“That would surely happen on any statement about Israel’s air attacks,” he said.

But no one has even requested a meeting of the type the Arab Group requested, and got, during Israel’s Operation Pillar of Defense aka Pillar of Cloud.

“I’d say that’s because the Arab Group, with the exception of Algeria and Iraq and the ‘dis-association’ of Lebanon, is seeking the transfer of power away from Assad,” Lee said.

The Arab Group, currently dominated by Gulf majority Sunni – or Sunni-ruled, like Bahrain – countries, had to write to the Security Council to have done at least as much as the 120-member Non-Aligned Movement (NAM) chaired by Iran.

“Actually, an Arab Group diplomat argued with me that while NAM only issued a statement, the Arab Group wrote to the Security Council and Ban Ki-moon: that’s the level of competition,” said Lee.

“But the Arab Group does not want a meeting in which Assad’s Syria would be portrayed as a victim,” he added.

Meanwhile, U.S. Secretary of State John Kerry and Russian Foreign Minister Sergey Lavrov have agreed to convene an international conference on Syria. But whether all of the warring parties would participate in such a meeting remains in doubt.

Rabbani told IPS the silence of the Security Council, for all practical purposes, constitutes an international green light to Israel to continue with its new policy and military aggression.

That Israeli Prime Minister Benjamin Netanyahu has, despite his unambiguous extremism, been less inclined to launch a major armed conflict than each of his predecessors, and is more susceptible to U.S. pressure, provides little solace, he added.

Having done this once and gotten away with it, his government and security establishment are almost certain to do so again, probably sooner rather than later, even while staring the potential Israeli disaster of war with Syria and/or Hezbollah – and perhaps a wider regional conflagration – straight in the face, said Rabbani, who is also a contributing editor to the Middle East Report.

Stephen Zunes, professor of politics and coordinator of Middle Eastern studies at the University of San Francisco, told IPS he cannot recall of any precedent of the Security Council remaining silent on air attacks on a sovereign country.

“But that doesn’t mean there aren’t any,” he said, pointing out that, “It appears that the Syrian regime has become an even bigger international pariah than Israel.”

Rabbani told IPS the Israeli explanation for its recent bombings of Damascus is that these were launched solely to prevent the transfer of advanced weaponry to Hezbollah in Lebanon and do not represent an Israeli intervention in the Syrian crisis. It is an explanation that is difficult to take seriously, he said.

Israel may indeed have acted to interdict weapons supplies to its foes in Lebanon. But more importantly, it acted to change its relationship with Syria and test the international response to this change of policy, he argued.

Specifically, said Rabbani, Israel was sending a clear message to the world’s capitals that henceforth it will act at will within Syria to promote its interests.

Resources and activities within sovereign Syrian territory previously considered immune from Israeli attack, such as military infrastructure and the transport of weapons systems to Lebanon, is no longer so.

In other words, Israel will henceforth retain the freedom to act, and act systematically, to degrade Syria’s military capabilities, Syrian support of guerrilla movements beyond its borders, and, further down the line, regimes and organisations within Syria it considers actively hostile, Rabbani said.

“It is a policy that bears numerous similarities to Israel’s approach to Lebanon, particularly southern Lebanon, during the late 1960s and 1970s,” he added.

More importantly, this new pattern of Israeli aggression is certain to make the Syrian crisis more difficult to resolve and even more catastrophic than it already is, Rabbani said. He added that Israel is determined to degrade Syria and keep it weak, and while internal Syrian matters may not have figured prominently or perhaps not even at all in its most recent actions, they eventually will.

And if this new policy is permitted to stand – perhaps even form an important motivation for Israeli policy, as was the case in Lebanon from the mid-1970s onwards.