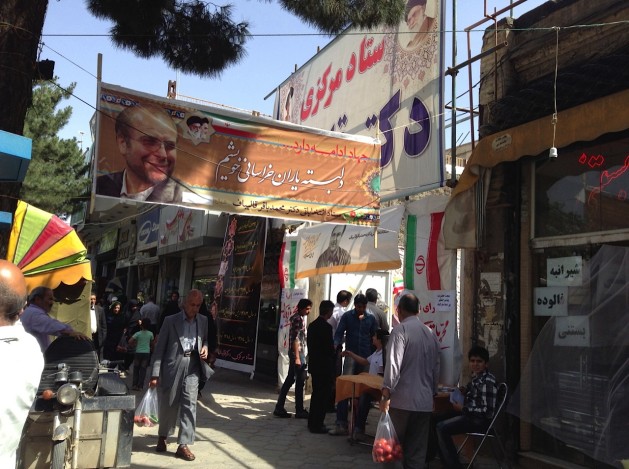 TEHRAN, Iran, Jun 12 2013 (IPS) - Talking to ordinary people in Neishabour and Tehran about Iran’s Jun. 14 presidential election, economic issues seem foremost on their minds. But whom they will vote for is based more on vague promises to pull the economy out of its deep crisis than on well-defined economic programs.Significant differences on economic philosophy divide a confused public about how to end economic stagnation and high inflation.

In the last three decades of the Islamic Republic’s history, Iranians have experienced both market-based economic growth and populist redistribution.

This election cycle would have been a good time to debate which of these two economic development strategies should be used in moving forward.

However, the decision by the Guardian Council to eliminate two important candidates, Ali Akbar Hashemi Rafsanjani and Esfandiar Rahim Mashaei, from the list of those eligible to run has sharply limited the value of this election as a space for vibrant public debate about the issues that are of greatest daily concern to most Iranians.

These two politicians could have represented the contrasting economic strategies and turned the election into a referendum on the past eight years of populist economics practised by the Ahmadinejad administration.

Mr. Rafsanjani, the former two-time president, is well known for his preference for market-based economic growth as a solution to poverty and equity issues.

His elimination from this election has deprived voters of a critical assessment of Mr. Ahmadinejad’s populist program that has inflicted serious damage on Iran’s economy.

A further blow to a meaningful debate on populism came from the elimination of Mr. Mashaei, who was Mr. Ahmadinejad’s close associate and in-law.

It would have been highly interesting, if not very informative, to watch him debate Mr. Rafsanajani on such important issues as the record of the government’s three ambitious populist programs – low-interest loans to small and medium producers, low-cost housing and cash transfers.

What this election should be about is how to achieve a key promise of the Islamic Revolution.

More than three decades ago, a vast majority of Iranians supported the revolution, expecting that it would divide Iran’s oil wealth more equitably.

Early on, Ayatollah Khomeini, the revolution’s leader, tried to limit these expectations by famously saying that “economics is for donkeys”.

But the failure by two previous administrations (Mr. Rafsanjani and Mohammad Khatami, each serving for eight years as president) to reduce inequality has kept the issue of income and wealth distribution at the forefront in recent elections.

Mr. Ahmadinejad came to power in 2005 promising to take the “oil money to peoples’ dinner table”, which he tried to do.

The last two years for which we have survey data, 2010 and 2011, show falling poverty and inequality, but the economy is in shambles.

Prices rose by 40 percent last year according to official figures, and the same surveys show unemployment at about 15 percent overall and twice as high for youth.

It would have been valuable for the public to learn if Mr. Ahmadinejad’s redistribution policies are responsible for the current economic mess, or something else, like incompetence in execution or international sanctions.

What the candidates have said in the short time they have had to campaign is that they will do something different. What and how is not clear.

The four frontrunners, Saeed Jalili, Mohammad-Baqer Qalibaf, Hassan Rowhani and Ali Akbar Velayati, have expressed their differences on how to deal with sanctions.

Sanctions loom large in voter minds, but few believe that whoever is elected will be able to influence Iran’s nuclear policy, which is being tightly directed by the Supreme Leader, Ayatollah Ali Khamenei.

What seems to distinguish these candidates most clearly at this point is social rather than economic issues.

They all promise to reduce inflation, increase employment and run a less corrupt and more efficient administration. The differences exist in emphasis rather than specifics.

Mr. Jalili is the most conservative candidate in the race and closest to Mr. Ahmadinejad in economic philosophy but has also been careful to neither defend nor criticize the latter’s policies.

He has defended Iran’s stance in the nuclear negotiations with the P5+1 group (the United States, Britain, France, China, and Russia plus Germany), which he led in recent years, with the usual anti-Western rhetoric.

By saying the least of any candidate about the economy, he has clearly indicated that economic issues are not his top priority.

In the televised debates, Mr. Jalili made it clear that a more effective enforcement of cultural values was the right way to solve the country’s economic problems.

More specifically, he seemed to reject compromising with the West over Iran’s nuclear program in order to lessen the pain of Western sanctions on ordinary Iranians.

He has not made any public statement regarding the candidates so far, except to request time on national television to respond to their criticisms, which was denied.

Word on the street in Tehran is that Mr. Ahmadinejad secretly roots for Mr. Jalili because he believes a President Jalili would be the most likely to make him look good, not by defending his policies, but by taking the economy further into the deep end.

Mr. Rowhani, the only cleric in the race, is the most moderate candidate among the four frontrunners.

In the eyes of liberal voters, following this week’s departure of reformist candidate Mohammad-Reza Aref (after an explicit request from the popular former president, Mohammad Khatami), Mr. Rowhani has inherited the reformist mantle of Mr. Khatami as well as Mr. Rafsanjani’s pro-business legacy.

Mr. Rowhani energized Iran’s young voters after the second televised debate in which he criticised the heavy hand of security forces in social affairs.

He appears to have gained the same lift that former presidential candidate Mir Hossein Mousavi achieved four years ago upon declaring he would end police enforcement of public chastity.

However, like Mr. Mousavi, Mr. Rowhani has not offered clear economic policies to address the youth’s more serious problems of unemployment and family formation.

A formidable challenge to Mr. Rowhani comes from Mr. Qalibaf, the current mayor of Tehran and a moderate conservative.

During a recent televised debate, they clashed over how the police should treat student protests, but they have not tried to distinguish themselves on how they would help university graduates get jobs.

If the election goes to a second round run-off between these two candidates, which now seems likely, there is a chance that voters will hear more about their approach to revive the economy.

But then the candidates may find it easier to appeal to voters’ emotions than to their pocketbooks.

*Djavad Salehi-Isfahani is a Professor of Economics at Virginia Tech and Non-resident Senior Fellow at the Brookings Institution. Read more of his IPS work here.