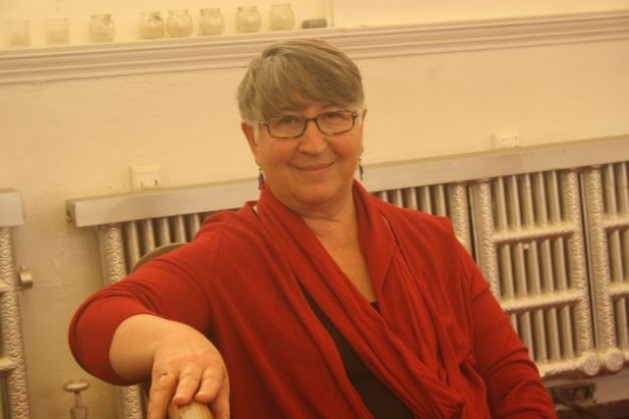 Rabbi Ellen Lippmann serves as an inspiration for other Jewish women who want to serve as rabbis. Credit: Sudeshna Chowdhury/IPS

NEW YORK, Jun 2 2013 (IPS) - Growing up as a child, Trisha Arlin had never seen a woman rabbi. Back then, women were not allowed to read the Torah, nor were they allowed to serve in synagogues.

Arlin felt that Judaism had no place for women like her who wanted to engage in spiritual discussions about the Torah and faith in general. So very early on, she alienated herself from Judaism.

“I was rejected, so I rejected it for many years,” the 59-year-old Arlin told IPS.

It took years of soul-searching and Jewish study before Arlin found her way back to Judaism. She is now pursuing her studies at a rabbinical school in New York City.

It was only in the 1970s and 1980s that women in Reconstructionist, Reform and Conservative branches of Judaism started getting ordained as rabbis. But now the situation is different.

The number of women rabbis in the United States has been increasing significantly every year. This has introduced various reforms in Judaism and opened up new opportunities for female rabbis.

In 2002, more than half of the rabbis ordained from the Hebrew Union College-Jewish Institute of Religion (HUC-JIR) were women. The same trend continued in 2012. Last year, more than 50 percent of rabbinical graduates at the Reconstructionist Rabbinical College were also women.

The ordination of female rabbis in Judaism changed the rabbinate, said Pamela S. Nadell, chair of the department of history and director of the Jewish studies programme at American University.

“It allowed for the bringing of women’s different voices, visions, and perceptions to Judaism,” Nadell told IPS.

For instance, rituals and prayers to deal with the pain of infertility or to celebrate the birth of a child were introduced by women rabbis, Nadell said. Even the language used to invoke the almighty underwent change and was made gender neutral.

“Otherwise, earlier god was a he,” said Ronda Spinak, artistic director of the Jewish Women Theatre (JWT) in Los Angeles. “Now you have prayers to invoke memories of patriarch as well as matriarch.”

According to HUC-JIR, until 2012, a total of 631 women had been ordained as rabbis for the Reform movement of Judaism.

While the number of female rabbis has increased over the last few years, the aggregate number of male rabbis in the United States is far higher than the total number of women rabbis.

Looking at the current trend, women rabbis might be able to bridge the number gap soon, but other issues such as income disparity between male and female rabbis need to be addressed, too, said Spinak.

Spinak wrote a play called “Stories from the fringe: Women Rabbis Revealed” in 2010. As part of her research, she and her team extensively interviewed 18 women rabbis from Los Angeles. She is now working on a documentary that focuses on female rabbis in the United States.

Apart from women rabbis getting paid less on average, Spinak said the “stained glass ceiling” is sometime difficult to break when it comes to jobs and having women rabbis in senior positions. Finding a balance between work and family life remains a challenge.

In spite of women rabbis gaining wider acceptance in Judaism, there are some who are not happy to have women serve as rabbis. For instance, orthodoxy has for long resisted ordination of women as rabbis.

However, Yeshivat Maharat, an institution in New York, is training orthodox women as spiritual leaders. While many might argue that it is a step short of a full-fledged rabbi, it does allow orthodox women to assume more of a leadership role within the rabbinate.

The first batch of students from Yeshivat Maharat will graduate in June this year. Rori Picker Neiss is one of the graduating students.

Growing up in an orthodox community, Neiss said she never wanted to be a rabbi as the role of rabbi was always exclusively held by men. However, she wanted to offer education, spiritual guidance and inspiration for her community.

Her expertise in Judaism might be on par with her male counterparts, but the fact remains that she would not be allowed to add the title of a rabbi before her name.

Neiss sees herself as a “Jewish resource to people”. “I do not care what that is called,” she said.

However, certain titles, such as the word “Rabba” bestowed on orthodox women, connotes the distinction of a rabbi, said Rabbi Jeffrey S. Fox of Yeshivat Maharat.

As a strict orthodox Jew who prays in Orthodox synagogues only, Fox said he believed that “some functions that rabbis do that I think that women may not do – particularly as it relates to prayer leadership.” This might include leading services.

Rabbi Ellen Lippmann disagrees as she herself leads services at synagogues. Among those who come to attend her services are men, women and children.

“My journey as a woman rabbi wasn’t that difficult, but as a gay woman rabbi I had to go through a lot,” Lippmann said.

But Lippmann is not somebody who is deterred easily. She remains a strong voice demanding equality between men and women regardless of their sexual orientation.

Other than orthodoxy, experts say that liberal movements are by and large egalitarian in nature when it comes to having female rabbis. Above all, women rabbis serve as inspiration to other women who want to join the rabbinate.

For example, Lippmann drew inspiration from Sally Jane Priesand who was the first female ordained rabbi in the United States in 1972.

Lippmann, who was inspired by Priesand, now motivates students who want to serve as rabbis.

For Arlin, who is training to be a rabbi, Lippmann and other women rabbis are an inspiration.

“I have finally got my Torah back,” Arlin said.