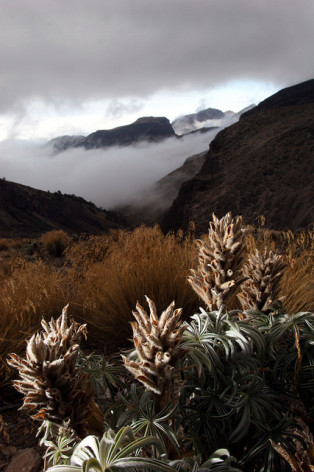 MEXICO CITY, Jun 8 2013 (IPS) - The Climate Change Fund set up in November in Mexico faces enormous challenges such as the enforcement of anti-corruption standards, which make it unlikely that concrete actions will begin this year, according to civil society organisations.

The fund, which will allocate resources to mitigate and adapt to climate change, was created under the General Climate Change Law of June 2012, with an initial budget of only 78,000 dollars, assigned mainly for administrative expenses.

The initiative was adopted in accordance with the global strategy that emerged at the 16th Conference of the Parties to the United Nations Framework Convention on Climate Change (COP 16) held in December 2010 in the southeastern Mexican city of Cancún.

“We know that recipient countries face significant corruption challenges,” and that is a concern because “the Mexican fund may be a model” for other countries that need assistance, Lisa Elges, the head of the Climate Governance Integrity Programme for Transparency International (TI), told IPS.

“A corruption risk assessment is needed, as well as people’s participation and involvement in monitoring the process,” she said.

TI, the global anti-corruption watchdog, is planning to publish in July or August a report on climate finance mapping and assessments which will analyse funds received by nine countries, including Mexico, the Dominican Republic and Panama.

The TI experts found failures of accountability, of dispute settlement mechanisms and of coordination with national funds. In addition there were conflicts of interest between actors involved, such as companies, and a lack of monitoring for projects from initial design to completion.

Mexico’s Climate Change Fund is meant to attract and channel public, private, national and international resources for actions against the effects of climate change, with a priority on adaptation.

Mexico is particularly vulnerable to increasingly frequent and extreme weather events, such as severe drought, intense rains and frosts, for which measures of mitigation and adaptation are essential.

Since 2006, this country of 118 million people has received more than seven billion dollars in loans or donations from the private sector, multilateral bodies and other countries for environmental policies, in response to the government’s call for resources to overcome the challenges, according to the Mexican Centre for Environmental Law (CEMDA).

Among the ongoing projects is the restoration of wetlands in the Gulf of Mexico, financed by the World Bank, and the design of a model for monitoring, verifying and reporting in the forestry sector, an initiative that is due to be launched in 2015, with aid from Norway.

Carlos Tornel, a public policy analyst at CEMDA, told IPS that the climate fund “must have clear rules, accountability and transparency, and should not be the only financing mechanism.”

A report on the flow of resources to Mexico’s climate fund from the public coffers, international institutions and the private sector will be published this month by CEMDA.

In the view of the government of conservative President Enrique Peña Nieto, it is preferable to have a well-defined structure and guidelines in place first, before beginning to finance projects.

“We want to design something that really works well. We have to make it transparent, make it functional, and reduce costs,” Luis Muñozcano, the assistant director general for climate change projects in the environment ministry, told IPS.

Draft guidelines for the climate change fund stipulate the definition of the responsibilities of those involved, procedures for receiving and disbursing funds, a mechanism for accessing information, and transparency in accounting for the resources, among other aspects.

By 2020 a system of financial incentives and subsidies should be in place for adaptation and mitigation measures.

Every year Mexico emits some 748 million tonnes of carbon dioxide (CO2), one of the main greenhouse gases responsible for global warming, according to the most recent measurements collected in 2010 and officially released last December.

The General Climate Change Law establishes a plan to reduce emissions by 30 percent by 2020 and by 50 percent by 2050, with reference to 2000 levels.

Mexico’s Fifth National Communication delivered in 2012 to the United Nations Framework Convention on Climate Change predicts that achieving the planned emissions reduction by 2020 will require 138 billion dollars of investment.

“We want a standardised approach. The issue is to see if money was efficiently used. Moreover, in practical terms, the complaints schemes are not operational at the national level,” said Elges, referring to the global Green Climate Fund created at COP 16 and originally promised starter capital of 30 billion dollars.

At the Cancún meeting it was agreed that industrialised nations should contribute 100 billion dollars a year to that fund from 2020 onwards. The Green Climate Fund is devoted to assisting poor countries to adapt to climate change impacts and to develop low-carbon economies. The World Bank is to administer the resources for the first three years according to the standards of the Convention.

The Green Fund is governed by a council of 24 delegates, with equal numbers from developed and developing nations, who are responsible for use and oversight of the resources.

After South Korea was elected as the headquarters of the Green Climate Fund last year, TI received a complaint from one of the other candidate countries accusing South Korea of buying votes with irregular payments. But the Asian country denied the allegations and the case did not proceed further.

However, Elges saw this as a warning sign of the dark shadows that can haunt these kinds of funds.

The other candidates to host the central office of the Green Climate Fund were Germany, Mexico, Namibia, Poland and Switzerland.

“It remains to be seen who is going to allocate the budget. So far, the finance ministry is the only body responsible,” said Tornel.