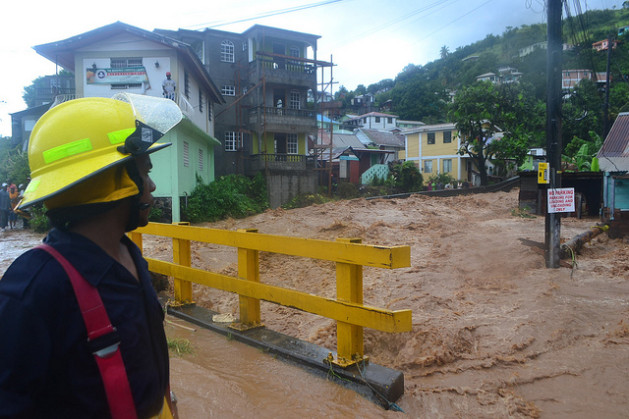 The Green Climate Fund is expected to channel some 100 billion dollars a year to help developing countries counter and adapt to climate change. Impacts include severe flooding, as the Caribbean island nation Dominica experienced in 2011. Credit: Desmond Brown/IPS

WASHINGTON, Mar 12 2013 (IPS) - As the new board of the United Nations Green Climate Fund meets in Berlin this week, activist and watchdog groups here and around the world are expressing frustration over proposed rules they say are already significantly limiting civil society participation in the new initiative.

The fund, created in 2010 under the auspices of the U.N. Framework Convention on Climate Change (UNFCCC), is eventually expected to channel some 100 billion dollars a year to help developing countries counter and adapt to climate change. Yet because it has no fundraising capability itself, the source of that money has yet to be decided upon.

Unfortunately, the whole discussion has become part of a much larger geopolitical struggle, part of much broader narratives.

In weeklong meetings this week, the Green Climate Fund (GCF) board members are slated to engage in critical discussions on that funding model. This will include the role that private sector financing is expected to play, an issue that has divided developed and developing countries.

“Decisions taken at the Green Climate Fund board are central to how the needs of climate vulnerable communities will be met, so it is essential that their deliberations are open and transparent,” Janet Redman, co-director of the Sustainable Energy and Economy Network at the Institute for Policy Studies, a Washington think tank, said Tuesday.

“At this point it seems the board wants to limit public participation, access and voice. That would be a huge step backward.”

On Tuesday, 73 international civil society organisations sent the GCF’s leadership an open letter decrying a lack of rules conducive to their “meaningful” participation.

“The active and engaged participation of civil society at the Board and country level is essential for creating an effective, equitable and environmentally sound Fund that can be responsive to the differentiated needs of men and women, minorities and indigenous peoples increasingly impacted by climate change,” the letter states.

The signatories urge the fund to build on the experiences of other international funds “rather than permitting a retreat to operations that are less transparent and accountable, as is currently the case”.

Among broad policy recommendations and potential procedural tweaks, the letter pushes for a system of permanent observers allowed to participate in all meetings and the broadcasting of board proceedings on the Internet. The signatories also suggest a process by which to accredit stakeholders and “sufficient financial resources … to support their effective participation”.

“I would be pleasantly surprised if the GCF board started to view civil society as valuable partners in shaping the GCF into a 21st century institution based on science and equity, but I’m not going to hold my breath,” Karen Orenstein, a Washington-based campaigner with Friends of the Earth U.S., a watchdog group, told IPS from Berlin.

“Already the interim parametres set up for our participation Wednesday – the first day of the Berlin meeting – are overly restrictive. At some point in the not-too-distant future, though, the marginalisation of civil society in this process is going to become a real liability that will come back to haunt the board.”

Developing countries have keenly watched the development of the GCF. In mid-February, a joint statement from ministers of Brazil, China, India and South Africa urged the prioritisation of the “early and meaningful operationalisation” of the fund.

Yet thus far, progress has been slow. Last year, South Korea agreed to host the institution’s secretariat, and a 24-member executive board has been named, comprising equal numbers of representatives from developed and developing countries.

But so far, significant funding has been notably lacking.

When the fund was set up, developed countries promised 30 billion dollars as starter capital. According to a February statement by Environment Minister Jayanthi Natarajan, however, only around seven billion dollars of that has so far come in, undoubtedly affected in part by austerity concerns in Europe, the United States and elsewhere.

For this reason, many observers are particularly interested in this week’s deliberations over the role that the private sector will play in funding the GCF. Particularly since the 2008 financial crisis started to squeeze national governments, bilateral and multilateral donors, including the United Nations, have increasingly looked for ways to rely on private sector capital.

“Many members of the board from developed countries have said they don’t want to talk about potential sources for the public money, and have focused instead on how to leverage private capital,” the Institute for Policy Studies’ Redman told IPS from Berlin.

“But many developing countries are saying the GCF should be largely funnelling public money, and are talking about the possibility of raising finance through, for instance, taxing financial transactions or carbon. Unfortunately, the whole discussion has become part of a much larger geopolitical struggle, part of much broader narratives.”

Further, when the GCF does engage with the private sector, she cautions, the focus should be not on major multinational investors but rather on local actors interested in developing sustainable national economies.

“The GCF wants to bring about a paradigm shift, but we’re not going to avoid any climate catastrophe unless we get a profound shift in the organisation of our economies,” she says.

“Clearly that includes the private sector, and we certainly want to include private sector entrepreneurs in countries most affected by climate change. But what we can’t do is provide fertile ground for foreign direct investments that look to extract profit from developing countries rather than working to build up sustainable local economies.”

Because the UNFCCC framework offered little guidance on the source of GCF funding, the issue is open to significant interpretation. The U.S. government, among others, has suggested that the 100-billion-dollar pledge, to be raised yearly by 2020, can be made up partially by private sector investments.

Yet Friends of the Earth’s Orenstein and others have strongly cautioned against this reading.

“Private climate finance cannot be a substitute for direct public support – the 100 billion dollars developed countries have promised must be made up entirely of public funds,” she says.

“Private finance would be especially difficult to deploy in low and lower-middle income countries. Many areas in need of funding, especially adaptation, will simply not turn a profit.”

While advocates are hoping this week to lay a progressive conceptual basis for the funding discussion, the board’s discussion on an overall model for the GCF is expected to stretch until at least September.